In spring, leaves and flowers develop from the material contained inside buds, and budding and flowering mark the start of a new growing season. The tissue in buds has a high moisture content and is extremely susceptible to frost. Following a damaging frost, latent vegetative buds may begin to grow, drawing on the plant’s starch reserves, but if floral buds are frozen, no flower — and thus no fruit — will be produced until the following year. Some tree species and varieties are more frost resistant than others, depending in particular on the speed they develop when temperatures get milder at the end of winter.

Did you experience damage caused by the late frost in April 2022?

Researchers from CNRS and INRAE need your help to assess the extent of the damage in order to better understand the vulnerability of different species to frost events, which are increasingly common. Share your observations.

For a number of years now, primary plant development stages (bud break, flowering, fruit maturity) have been several weeks ahead of usual times. In order to evaluate the impacts of climate change, INRAE established a network of experimental fruit orchard observatories in France. The INRAE Orchard Observatory (DIVAE) network has six sites throughout the country in a variety of environmental and climatic conditions in Angers, Bellegarde, Clermont-Ferrand, Gotheron, Mauguio and Toulenne. DIVAE research with help to understand and predict the impact of weather on the biology of various fruit trees species (apricot, cherry, peach, apple). Five varieties of each species are being grown, covering a range of early and late development behaviours. In particular, DIVAE will investigate phenology, the study of how periodic events in biological life cycles are influenced by seasonal variation in climate. DIVAE findings on fruit trees are being incorporated into TEMPO, France’s national network of phenology observatories for all living things (plants and animals, both wild and domesticated). 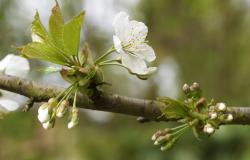 Participatory research Observatory for the Seasons

The Observatory for the Seasons is a participatory research programme for people to observe seasonal patterns in plants and animals in order to collect data that can be of particular use when studying climate change and biodiversity.

By selecting contrasting varieties of tree species, DIVAE will be able to study the effects of a changing climate on commercial fruit trees, and woody species more generally, by looking at the role of a plant’s genotype, the environment and the interaction between them. DIVAE was established in 2015, and trees planted then are now coming to maturity. This will allow essential data to be collected on the impact of weather events on plant phenology, such as early bud break, late frost, water stress, fruit development, unseasonable winter temperatures and flowering. Other research activities can also make use of the DIVAE network, so long as the fruit trees’ phenological cycle — the foundation for creating the network — is not disturbed.

Growth stages are assessed and measured in a standardised way across all the sites, including leaf senescence, fruiting, flowering, bud break and overall length of growing period. Certain sites also monitor the end of dormancy to assess chilling requirements. Fruit maturity is assessed using a variety of factors depending on the species, including colour, firmness, and starch and sugar content.

The DIVAE network will allow researchers to make projections for future orchards in various regions of France and to help select varieties that will be adapted to predicted climate conditions in the near term for the country’s major fruit-growing regions. The major risk factors being studied include earlier flowering in relation to possible frosts, lengthening of the flowering period and failed bud break caused by lack of winter cold, and early fruit fall caused by water stress. Fruit growers are directly affected by these possible changes.

Phenological data will make it possible to explore the physiological traits involved in tree development and behaviour, as well as the hormone signalling of dormancy status in a number of cherry varieties (Vimont et al., 2021) and the role of carbohydrates and water content in predicting frost hardiness in various tree species (Baffoin et al., 2021). The DIVAE network is using an open science approach to make monitoring data available to the scientific and agricultural community via an open-access database. Data from two sites — Angers and Toulenne — are already accessible on data.inrae.fr. 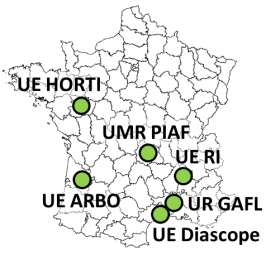 The impact of a false spring on tree growth
Researchers at the Integrative Physics and Physiology of Trees in Fluctuating Environments Joint Research Unit (UMR PIAF) at the University of Clermont Auvergne are trying to understand how a tree’s response to a changing thermal environment can predict its frost hardiness.
The PIAF joint research unit is looking at the physical and physiological traits involved in tree development and behaviour in the context of climate change. In the decades to come, environmental conditions will continue to intensify as temperatures (including frosts), precipitation and winds become more variable due to climate change. False springs have immediate disruptive effects (killing new growth and flowers) but also cause longer-term stress as well, impacting tree growth as effected trees are weakened by the need to draw on their reserves. Some buds are killed, as are certain parts of the cambium (tissue layer that produces new wood). Understanding the survival mechanism of these organs and the resilience strategies trees employ to compensate for damage cause by severe weather events is important to help tree crops adapt to the impacts of climate change. Study findings will be available in 2022.
Frost and drought: when trees face successive periods of stress

Climate change means that temperatures are increasing, but are also increasingly volatile, creating a greater risk of severe weather episodes. Climate variability is likely to increase the risk that trees will be exposed to periods of frost and drought.
Researchers at INRAE have been studying the interaction between frost and drought and how, when periods of frost and drought follow each other, they may make trees more vulnerable to later periods of frost or drought (Charrier et al. 2021). They have also studied how these stress factors may affect processes related to tree phenology, such as dormancy release, bud break, flowering and leaf fall. They demonstrated that the combination of frost and drought can, at different time scales, increase vulnerability in trees by affecting their water balance or carbon metabolism. Changes in a tree’s annual cycle may, however, temper the period or duration of vulnerability to these stress factors.
To better predict the cumulative effects of these stress factors on tree physiology and survival outcomes, researchers recommend revisiting current ecophysiological models in particular by incorporating seasonality parameters likely to affect phenology.

PRESS RELEASE - Researchers from INRAE and Duke University have concluded that tree fecundity peaks or plateaus when trees reach adult size, and then begins to decline. Published on 17 August 2021 in Proceedings of the National Academy of Sciences, the study examines 597 species from more than 500 sites in North America, South America, Asia, Europe and Africa. Their work has led to the development of a calibrated model to accurately calculate long-term tree fecundity.

PRESS RELEASE - A study published in Global Change Biology recently established that the smallest, slowest-growing tropical species tended to tolerate drought better. This finding should make it easier to anticipate the effects of climate change on demographics and the future landscape of tropical forests.

PRESS RELEASE - Twenty-four plant species from the remote Atacama Desert in South America are the stars of a joint project between INRAE, the University of Bordeaux and the Pontifical Catholic University of Chile. The project has been looking at plant resilience mechanisms in this extreme environment, one of the most arid on the planet. Innovative use of multi-species analysis has enabled the scientists to discover molecular markers common to all 24 species that can be used to predict differences in the plants’ environment (altitudes, variations in temperature and water availability). Their results, published in New Phytologist, reveal the existence of core mechanisms used by a wide range of plants to adapt to extreme conditions. The approach developed by the team is applicable to cultivated species in more temperate climates, offering an effective method to identify mechanisms that would enable crops to adapt to environmental stresses.