The International Research Initiative "Soils and climate change” emerged from the 4 per 1000 initiative proposed by France during the 2015 United Nations Climate Change Conference (COP 21). It established a global alliance for basic research (during a preparation phase funded by the European Commission) that is linked to innovation-focused projects centred on carbon storage and carbon monitoring in soils, notably via the Climate Knowledge and Innovation Community (Climate KIC).

Thanks to European and international research programmes, significant advances have been made in fields such as genome sequencing. Global information systems make it possible to share data drawn from observations of the Earth (GEOSS), CO2 exchanges (FluxNet), and plant functional traits (TRY), to name a few examples. INRAE has founded or coordinates several major research programmes in its fields of specialty, which it uses to bolster its scientific priorities; these programmes include the Wheat Initiative (started in 2011), the Global Research Alliance on Agricultural Greenhouse Gases (GRA; started in 2010), and the 4 per 1000 initiative (started in 2015). 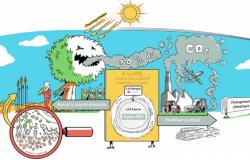 INRAE's partners are not just found in European and Mediterranean countries. They are also in the US, Canada, Australia, China, Brazil, Japan, Mexico, New Zealand, Argentina, South Africa, and India. Their presence is especially notable in the number of co-authored publications (articles, reviews, proceeding papers and letters) and the presence of shared collaborative structures. Researchers from around 150 countries have co-authored papers with INRAE scientists.