Committing to the promotion of gender mainstreaming and the elimination of discrimination means providing everyone with the opportunity to use their skills and recognising and showcasing the wealth that differences can bring, as they are factors of innovation and cohesion. A major challenge and focus of interest for INRAE that have been assigned in particular to Catherine Beaumont, Head of Equality and Non-Discrimination, and Martine Dubois, “Diversity” project leader in the Human Resources and Sustainable Development Directorate.

In January 2020, INRAE was awarded the Diversity and Equality at Work certification, thereby becoming the first public research institution to earn this dual Alliance standard. This certification, granted by AFNOR based on the actions taken at four pilot centres, recognises INRAE's commitment to promoting diversity, eliminating discrimination and stereotypes, and defending gender equality in the workplace. It is a follow up to the European Human Resources Strategy for Researchers (HRS4R) label that INRAE's HR strategy has had since 2010. Initially intended for researchers and then extended to all staff, the strategy's certification was renewed in 2014 and 2019. It is part of a longstanding approach, bolstered by a series of HR action plans that began in 2013.

Work on action plans to promote Diversity and Equality in the Workplace at INRAE “is a long-term project that conveys outstanding human and ethical values,” explained Martine Dubois.

Now this approach needs to be pursued and strengthened. Two action plans, i.e. one for each component, have now emerged.

This document sets out the main thrusts of INRAE's “Gender Equality in the Workplace” action plan developed based on AFNOR specifications and public service reform legislation, in cooperation with the Institute's various governing bodies and trade unions and in line with staff concerns.

Communication and training are the central pillars of these action plans.

In terms of training, awareness sessions for all management staff from the Executive to unit directors, selection panel members and chairs, and the HR network. For communication, press releases on “Women's Day”, drafting articles for in-house newsletters, holding activity or exhibit days at the research centres.

Disability, age, involvement in a trade union, religion, origin or family situation are the discrimination criteria INRAE has decided to focus on first in its Diversity plan. This involves enhancing the quality of the induction and integration of people with disabilities, enriching career paths and increasing knowledge transmission, facilitating the on-boarding of new staff, particularly those from abroad, and their families, raising awareness about the importance of social dialogue or deconstructing stereotypes about religions.

For the Equality component, our commitments target increasing the role of women at the highest rungs of the job ladder and, in that way, reducing the pay gap, promoting greater diversity and interaction between job categories and addressing related perceptions, strengthening INRAE's role in networks, facilitating a better work-life balance, and preventing and eliminating sexual and/or sexist abuse.

“At INRAE, men and women have the same rights and pay scales, as is the case for all public institutions. While the situation here is more balanced than in other institutions, there is still scope for improvement, which means we need to take action,” explained Catherine Beaumont.

The 2018 comparative assessment will be updated, not only to assess the situation but also to monitor and refine the work already done, with a multi-year overview.

Other actions involve aspects of both plans, such as the independent counselling centre operated by AlloDiscrim to allow staff to report individual situations perceived as discrimination or sexual and/or sexist abuse.

Both action plans are based on HR agents in the field closest to local concerns and achievements as well as on a Diversity-Equality Committee, which serves as an exchange and consultation forum and is specifically in charge of monitoring actions. A network of Diversity-Equality advisers will soon be set up to support those efforts.

“The AFNOR certification process is a useful guide for successfully dealing with this fascinating topic, which, now more than ever, is a concern for today's society,” said Catherine Beaumont.

A commitment that mirrors our researchers' work and is supported by our two advisers through their own core values.

A means for preventing discrimination and sexual and/or sexist abuse 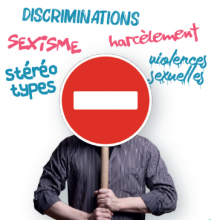 To allow our staff to report individual situations perceived as discrimination or sexual and/or sexist abuse, in September 2019 INRAE set up an independent counselling centre run by Allodiscrim.
Made up of specialised legal counsels, this centre allows staff to get information and advice based on an initial assessment of their situation with the assurance of expertise, independence, neutrality and confidentiality.
This counselling centre rounds out the range of measures INRAE now has in place to combat discrimination and sexual and/or sexist abuse.

Less than 30% of researchers around the world are women*. The International Day of Women and Girls in Science, celebrated on 11 February, aims to encourage women to choose scientific careers and it is the perfect day to turn the spotlight on INRAE’s women scientists.

Gender equality and the fight against discrimination: INRAE is the 1st public research institution to be awarded dual Equality-Diversity accreditation

PRESS RELEASE - By awarding INRAE the Diversity and Equality at Work certification, jointly known as the "Alliance standard", AFNOR has acknowledged the Institute's commitment to promoting diversity, eliminating discrimination and defending gender equality in the workplace*. This commitment extends and strengthens the actions the Institute has carried out in those areas for a number of years now, in compliance with the European Human Resources Strategy for Researchers certification – HRS4R – it was awarded in 2010. Through the proactive approach the Institute initiated in 2018 with the support of the French Ministries of Higher Education, Research and Innovation, National Education and Youth, together with the Ministry of Agriculture and Food, INRAE is the first public research institution to earn this dual Alliance standard.

Every year, International Women’s Day on 8 March throws the spotlight on the fight against gender inequalities. INRAE is engaged in these efforts through numerous actions that are gradually bearing fruit, even though certain inequalities and stereotypes still need to be rooted out, today and every other day of the year.