CiTIQUE is made up of three parts: an app where users record tick bites and tick bites on their pets; a tick library — the only one of its kind in Europe — where users can send the ticks they’ve been bitten by for further analysis; and a database to link all the different information together. The data give particular insight into when and where tick bites occur and which diseases (viruses, bacteria) they carry.

What citizens bring to research

In sending the ticks that have bitten them, citizens are making a unique contribution to our understanding of the risks associated with ticks. “These are data that we cannot acquire in another way,” says Pascale Frey-Klett, the programme’s co-founder with Jean-François Cosson (1). “We know how to collect ticks in nature, but there is no way to get information about tick bites other than through the participation of citizens. Since the start of the project in 2017, the data collected have proven very useful in prevention efforts. In particular, we have seen that 25% of reported tick bites happen in the garden, and 4% happen in the home. Risk in these situations is underestimated, and few people think to protect themselves from ticks when they are in their own homes.”

Another way of doing research

Citizen contributions go well beyond sending in ticks for analysis. Since the beginning of the CiTIQUE project, researchers have welcomed participants from all backgrounds in a dedicated laboratory (2) to participate in research training courses in real conditions that have led to new scientific findings. One such finding, that came to light following a number of training course cycles, was that the data showed that pets were a likely contributing factor in tick bites that occurred around the home. “The trainees themselves had raised the question,” says Jonas Durand, who has been overseeing CITIQUE training courses since 2019. “It’s a question they were able to also answer themselves by following a rigorous and exacting scientific process. They first identified the tick species in the samples in the tick library that had bitten dogs and cats, and noted that these species also bit humans. They then searched ticks for the bacteria that causes Lyme disease. Data from 21 training course cohorts with more than 300 participants made it possible to calculate that around 6% of dog-biting ticks, and 15% of cat-biting ticks carried the bacteria that causes Lyme disease. This important finding highlights the need for heightened protection of pets against ticks, and will lead to a scientific publication.” 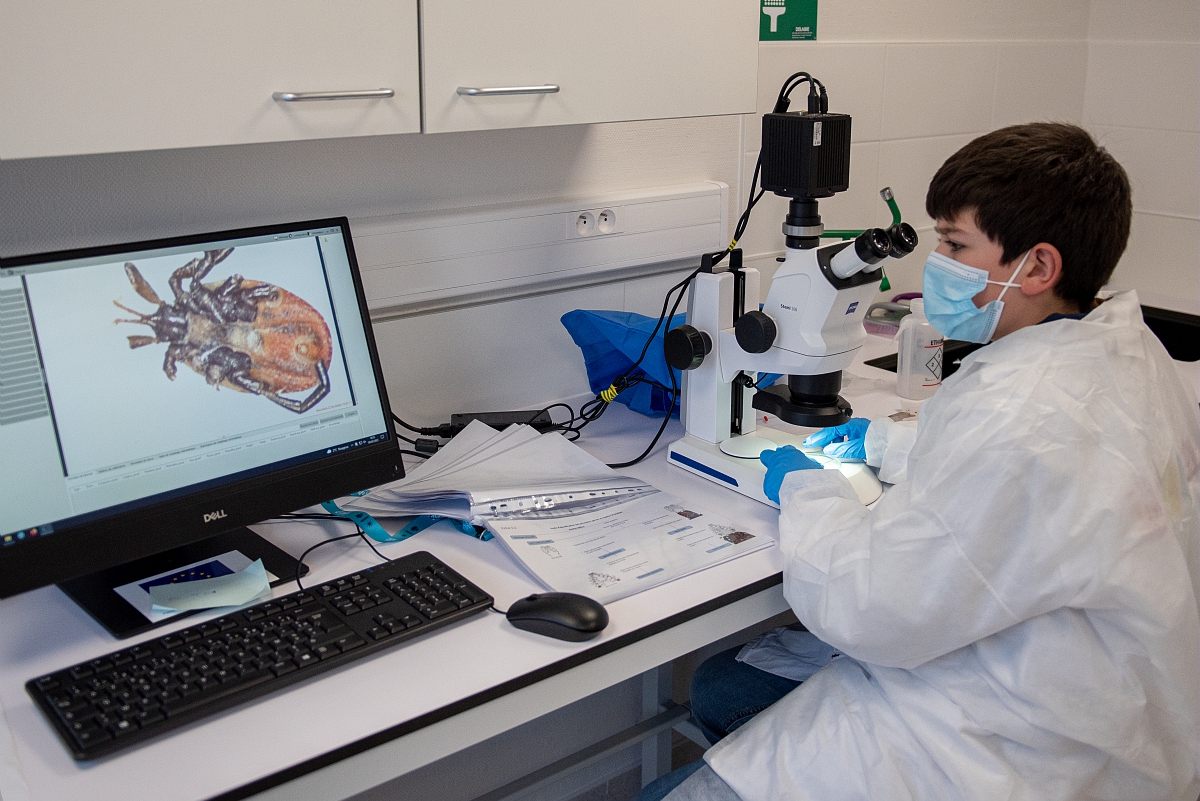 “I didn’t know it took so long and that it was so difficult to find answers” Marie, age 11

Citizen scientists contribute new ideas, and many are keen on experimentation. “We’re in direct contact with the citizens and try to respond to the questions they send us,” says Pascale Frey-Klett. “We worked together with one person who wanted to test a system in her garden using tubes lined with cotton wool treated with tick repellent to prevent the spread of ticks via small rodents. Together, we developed a rigorous protocol for counting ticks in order to test the effectiveness of the system.”

CiTIQUE’s scale — with more than 70,000 tick reports and 50,000 ticks preserved in the tick library — also led to other significant findings. In human tick bites, 30% of ticks carried at least one disease pathogen. It is worth noting, however, that a tick bite does not automatically mean a person will become ill. Ticks transmit pathogens via their saliva; the process is complex and depends notably on the duration of the bite.

“Our interactions with citizens provide support and clear scientific information on ticks, and offer reassurances to people who may be concerned and receiving conflicting information, particularly about Lyme disease (3),” says Pascale Frey-Klett. “We sometimes challenge conventional wisdom, such as the idea that a person can know if they’ve been infected by testing the tick that bit them (4). If a tick bears a pathogen, it does not necessarily transmit it with a bite. At the same time, the absence of a pathogen should not reassure a person either, given that it is not possible to test every tick that is sent in. For that reason, we don’t send personalised responses to the people who send in tick samples. We do, however, offer clear prevention advice: remove the tick as soon as possible and do not use products, such as alcohol or soap, that put stress on the tick and may trigger the transmission of pathogens the tick may be carrying.” 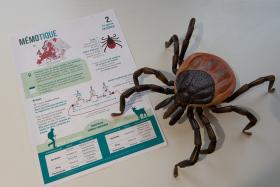 CiTIQUE’s primary function is as a long-term observatory for tick ecology and tick-borne diseases, their distribution in France and the impact of climate change on these. In particular, the movement of invasive species, such as Hyalomma marginatum, into new areas is being monitored in collaboration with the French Agricultural Research Centre for International Development (CIRAD) (read the article: New tick species and tick-borne diseases found in France [in French]).

The data that CiTIQUE generates also serve as a springboard for a number of other research projects. Through CiTIQUE, it was possible to monitor Lyme disease symptoms from a cohort of people who had possibly been exposed to the disease, and to develop a monitoring questionnaire (see Ohticks project [in French]). CiTIQUE was also able to make a contribution in the field of social sciences through a Master’s research project showing that participating in CiTIQUE had an impact on feelings of empowerment and the construction of a positive social identity in young people aged 12 on average.

Partnerships and representatives: keys to success

“At the start of the project in 2017 to 2019, together with Jean-François Cosson, we were proactive in promoting CiTIQUE. We met with associations, participated in the Paris International Agricultural Show, engaged with the press, and so on. We also drew on the Nancy-Champenoux Permanent Centre for Environmental Initiatives (CPIE [in French])(5) to help promote the project,” says Pascale Frey-Klett. “Very quickly, the project grew, and now it’s our partners that come to us.”

Irene Carravieri, who initially worked at INRAE and since moved to the Nancy-Champenoux CPIE, manages the tick library and CiTIQUE’s many partnerships. “It’s a really strong network with CiTIQUE at the hub. We recently, for example, reached a partnership agreement with France’s National Forest Ownership Centre (CNPF [in French]) and the National Forest Office (ONF [in French]) to promote tick-bite prevention in forestry workers who are particularly exposed to tick bites. We also work with healthcare professionals, such as pharmacists, doctors and veterinarians, to raise awareness of the work of CiTIQUE and to promote tick-bite prevention. We also train volunteers to act as CiTIQUE representatives in different regions of France.”

A programme in constant evolution

CiTIQUE began as a regional project with regional funding; it now operates on a national scale. A parliamentary report on France’s national plan for Lyme diseases highlighted the value of CiTIQUE’s work in 2021, and CiTIQUE’s support to public and health policy is widely recognised. “We are in contact with the Ministry of Health to secure the necessary means to pursue and strengthen the programme, whose scope now goes beyond research alone,” says Pascale Frey-Klett.

The Prize for Participatory Research was established by INRAE in 2021 under the aegis of the French Ministry of Higher Education, Research and Innovation as a part of new legislation on research programming. The Prize will highlight research projects that bring together scientists and non-scientists, be it to collect data or with direct involvement in the research process itself. Read the article (in French).

Tick microbiota and its role in carrying and transmitting pathogens

PRESS RELEASE - Ticks are among the main vectors of pathogens affecting both humans and animals, and thus, pose a serious threat to public and veterinary health. In addition to pathogens, tick microbiota is composed of other microorganisms, with whom they live in symbiosis. Researchers from INRAE and the University of Zaragoza (Spain) conducted a three-year field study to analyse the microbiota of Ixodes Ricinus—a tick vector of the bacteria responsible for Lyme disease—in order to understand its role in the acquisition and transmission of pathogens. Their results, published on 3 July 2021 in Microbiome, show that the structure and composition of tick microbiota evolve over time, and highlight interactions between certain members of the microbiota and pathogens. This study opens up new research opportunities for the development of natural pest control strategies against ticks.

Gwenaël Vourc’h: the One Health approach, now more than ever

Research Director at the Epidemiology of Animal and Zoonotic Diseases (EPIA) Joint Research Unit, for the past two decades Gwenaël Vourc’h has focused on ecology, biodiversity and emerging infectious diseases - topics of particular interest now with the Covid-19 pandemic, which has shed light on the urgent need to consider human health as inextricably linked to the health of our ecosystems.

PRESS RELEASE - River networks are among Earth’s most threatened hotspots of biodiversity and are essential for human wellbeing. Climate change and increasing human water use are causing more rivers and streams to dry, but these drying river networks have received little attention. DRYvER is a Horizon 2020 project which will collect, analyse and model data from drying river networks across two continents—Europe and South America—to create a novel global meta-system approach that incorporates hydrology, socioeconomics, ecology and biogeochemistry in order to craft strategies, tools, guidelines, and recommendations for adaptive management of river networks.