When wolves come to France

France signed the Bern Convention on the Conservation of European Wildlife and Natural Habitats in 1989 and ratified the European Union (EU) Habitat-Fauna-Flora Directive in 1992. The European Grey Wolf is among the wild species classified as 'strictly protected' in France. France has therefore made a commitment to the EU to welcome and ensure the development of a wolf population that is "in a favorable state of conservation."

The first wolves came from Italy and settled in the Mercantour National Park, which is located in the southernmost corner of the French Alps, along the Italian border. Wolf presence in France was first revealed officially in 1993, when newcomers had already formed a pack of 6. Since then, 27 years later, wolves have reproduced considerably (current estimated rate is +20% per year) and have spread over about a third of the country: almost all of eastern France, from the Alps to the Vosges and Meuse regions in the north, all over Provence, and also in the south of the Massif Central and parts of the Pyrenees.

The wolf packs, which at the end of winter of 2019-2020 (1) amounted to 81 (including three being cross-border), are all located in the French Alps and Jura. The south-eastern part of France, with its extensive and almost contiguous National and Regional Parks, is a favorable area for the dispersal of wolves in Europe. But these lands have also been used and maintained for centuries by grazing livestock, which helps to shape the landscape mosaics and provides favorable habitats for many other protected wild species. Moreover, since 1992 livestock farmers have been encouraged through European and French public policies and funding to help conserve and restore, through appropriate grazing, these areas which are rich in remarkable species of flora and fauna.

Livestock farming systems in the south-eastern part of France generally practice year-round grazing, including summer and winter long-range transhumance, in often rugged, shrubby and partly wooded landscapes, making herds highly vulnerable to predation. This is why, over the course of successive national "Wolf Action Plans"(2), France has encouraged breeders to protect themselves with techniques inspired by countries where wolves have always been present: livestock guarding dogs, secured fences, reinforced human presence, systematic regrouping of animals at night within enclosures. Annual costs now amount to €38 million, 90% of which is for herd protection measures (secured fences, dogs, supplementary humans’ salaries, etc.) and 10% for compensation to farmers for their victims. 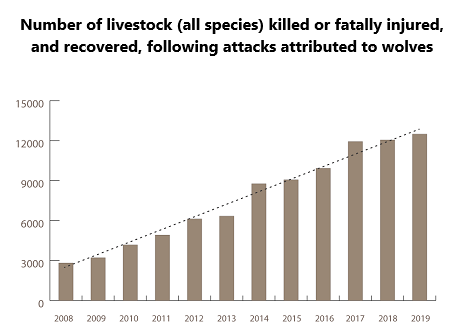 And yet, about 580 wolves in France adversely impact more than 15,000 livestock per year (sheep, cattle, goats, horses), if we also take into account the animals that have disappeared following wolf attacks. This is apparently a record within the UE, shared with some Atlantic regions of Spain. More worryingly, the number of livestock victims has been increasing linearly and almost constantly over the last 12 years, with 1,000 more animals killed each year. Predation strongly impacts livestock systems that practice grazing, whether in the mountains, hilly regions or even in the plains. In the French alpine region, an area where wolves have been present for a quarter century, more than 90% of successful attacks take place on farms that have adopted the recommended means of protection, a condition verified by OFB staff who have assessed the damage. The indirect impacts of predation should not be forgotten either: following attacks, the animals are stressed and, in addition to abortions and loss of body condition, they sometimes refuse to graze for 2 to 3 years on the places where they have experienced a wolf attack.

Over the past decade or so, wolf attacks have been observed increasingly in France close to farms, villages, peri-urban settlements and roads, both night and day, and even in livestock night pens. 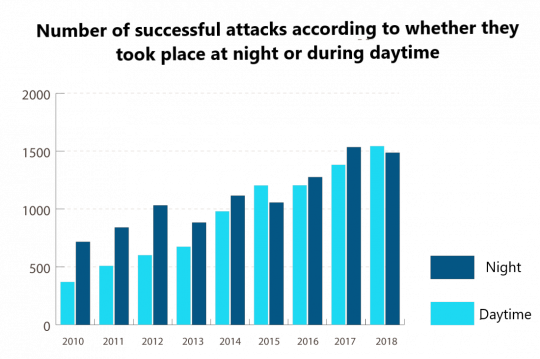 The reason is to be found in the highly intelligent, opportunistic and particularly adaptable nature of these predators, probably taking advantage of their legal status as a strictly protected species in France. Over the years, they have learned to circumvent the aforementioned means of herd protection, and above all, they no longer seem to fear humans close to livestock. Moreover, for more than two decades, people in France have not been allowed to actively repel wolves, including with a rifle. This situation leads either to the abandonment of long-established grazed areas that have become far too vulnerable, or to an escalation in the means of protection. The accumulation of livestock guarding dogs (up to more than 10 dogs per farm) can make grazing lands quite unfit for any other users including hikers, bikers, hunters, etc. and tourists which is a major concern for the mayors of these areas. The situation is similar in several other European countries, or even elsewhere in the world, when protected predators no longer consider humans and their livestock farming activities as a danger.

Now what? What are the solutions for improving the coexistence between wolves and livestock farming?

Eradicating the wolf is not an option. Neither is sheltering livestock permanently in secured buildings.

Clearly, the failure to protect livestock is obvious. How can the situation be improved? Eradicating the predator is not an option. Neither is sheltering livestock permanently in secure buildings. It would of course be conceivable, and it is under way, to continue and reinforce the current means of confining herds, together with scaring off and repelling the predator: raising and burying fences, stress sensor collars on domestic prey, wolf detector drones with repellent spraying, spreading urine and droppings of foreign wolves all along the perimeters of pastures, etc. The advantage of these approaches is that they correspond well to the regulatory terms of the European Habitats Directive, as they favor all possible non-lethal measures against a predator under strict protection status. Their main drawbacks are: 1. the costs of livestock protection, which in France already amount to 25 to 35 million euros per year, are exploding; 2. they are unsuitable for farming systems with animals being grazed in different groups and in fenced pastures scattered across the landscape; 3. they do not resolve the conflicts of multiple-use of countryside, particularly with hikers and hunters, including those accompanied by their dogs.

Associating the presence of humans close to livestock with real danger

Another way to ensure the resilience and viability of grazing herbivore farming systems is to re-establish a reciprocal relationship between wolves and humans. It can be seen as the establishment of a form of mutual respect based on clear signals and strict rules, to be recalled from time to time if necessary. This reciprocity implies the possible use of lethal means (shooting and/or trapping) before, during or just after an attack, to eliminate individuals or groups that are too insistent and to associate the presence of humans close to livestock with real danger. The effectiveness of non-lethal means of protection and repulsion should be improved, due to the restoration of wolves' fear of humans (risk of serious injury or death). These means would then act as a reminder of the danger in case of non-compliance, and would no longer be considered as supposedly impassable barriers. This approach has already proved to be effective in countries where humans and wolves have been living in close proximity for a long time, particularly in Central Asia. It has the advantage of giving back to the breeders a way to react immediately, by targeting the most insistent wolves, while limiting the number to be eliminated.

Managing relationships with opportunistic, smart and highly adaptable predators such as wolves remains complex and particularly dynamic. It requires, according to researchers in the COADAPHT Network (see insert below), an ongoing process of co-adaptation between wolves and humans, which cannot rely solely on farmers and herders, but must be designed and managed collectively at each local territory level.

Has the possibility of shooting wolves been lacking in France’s livestock protection measures? 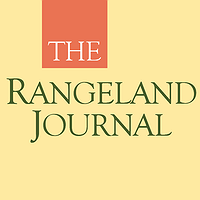 In January 2021, researchers from the COADAPHT network have published a synthesis about the situation with wolves and livestock in France in an international scientific journal: The Rangeland Journal. They show that, since the arrival of the first wolves in the 1990s, the number of livestock killed or fatally injured has increased until 2017 almost continuously and in proportion to the estimated national wolf population. The massive introduction of livestock non-lethal protection means in the early 2000s (livestock guardian dogs, secured fences) halted this increase, but only for a limited time, before losses increased again in proportion to the wolf population number. Since 2016 mostly, in addition to non-lethal means of protection, breeders who have suffered several attacks are also authorized, within all concerned areas and  by way of derogation to the law, to carry out defensive shootings in the close vicinity of their herds. Based on their experiences in countries where wolves have always been present (Balkans, Poland and Central Asia), as well as in the North-Western United States, where wolves have been reintroduced, monitored and sometimes eliminated when they attack livestock, the researchers suggest that breeders should be allowed in France to defend their herds with shots without having to wait until several attacks have already taken place. The main reason for this is that when one or more wolves have already successfully attacked livestock in a given place and season, they are then much more difficult to chase from that place. The aim, in the end, is to associate in the wolves' minds the presence of humans close to livestock with real and severe danger. 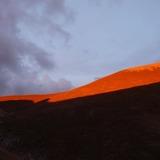 Created in 2016, the research network brings together people from several French research bodies (INRAE, CNRS, Montpellier SupAgro and Cerpam) interested in the processes of coadaptation between livestock predators and humans in their territories. Among its objectives: to feed public policy developments and contribute to various forms of debate, from local to international.

The main objective of the network is to facilitate the exchange and synthesis of scientific knowledge in France and internationally. The network is also developing a multidisciplinary research program with contributions from local, national and international partners. It gives priority investigating experiential knowledge, skills and practices, of people involved with livestock predation management at local and regional scales.

A first in tree research: European trees planted in China to identify potentially invasive species in our forests

PRESS RELEASE - Most of the exotic species which attack plants in Europe now come from Asia. INRA scientists, together with teams from the Academy of Sciences in Beijing and the Forestry University in Zhejiang have devised a new method for detecting potential invaders in their region of origin before they are introduced on another continent. European sentinel trees were planted in China for four years, and during this period, the ability of Chinese insect and fungal pathogens to colonize these trees was studied. Two articles in PLoS ONE present the results of this study, including those dealing with insects, published online on 20 May 2015.