Reconciling crop productivity and biodiversity maintenance is one of the main challenges of agriculture worldwide. Weed management is recognized to be a key point point for ecological intensification in agriculture because weeds can generate severe yield losses but also represent the base of agricultural trophic networks. Therefore, research in weed science has often opposed two different schools of thought. The drastic deline of biodiversity in agricultural landscapes has either been considered as a sign of efficient weed management or an erosion of the natural capital on which sustainable crop production is founded (e.g. support for pollination). Scientists from INRA and the Scuola Superiore Sant’Anna (Pisa, Italy) seeked to reconcile these two seemingly opposite visions.

Weed:crop competition has historically been studied in experiments which considered only one weed species at a time. Hence, little is known about the competitive effect of weeds in complex communities (multiple weed species), which is the most frequent scenario in agricultural fields. Nevertheless, major yield losses may simply arise from the dominance of a few competitive species. Moreover, a higher diversity of traits (characteristics) within the weed community could induce complementarity in resource use (light, water, nitrogen…) and alleviate weed:crop competition. Therefore, the authors quantified the effect of naturally occurring weed communities and the diversity of their composition on winter wheat yield, across 54 zones (36 unweeded, 18 weeded) and 3 years.

The scientists established that out of the six weed communities identified, only four generated significant yield losses in unweeded zones, ranging from 19 to 56%. The number of ears per plant and the number of grains per ear (yield components) was systematically affected when grain yield losses were detected.

Weed diversity was characterized in terms of taxonomy (i.e. evenness of observed species) and function (i.e. diversity of species traits), based on weed biomass data. Evenness is maximal when total weed community biomass is equally divided among species1. Results show that when community evenness was high, weed biomass was low and weed:crop competition was alleviated. In this case, yield losses are reduced because all weed species produce low biomass. Authors also reveal a positive effect of weed functional diversity on winter wheat yield, even though no relationship with weed biomass was observed. This could hint that a higher diversity of traits within the weed community limits competition with the crop and hence, yield losses. 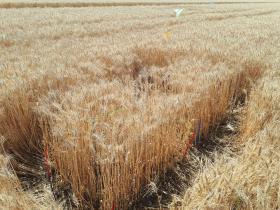 These relationships do not imply that high crop productivity is necessarily associated with high weed diversity but rather that, in the presence of weeds, high evenness limits the probability of dominant and competitive species susceptible of generating important yield losses. Moreover, authors insist that the generality of these results needs to be confirmed in other production situations (i.e. climate, crops, weed species pool, resource availability…).

Current weeding practices target competitive and dominant species, but are not harmless towards subordinate species. Authors argue that weeding operations should exclusively target competitive and dominant species. However, current weed control practices do not allow targeting a specific species in a complex community. Therefore, future studies need to identify if weed diversity could rather be indirectly promoted by diversifying weed management tools.

1Evenness is a diversity indicator commonly used in community ecology. A community is said to be « even » when each unit (here species) is equally represented (here in terms of biomass). On the contrary, a community is said to be « uneven » (unbalanced) when one or a few species dominates (here in terms of biomass). In other words : if we observe 5 species which total up to 100g/m², an « even » community will show 20g/m²/species whereas an « uneven » community will show, for example, one species which produces 90g/m² and 4 others which produce 2.5g/m² each. In the latter case, one species dominates, and can be considered as noxious.

Link to the article