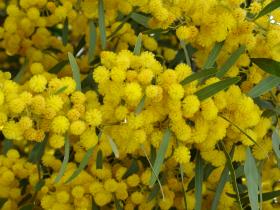 Do existing plants represent all theoretically possible combinations of structure and function for growth, survival and reproduction? To answer this question an international team from 14 countries, led by the Argentine scientist Sandra Díaz, analyzed the most comprehensive global data set of essential plant functional traits ever compiled, containing plants ranging from Arabidopsis to Araucaria, from bramble to Brazil nut, from hemp to Hakea, from Sedum to Sequoia, from watercress to wattle.

A small number of trait combinations…

In an article published this week in the journal Nature, the authors found that key aspects of plant form and function (or traits), such as the size of whole plants, their leaves and seeds, and also of the physical and chemical properties of their stem and leaf tissues, tend to combine with each other in surprisingly few common ways. If you imagine the vast diversity of vascular plants on Earth as occupying a volume in six dimensions (one dimension per plant trait considered), this volume looks surprisingly small and flat as compared to the range of possibilities that would exist if traits varied independently – in the same way as the Milky Way galaxy is not a shapeless cloud (a ‘blob’) but instead resembles a disk. Three quarters of the variation of this trait hyperspace is concentrated in a two-dimensional ‘global spectrum of plant form and function’. One major dimension within this plane reflects the size of whole plants and their parts; the other represents the construction costs and quality of photosynthetic leaf area, running from cheap, fragile, high-productivity leaves to ‘conservative’ leaves that are expensive to construct, physically robust and are more resistant to drought or herbivory.

Undoubtedly, some missing trait combinations would be physically unviable, for example an extremely large seed could not be borne by a diminutive plant. But some perfectly viable combinations, from the biophysical point of view, are rare or absent; and others are extremely common, even among species with very different ancestry. This results in a highly uneven occupation of the spectrum by species. Some ‘hot’ areas are crowded by species that converge in their trait combinations, and other ‘cold’ areas are rather sparse. “The plants that now live on Earth are the today’s winners. If one did the same exercise with the plants that lived in the distant past, it would have looked pretty different.  It will be fascinating to ask how ecological filtering and evolution will further shape the Earth’s plant trait-space, particularly in the face of fast and large-scale changes in land-use and climate” says Sandra Díaz, from CONICET at Universidad Nacional de Córdoba, Argentina.

The search for simple, recurrent patterns of plant specialization underpinning the vast diversity of vascular plants on Earth has been an active research area throughout the 20th century. “However, it is only now that we can test these ideas at the level of the whole plant and at the global scale” says Jens Kattge, the coordinator of the international plant trait initiative that made the dataset possible. “With emerging global cooperative efforts, such as the TRY data base, it has become a reality”.

The authors of the study observe

Hans Cornelissen from Amsterdam Vrije University says: “What I find exciting about this global plant trait spectrum is that we can now see how any particular species compares functionally with the rest of the plant world. I find it striking that elderberry, a very common shrub, is right at the heart of the galactic trait plane, while the geneticists’ pet species, Arabidopsis thaliana, is on the fringe of the spectrum, very far from being representative of the world’s flora.”

Hervé Jactel from INRA: “It is also remarkable to observe that the covariations between traits make it possible to clearly differentiate woody plants from herbaceous plants, even though they can occupy the same environments. Trees are not only taller with bigger leaves and seeds but also have stems and leaves of greater density. This confirms that living organisms have diverse solutions to resolve the same adaptation problem”.

Macquarie University (Australia) researcher Ian Wright adds, “An important application of the global spectrum of plant form and function will be to help us understand ecological aspects of plant evolution from the deep past to the present and into the future. It will also enable a more realistic representation of plant diversity in ‘next-generation’ global vegetation models used to investigate the effects of changing climate and land-use on the world’s ecosystems”.

Sandra Lavorel from CNRS, Grenoble (France) comments “because plant form and function critically influence vegetation effects on carbon sequestration or soil fertility dynamics, these findings may have profound implications for ecosystem functioning, now and in the future”.

Biodiversity of leavens for high-quality breads

The diversity of baking practices, the biodiversity associated with the bakery sector (terroir, soft wheat varieties, the micro-organisms in leavens) and impacts on the nutritional and sensory quality of bread are all aspects that were studied by the Bakery participatory research project. You can find out about it in the images shown here.

Guy Richard heads up INRAE’s Directorate for Expertise, Foresight and Advanced Studies (DEPE), which he previously managed for two years at INRA prior to the merger. Before that, he was Head of the Environment and Agronomy scientific division at INRA for eight years. This agronomist’s favourite subject? “Anticipating agriculture”. His method? Team leadership based on strategy and hands-on work.