The agro-ecological transition and the improvement of the sustainability of the systems require a reinforcement of the food autonomy in the farms. More autonomy means lower production costs, and farms that are less sensitive to economic and climatic hazards. "The Autelo project has brought together different partners in two dairy sheep basins, the Roquefort area and the Atlantic Pyrenees, around the issue of food autonomy on farms and the strategies to be found to achieve it", explains Vincent Thénard, INRAE engineer.

In these areas of cheese production with a strong identity, food autonomy is also an asset in terms of image and a lighter ecological footprint, which makes it possible to better meet consumers' expectations. While everyone agrees on the importance of gaining autonomy, this must be done in accordance with the farmers' ability to transform their system, but also by considering local realities: "This is what we have tried to understand by using the concept of sociotechnical system", says Vincent Thénard.  Because even for an identical production, that of sheep's milk, the conception of food autonomy and the means to improve it are different, depending on the territory. 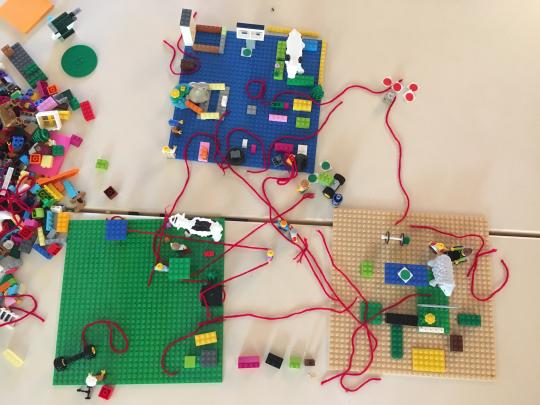 To gain autonomy, a strong and common axis emerges: develop and valorize the forage resources of the farm. In order to better understand the socio-technical organization of these production basins, the interactions and therefore to propose appropriate measures, several workshop activities were proposed to the farmers and the technicians who accompany them. In particular, a serious game with LEGO®, as a support for co-design. "We use the famous colored bricks to build an autonomous system, first on our own, then in groups", "strands of wool represent the different interactions", says Vincent Thénard.

The differences in context, both in terms of climate and farm organization, lead the farmers to consider different approaches. The levers are more at the farm level in the Roquefort area and at the territorial level in the Atlantic Pyrenees. In the Ossau Iraty PDO zone, the zootechnical system is based on territorial and social complementarity. If the optimization of grazing and the increase of multi-species meadows are envisaged, the small size of the farms and the difficult operating conditions force the purchase of fodder, alfalfa in Spain for example, and of food. In order to reduce these purchases, the breeders have considered developing exchange networks with cereal farmers in the neighbouring plains. In the same way, they are thinking of strengthening the pooling of employees and equipment, such as a collective fodder dryer. In the Roquefort basin, also the better valorisation of pasture is the first track envisaged.

There is also the question of the adequacy of the milking period in relation to the growth of the grass, in particular the problems of summer drought. As it is possible in their pedoclimatic context, the breeders could increase the crops, protein crops and alfalfa. They also believe it is necessary to strengthen the links between them, to better defend the price of milk and the viability of their farms. One of the conclusions of this work is that autonomy is not only technical. Antoine Doré, an INRAE sociologist, confirms this: "For farmers, feeling autonomous means above all being able to make decisions and control their system". So is autonomy in breeding a way to transition? Yes, and it must be built with the actors and according to the territory.

PRESS RELEASE - Over a thousand experts from a hundred countries meeting in Montpellier, France, for the 4th World Congress on Agroforestry called for a ‘transformative change’ to tackle the disastrous impacts on our planet of the global food system*. Agroforestry, they agreed, was crucial to that effort. The event was organized by CIRAD and INRA, in partnership with World Agroforestry (ICRAF), Agropolis International and Montpellier University of Excellence.