As early as February 2018, the World Health Organisation (WHO) coined the term "Disease X" to describe a hypothetical future disease that would trigger a pandemic and become a global threat to human health. Disease X would be caused by a virus originating in animals, which would spill over to humans in a part of the world where economic development was driving increased contact between people and wildlife. This virus would spread thanks to networks of human trade and travel, eventually producing epidemics worldwide and upending entire societies. Two years later, this hypothetical situation has become reality. COVID-19 shares many of the characteristics ascribed to Disease X. For researchers who study the relationship between human health and global environmental change, the occurrence of a pandemic of this type was easily foreseeable, especially given the damage that anthropogenic activities have caused to natural ecosystems and biodiversity over the past several decades.

Biodiversity: a rich reservoir of microbes

Even though the number of people suffering from infectious diseases is in decline, especially in Western countries, the number of infectious disease epidemics is growing. Nearly 75% of new or emerging diseases are zoonoses(1), which means that they are caused by pathogens originating in animals. This flow of infectious agents began when our ancestors settled down during the Neolithic—when humans built the first villages, began farming, and started raising livestock. Starting at that moment, pathogens that were naturally present in soils jumped directly to early farmers (causing diseases such as tetanus, tuberculosis, or leprosy, for example). Commensal animals such as rats, mice, and bats moved into human habitations and nearby buildings, bringing with them other unwanted guests, such as the bacterium that causes plague. Because livestock (the domesticated relatives of wild species) occurred at higher densities and in closer proximity to farmers, microbes more easily jumped to sedentary human populations.

From a human health perspective, although we have greatly benefited from the discovery of antibiotics and the development of vaccines for a variety of these diseases, we still face very real threats from the as-yet-unidentified microbes that are a key component of biodiversity and that are found in soil, water, wildlife, and plant roots. On January 1, 2020, there were 7.7 billion people on the planet. We are also living at a time when new infectious agents are emerging and spreading ever more rapidly. Among them are the two viruses that cause AIDS, HIV-1 and HIV-2, for which there are still no vaccines. They spilled over from the chimpanzee and the sooty mangabey, respectively. The agent that caused the 1918 influenza pandemic was the result of recombination between a bird virus and a swine virus. The virus currently responsible for the COVID-19 pandemic, SARS-Cov2, appears to have a similar origin: it likely resulted from the recombination of viruses from two different animal species, one of them hunted or traded illegally. Jean-François Guégan underscores that "biodiversity is not to blame." Guégan is a researcher who works for both INRAE and the French National Research Institute for Sustainable Development (IRD); he studies the transmission of infectious diseases. "Biodiversity permits the existence of a wide range of microbes. Most provide benefits to hosts and ecosystems. It is because of anthropogenic activities and practices that humans are coming in more frequent contact with natural reservoirs of microbes, of which some are potential pathogens deadly to humans."

Over the last 50 years, we have witnessed the emergence of 180 human pathogens, including the HIV, Ebola, and Chikungunya viruses, among others. These infectious agents represent a hidden facet of biodiversity. However, within this very large invisible pool, only a tiny percentage of microbes present a danger to humans, animals, and plants. Indeed, scientists estimate that there are between 360,000 and 460,000 undescribed viruses in mammals. Although the richness of this "dark biodiversity” can seem frightening, the microbes contained therein play crucial roles in maintaining ecosystem balance. “This invisible realm regulates life on Earth,” explains Guégan. In contrast, ecosystem balance is increasingly threatened by anthropogenic activities.

When anthropogenic activities interfere with normal ecosystem functioning, it paves the way for microbes to spill over into humans. These microbes infect the first people with whom they come into contact—most commonly hunters, crop farmers, or livestock farmers—who then introduce the pathogens into the population at large. Deforestation, the consumption of meat from wild animals, and the uncontrolled expansion of cities—all these factors are significantly disrupting the natural cycles of microbes, especially within tropical regions. Along the peripheries of large urban centres, trade activities promote the emergence of microbial pathogens that have rarely or never come in contact with humans before. Guégan clarifies, "These microbes are not naturally human pathogens. They become human pathogens because we offer them that opportunity." 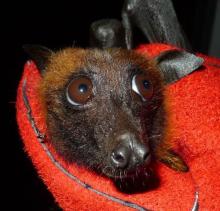 Photo on the left: Forest cleared in Cacao, French Guiana for a banana and orange plantation. Interfaces between ecosystems, humans, and animals (also known as human-generated ecotones) exist between the edges of primary forests and croplands. They are zones in which the risk of pathogen emergence is higher. Credit: Jean-François Guégan (INRAE, Joint Research Unit for Animal Health, Territories, Risks, and Ecosystems).

Photo on the right: Captured bat belonging to the genus Pteropus. Pteropid bats have been identified as the reservoir hosts for Nipah virus in Southeast Asia. However, this taxon is not any more likely than other animal groups to harbour human pathogens. Credit: Julien Cappelle (CIRAD, Joint Research Unit for Animal Health, Territories, Risks, and Ecosystems). 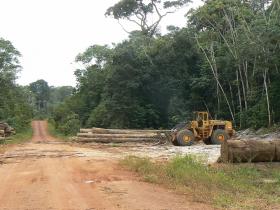 Photo on the left: Pigs in a pen on a family farm in Southeast Asia. The tarp covering the pen protects the pigs from bat feces and urine, which contain Nipah virus. However, bat urine can still run onto the ground, exposing the pigs to the virus. Credit: Julien Cappelle (CIRAD, Joint Research Unit for Animal Health, Territories, Risks, and Ecosystems).

Photo on the right: Logging road in French Guiana. When people fell tropical forests, they are exposed to new infectious microbes because of increased contact with arthropod vectors and reservoir hosts. Credit: Benoît de Thoisy (Pasteur Institute of French Guiana).

Adopting a new social, political, and environmental model at the global scale

More than half of the world's population lives in cities, and 46% of the people on Earth are found in East and Southeast Asia. Increasingly, we are having to deal with the invisible microbial realm that exists along the margins of human-inhabited spaces and that harbours a vast array of unidentified pathogens. In this context, it is crucial to recognise the stark inequalities in epidemiological risk. In developing countries, the poorest individuals within populations are concentrated along the edges of cities. They are thus more frequently in direct contact with fauna potentially carrying dangerous microbes, and they are the most vulnerable to infections. For example, to develop symptoms of cholera, a well-nourished person would need to have a bacterial load that was 1,000 to 10,000 times greater than that of an undernourished person. Furthermore, if many emerging diseases first appear in urban regions in Southeast Asia, it is likely because many of the above risk factors are present in such areas. Globalisation adds to this volatile situation, by spreading the diseases worldwide at an unprecedented speed.

Researchers agree that we must use a global perspective to better counter future epidemics and pandemics. We need a deeper understanding of biodiversity to better protect it. We must also rethink current development policies and aid programmes. These paths are just two among the many that we must explore to prepare for new pandemics. The emergence of COVID-19 has already had major consequences for biodiversity. Organisers have indefinitely postponed the 15th Meeting of the Conference of the Parties to the Convention on Biological Diversity (CBD COP15), which was to be held in China in October. The 2020 United Nations Climate Change Conference (COP26) is also being rescheduled.

(2) Leport C. and Guégan J.-F. (coordinators) (2011).  Maladies Infectieuses Emergentes: Etat de la Situation et Perspectives. A report that is part of a collection of government publications whose aim is to use scientific expertise to inform public policy and debates. It was written with the help of the IRD Communications Department.

All INRAE news on COVID-19

Biodiversity of leavens for high-quality breads

The diversity of baking practices, the biodiversity associated with the bakery sector (terroir, soft wheat varieties, the micro-organisms in leavens) and impacts on the nutritional and sensory quality of bread are all aspects that were studied by the Bakery participatory research project. You can find out about it in the images shown here.

Bruno Fady is Director of Research and Deputy Director of INRAE’s Mediterranean Forest Ecology Unit in Avignon, France. His research focuses on genetic diversity in forest tree populations and the spatial structure of genes which potentially play a role in adapting to climate change.

At the Mountain Ecosystem and Society Laboratory (LESSEM) in Grenoble, Yoan Paillet works hand in hand with forest managers to protect and preserve forest biodiversity. An essential task considering that two thirds of the world’s biodiversity depend on forests for their survival.