In this geopolitically complex region, agricultural imports and food policies constitute a burden on government budgets and are reaching their limits in terms of fighting poverty.  As pointed out by S. Abis (2012)1, this region is a "magnifying glass for global food challenges and [… the] barometer for the competition in which the planet's major agricultural actors are engaged".  INRA's study for Pluriagri2brought together agronomists, economists and political scientists to analyse the different components of the food system in this region and to identify factors which might increase or decrease its food dependence.  The results were presented on 28 October in Paris.

Food dependence that has increased four-fold in 50 years

Within a period of 50 years, the population in the North Africa and Middle East region (NAME) has increased by a factor of 3.5, while dietary habits have become more westernised.  Under these combined effects, the demand for agricultural products has increased six-fold, that for plant products has risen eight-fold for the purposes of animal feeds, and the margin allocated to human foods has risen six-fold.

At the same time, despite marked differences between countries in the region, cereal production (the majority crop) has quadrupled but still cannot meet demand.  Today, NAME is one of the regions of the world most dependent on imported cereal supplies.  As for livestock production, this has increased five-fold in 50 years, according to different trends: although dairy production has remained important, the extensive grazing of small ruminants has diminished while intensive poultry farming has grown.  This region is arid, and little land is cultivable. Although 34% of this land is irrigated, the limits of water availability have been reached.

Dependence on imports has thus risen from 10% to 40% in 50 years, the historical suppliers of Europe and North America having broadened to include other countries such as South America for oilseed and protein crops and the former Soviet countries for cereals.  On the other hand, the region is a net exporter of fruits and vegetables. 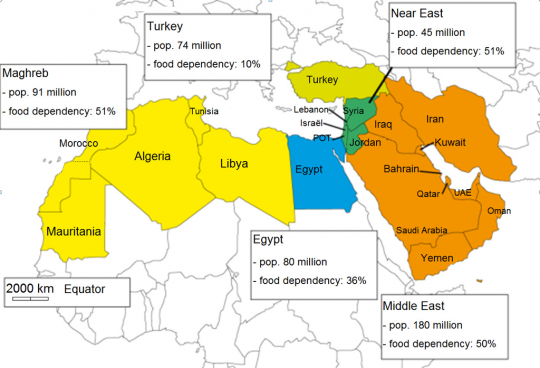 Among the different simulations performed for this study, three could act as levers to limit food dependence in this region through to 2050: technical advances to increase local production, a shift in dietary habits towards a Mediterranean diet and a reduction in losses and waste.  But taken separately, none of these levers will have an effect.  If no measures are implemented to limit climate change, then a significant rise in food dependence can be anticipated: the Maghreb would be particularly exposed, losing 50% of its cultivable land.  Climatic effects would further accentuate stresses regarding water and land use, and those linked to urbanisation and the labour force.  All this would accelerate dependence on imports and could maintain or worsen poverty levels.

Only a combination of the three levers – technical advances, different dietary habits, losses and waste - would be effective, which supposes strong public policies in support of these changes.  However, the simulations demonstrated that the most effective lever would be to limit climate change, which once again supposes a political commitment.

2 Pluriagri is an association of professional commodity producers (Avril, the Confédération des Planteurs de Betteraves (French Confederation of Sugar-Beet Producers) and Unigrains) with support from Crédit Agricole SA, that was set up to carry out foresight studies on markets and public policies.

A study performed by the DEPE

This 18-month study focused on a region and a series of issues which formed part of the broader questions addressed by the ongoing foresight project, AgriMonde-Terra.

It used the joint INRA-CIRAD GlobAgri tool developed for this foresight project, based on an FAO dataset.  This model takes account of land constraints.

The study was organised in two stages:

The working group comprised academic experts and French operators specialised in this region.  The study also formed part of the INRA-CIRAD metaprogramme, Glofoods.

the Directorate for Expertise, Foresight and Advanced Studies (Send email)

Storing 4 per 1000 carbon in soils: the potential in France

On 13 June 2019, INRA delivered a study commissioned by the French Environment and Energy Management Agency (ADEME) and the Ministry of Agriculture concerning the carbon storage potential of soils in France. Using a novel methodology, the study was able to evaluate this potential by estimating the implementation cost, region by region, in terms of a 4 ‰ goal. The 4 per 1000 Initiative for Food Security and Climate was launched during the UN Climate Change Conference held in Paris in 2015.