Members of the "potato team” can be found in Rheu and Ploudaniel, the two sites of the Institute for Genetics, the Environment, and Plant Protection (IGEPP), which is part of the INRAE centre of Brittany-Normandy. Although physically separated, the researchers are united in spirit, and the work atmosphere is warm and cheery in both places. Receiving a collective award suits the team perfectly! The 2019 INRA Science with an Impact Award recognises the team's major contribution to reducing pesticide use, even before the issue became a major societal concern. "It wasn't always easy to be ahead of the curve,” comments Jean-Eric Chauvin, a geneticist, "but we have no regrets."

As geneticists and pathologists all know, it is important to play the long game when improving a plant's genetic resistance to pathogens. Indeed, pathogens—fungi, viruses, bacteria, and nematodes—can adapt to and circumvent resistance mechanisms. For example, the potato team has shown that French populations of blight have adapted to the resistance strategies of the Bintje, the most commonly cultivated potato variety in France. Consequently, to outpace pathogens, the team needs to think strategically. It must utilise combinations of resistance mechanisms and brainstorm about the conditions under which such mechanisms would be the most durable and effective. To this end, the team has put into place extensive research programmes that focus on three major tasks.

The first task is to monitor plant health and safety. Marie-Claire Kerlan, a geneticist, explains: "Any potato carrying a virus is eliminated because planting an infected tuber means that the virus will be spread to the next round of crops." To monitor pathogen population dynamics, ensure plant health, and identify resistant potato varieties, the potato team has drawn on its innovative research to develop kits and analytical tools. This work began in the 1980s, but new improvements are made every day.

The second task is to breed resistant potato varieties, which is a joint effort by geneticists and pathologists. Laura Chauvin, a biologist, states, "Our work on [potato] genetics is cutting edge. Genetics is the best approach."  Most of the resistance genes have come from wild members of the Solanaceae family that are related to the potato. INRAE's Centre for Biological Resources at Ploudaniel (CRB BrACySol) harbours more than 900 specimens, which are used to create improved breeding lines. The goal is to generate new pathogen-resistant stock each year for private plant breeders in France*, who help fund the team's research. Cultivated varieties are enhanced using a traditional approach: individuals with the most promising traits are crossed, and their offspring undergo selection. Some of the experimental research involved is conducted in the field. Before the plants are bred, molecular and cell biology techniques are used to describe key genes and examine their functions. Researchers then confirm the presence of these genes in varieties displaying traits of interest. For example, a unique virus resistance mechanism was first discovered in a pepper species by scientists at INRAE Avignon; the mechanism's utility was then explored in the potato. In another case, the team developed nematode-resistant breeding lines. These lines all carry a gene whose effect is to change the sex ratio of the roundworms. If there are no females, there is no one to produce eggs! The team also identified a second gene that operates in tandem with the first gene to prevent nematodes from entering potato plants. “Many other research groups in Europe are envious of what we have been able to do," remarks Kerlan, "We are now trying to see if these mechanisms can help stop outbreaks of virulent nematodes, such as those seen in Germany in 2014." To study how nematode populations adapt in the face of plant resistance, nematologists carried out experiments in secure facilities where non-virulent nematodes were allowed to interact with resistant plants over several generations. After eight generations (i.e., eight years), the researchers identified and characterised the nematodes that had managed to overcome plant resistance. Such work is essential in the quest to discover more effective and longer lasting resistance mechanisms in plants.

The third task is to ensure the long-term effectiveness of the chosen resistance mechanisms. “Twenty years ago, we thought that breeding resistant varieties would spell the end of chemical pesticides. We now know that, on its own, plant resistance isn't enough," explains nematologist Sylvain Fournet. For pathologist and epidemiologist Didier Andrivon, the team's work on plant architecture was a major step forward: more air flow through the plant cover layer reduces humidity levels and thus the risk of leaf infections. “By changing plant architecture while also applying other methods, moderate levels of disease can be controlled,” comments Claudine Pasco, a pathologist. Nematologist Josselin Montarry adds, "Farmers must utilise a suite of solutions: they need to select an appropriate variety with a suitable form of resistance, change plant cover characteristics, increase rotation length, and employ biocontrol products, such as those that our team is currently developing. Within this toolkit, variety resistance plays a key role, as was underscored in the recent joint scientific report 'Can organic farming give up copper as a crop protection product?’”

If we want farmers to adopt these solutions, we must provide support as they change their practices. Public policies can encourage the shift. To promote advances in the technical regulations associated with variety registration in the French catalogue, Andrivon and other experts helped define the "environmental value” of plant varieties, a metric that expresses a variety's level of resistance to both blight and nematodes. “This new score has significantly influenced the perspectives of plant breeders, who now pay much more attention to this criterion,” he asserts. He continues, "Fourteen resistant [potato] varieties, all produced using INRAE breeding lines, have been registered in France, which puts us far ahead of other countries."

The key to success

What is behind the potato team's success? Its interdisciplinarity has undoubtedly played a role, as well as its willingness to join and shape international networks, both within Europe and farther afield. The team confirms this idea: "We wouldn't have accomplished what we have otherwise." Access to quality research infrastructure has also had a positive effect. The team can exploit a collection of over 12,000 genetic resources, which CRB BrACySol maintains in greenhouses, in platforms, in vitro, or via cryoconservation. It can perform experiments at a field station with 82 hectares of land and secure facilities for working with quarantine organisms. The team's strong ties to the industry are also essential because they translate into reliable funding as well as support for public policies.
Whenever the potato team gets together, there are energetic discussions about the next task at hand: how to achieve the right balance between different yet interdependent control mechanisms in order to most effectively protect potatoes against their plethora of pathogens. In the meantime, the team's members will celebrate their award as they head into 2020, which the UN has proclaimed the International Year of Plant Health.

The potato team is helping to develop biocontrol products for dealing with different pathogens (e.g., blight and nematodes) that utilise natural compounds. It is also exploring how the soil microbiota (the entire community of soil bacteria and fungi) influences the effectiveness of such biocontrol products. When used alongside resistant plant varieties, these new products should allow the efficacious and sustainable management of pathogen populations.

Enhancing plant resistance, modifying the structure and architecture of plants and plant cover, boosting plant defenses, and deploying biocontrol strategies..."The ultimate objective is for these different tools to operate simultaneously and synergistically, so that farmers can effectively manage outbreaks without constantly resorting to chemical pesticides," explains Andrivon. For this approach to be successful, agricultural practices will need to change, as will consumer expectations regarding the physical appearance of potatoes. Farmers must also shift their interpretation of risk and learn to tolerate a low level of pathogen presence that ultimately does not impact yields or earnings.

*Members of ACVNPT (Association for the Creators of New Potato Varieties)

When the chips are down, they are rooting for the potato

The potato is the fourth most important crop in the world, behind wheat, rice, and maize. Bolstering potato farming in Africa and Asia could help promote food security. However, for the potato to maintain its status, it is crucial to control the plant’s plethora of pathogens without resorting to chemical pesticides, which have ecotoxicological effects. 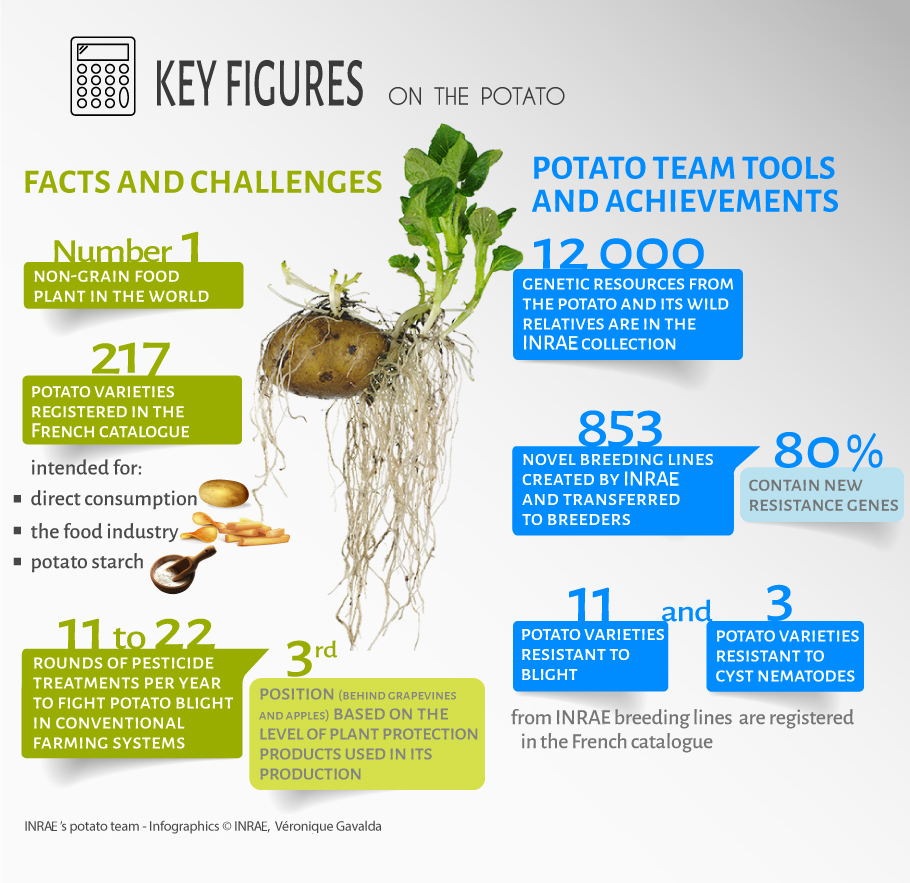 One of the potato team's founders, Bernard Jouan, likes to remind people of the potato's historical significance: thanks to Antoine-Augustin Parmentier, the plant spread throughout Europe in the late 18th century, helping bring an end to famine on the continent. The potato is much loved the world over and features prominently in both holiday feasts and everyday meals. Unfortunately, many other species also have a penchant for the potato, including a variety of viruses, the Colorado potato beetle, and the potato cyst nematode, a microscopic soil roundworm whose root cysts can last 10 years, making them ticking time bombs. There are also numerous bacterial species that cause problems for potato storage and that negatively affect potato appearance. However, the potato's number-one enemy remains the water mold responsible for potato blight. To keep potato blight under control, potato crops are treated 12–22 times per year with fungicides. When this pathogen arrived in Europe in 1845, it took out susceptible varieties within the space of just two years. One of the consequences was Ireland's Great Famine, which resulted in mass emigration to the United States. 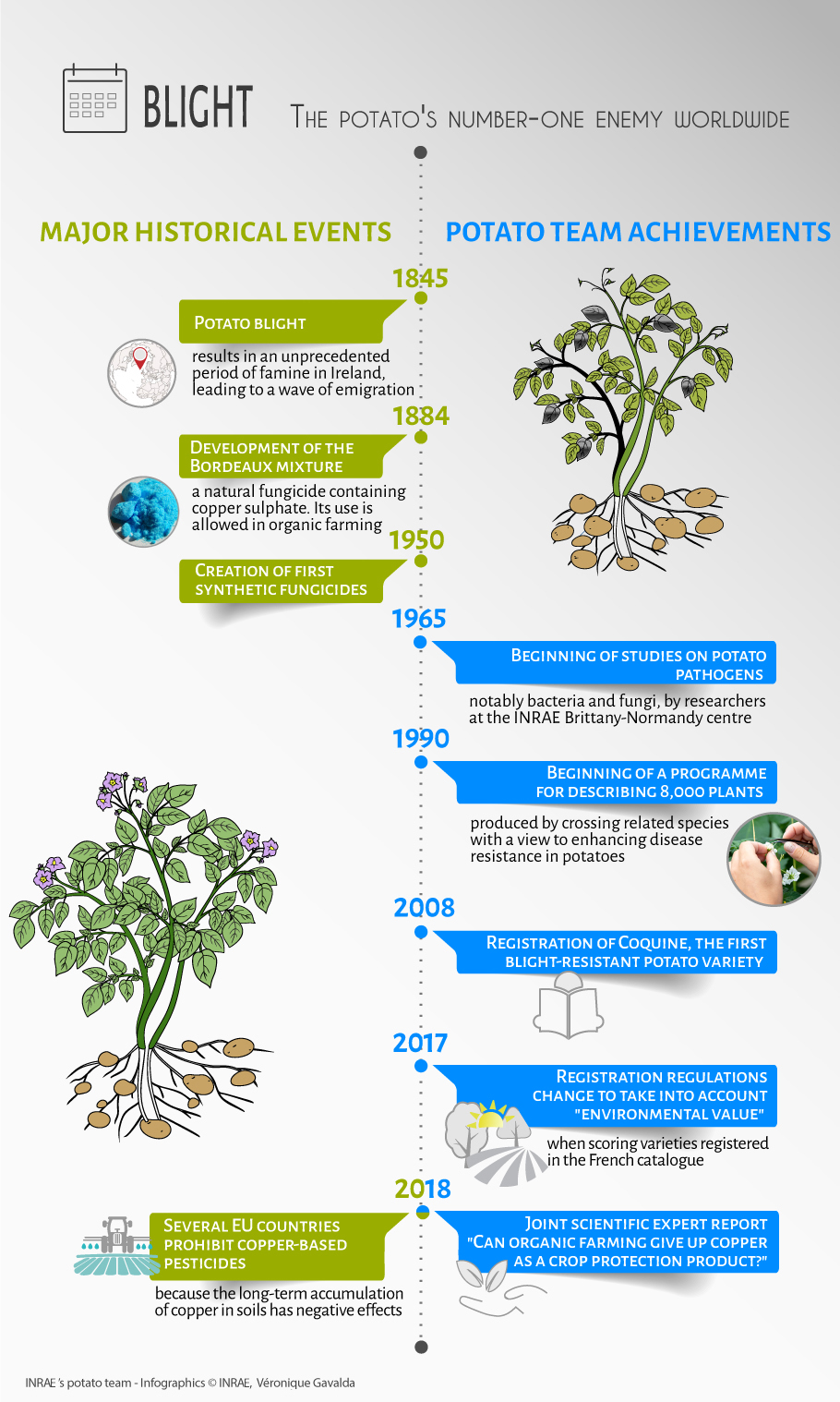 At present, France’s potato plants are in an excellent state of health, all thanks to the 1.5 million immunochemical assays performed annually to eliminate individuals that are infected with viral or bacterial pathogens. These testing procedures arose from the innovative research carried out by the potato team in the 1980s. The team subsequently used genetics to create resistant potatoes, a winning approach for more sustainably controlling potato blight and cyst nematodes. The team’s detailed understanding of the mechanisms underlying pathogen virulence, adaptation, and evolution is directly responsible for its research successes. 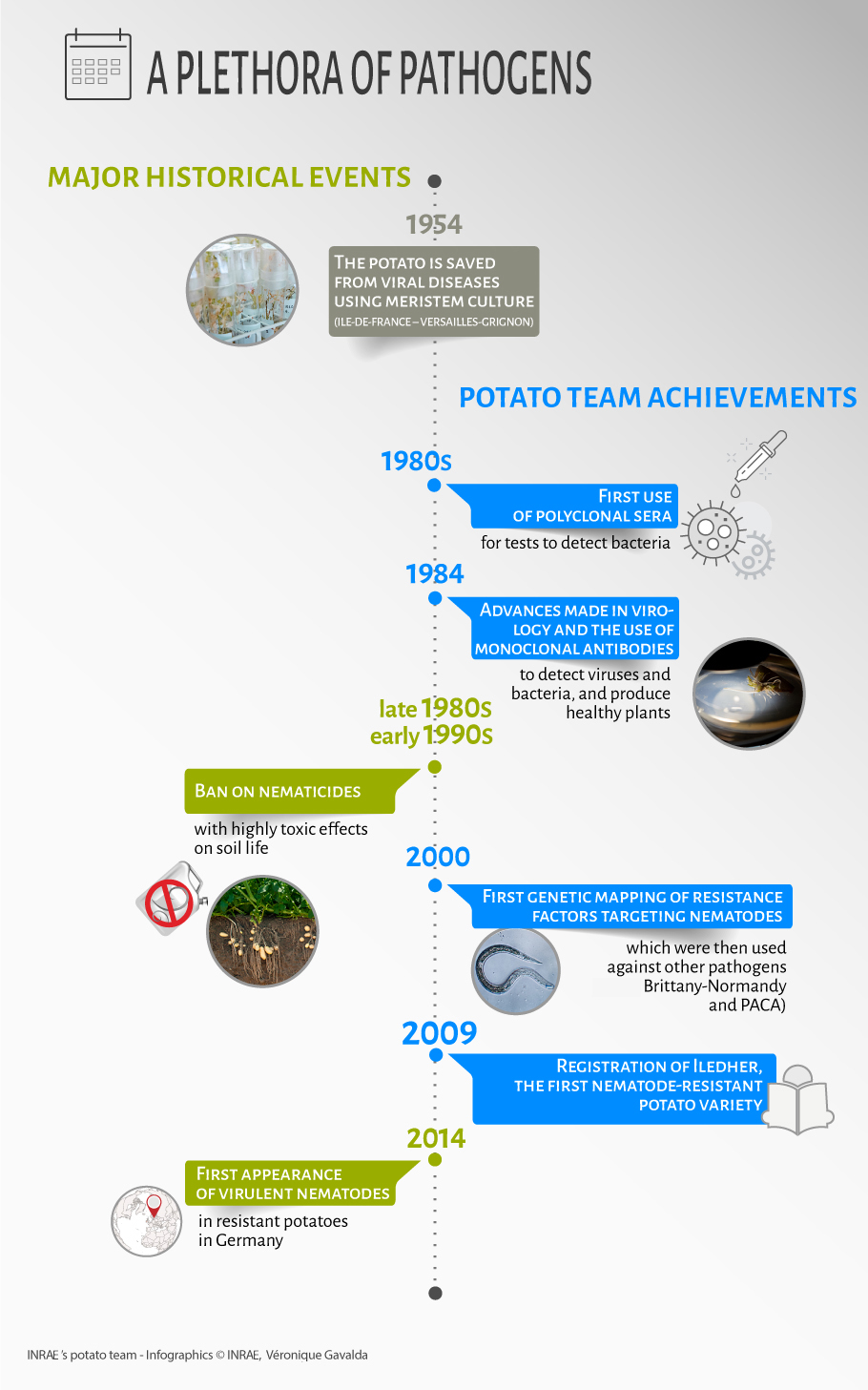 Claudio Carvajal has no time to lose

The stability and security of dams are crucial. Whenever there is a problem, research engineer Claudio Carvajal must visit the site and provide immediate support, both short- and long-term, to prevent dangerous situations.