In 1993, enamoured with the life sciences but not sure which road to follow, David Makowski joined the French Institute of Agriculture Paris-Grignon, which later became AgroParisTech. Many classes and many encounters with like-minded people later, he became interested in statistics and data analysis. Since then, the passion has never left him, and David has gone far over the years.

Data analysis, a research topic in its own right

With an agricultural engineering degree under his belt, freshly hired by INRA as an assistant researcher, David left for the Netherlands where he penned his first scientific articles at the University of Wageningen. For a year and a half, he worked on optimising large-scale agricultural output with the help of mathematical models, all the while broadening his skill set by combining mathematics with agricultural sciences. This professional experience only served to confirm his interest in data analysis.

When he returned to France, David joined INRA at its Occitanie-Toulouse centre. There, the budding researcher prepared his doctoral thesis on models and statistical methods for optimising doses of nitrogen fertilisers for common wheat.

Climbing the INRA ladder of success, David became research scientist, then research director. Between 2015 and 2018, he was director of the Joint Research Unit for Agronomy (INRA, AgroParisTech) and then joined the CLAND Convergence Institute which is part of the Université Paris-Saclay.

The first step on the road to success

When he talks about data analysis, David focuses on the approach he uses, which follows a three-step logic: define objectives and hypotheses, use available data transparently, and analyse uncertainties in findings. He also evokes the many statistical methods that his work involves, notably meta-analysis which allows scientists to synthesise accumulated knowledge about strategic topics linked to agricultural output and its impact on the environment and health.

When talking about his work, David takes pains to call attention to the many scientific articles he has contributed to that give visibility to his work or that of his collaborators and partners. Or, he focuses on the expertise he provides for the French Agency for Food, Environmental and Occupational Health & Safety (Anses) or the European Food Safety Authority (EFSA), and on his role in training engineers, doctoral candidates and young researchers in France and abroad, or his contributions to technical institutes.

Only one step separates experimental results and a full-fledged database, a parcel of land and a global scale… or almost. Indeed, nowadays, many agricultural challenges are approached from a global perspective: agricultural output and how climate change affect it, the consequences of cutting back on or increasing inputs, and greenhouse gas emissions, to name but a few.

For David, it was only natural to take on such a perspective, conscious as he is of the challenges the world is up against, whether related to adapting agricultural models, organising collectively to pool results from several institutes, or sharing knowledge, concepts and methods between disciplines.

Recently, David joined the Climate Change and Land Use (CLAND) Convergence Institute which was set up in 2017 as part of the French Investments for the Future programme bringing together 12 research units of seven institutions including INRAE and two universities. It aims at evaluating the agricultural, economic and environmental risks linked to land use and identifying solutions for the integrated management of ecosystems and agriculture faced with climate and environmental change. David's skills in data analysis are valuable, particularly to assess the impact of extreme climate events on agricultural production and to analyse the environmental risks associated to different cropping systems, in collaboration with economists, statisticians and climatologists.

2001 - Silver medal from the French Academy of Agriculture 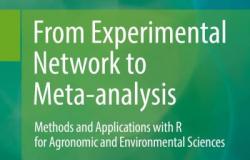 Find out more From Experimental Network to Meta-analysis

From vine to wineglass: helping every actor adapt to the effects of climate change

Higher temperatures and increasingly scarce water resources will modify the way vines function and the composition of their grapes, with subsequent effects on every stage of the winemaking process and in the creation of a balanced final product. So how do you prepare a whole industry, from producer to consumer, for the consequences of global warming? The LACCAVE project has responded with a multidisciplinary approach to adaptation issues.