An essential guide for farmers...

Feed tables contain data on the nutritional value of food and the nutritional needs of animals. These publications are popular among professionals and instructors. The initial versions, published in 1978 and 1988, were updated in 2004 for ruminants, pigs, poultry, rabbits, horses and fish, and again in 2010 and 2018 for ruminants. A multi-species version is available in English, French, Spanish and Chinese.

...that is constantly changing

The 1978 tables (1) are based on the very first French reference tables published in the 1940s (2). Among the new features of the 1978 tables was the use of appropriate units for the comparison of energy content and protein nutritional values of different foods (3). They also looked at animals’ ingestion capacity and the ingestibility of foods (4).

These theoretical tables later incorporated practical tools: two programs, INRAtion®V5 (to calculate and analyse rations for cattle, sheep and goats, released in 2018) and PrevAlim (to predict food values and allow farmers to use their own foods in the software, released in 2008). INRAtion is available in three languages in a dozen countries and has helped make INRAE systems famous. In France, it is included in dairy analysis tools and other livestock management programmes. It is also widely used in agricultural learning establishments.

(1) These 1978 tables were produced by the Zootechnic and veterinary research centre in Theix, under the direction of Robert Jarrige.
(2) By Professor André M. Leroy at the National Agronomic Institute.
(3) Energy and nutritional values take into account the actual amount of nutrients available after digestion.
(4) Ingestibility is calculated based on the time it takes for the food to be chewed, and digested in the rumen. 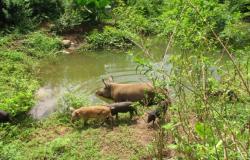 Feedipedia is an open access information system on animal feed resources that provides information on the chemical composition, nutritional value and safe use of livestock feeds available around the world.

Japan: a new mobility programme focused on emerging scientific topics, and a new LIA on fruit biology in the context of climate change

PRESS RELEASE - During the visit by the French President to Japan on 26 and 27 June 2019, and in the presence of Frédérique Vidal, Minister for Higher Education, Research and Innovation, INRA finalised important agreements with two of its Japanese partners; one with the Japanese National Agriculture and Food Research Organization (NARO) and the other with the University of Tsukuba, as well as participating in preparations for the next Franco-Japanese commission on research which is scheduled in France during the last quarter of 2019.

The 3BCAR Carnot Institute is supporting work on the concept of dry biorefining applied to lignocellulosic biomass. Two concepts are under study: the development of a fuel in powder form and the use of electrostatic separation applied to the fractionation/enrichment of biomass.

As part of the Horizon 2020 Framework Programme for Research and Innovation, the European Research Council (ERC) has awarded grants to more than 400 young researchers to conduct their research projects. ERC Starting Grants are intended to enable these young scientists to put together their own teams to carry out ambitious and novel research. Stella Césari, a researcher at the Joint Research Unit for Biology and Genetics of Plant-Pathogen Interactions (BGPI) at INRA’s Occitanie-Montpellier centre, will receive a Starting Grant for her ii-MAX project.