Interview by Anne-Claire Jolivet, from the Exploreur team.

Why should the traditional Pyrenean breeds be conserved? Are they under threat?

Andrés Legarra: "The sheep sector in the mountains must be more resourceful to prevent economic constraints from forcing farmers to abandon their traditional breeds for more productive and intensive breeds. The majority of them prefer to maintain the meadows, graze and organize transhumance. Of course, there are places where they have no choice, like in some regions of central Spain where they accumulate difficulties: drought, milk prices and unavailability of pastures. But, I think that in general, farmers prefer extensive farming, if the economy allows it. In the Basque country, where I come from, sheep are everywhere. Even on a dairy farm, there are always about 20 ewes left that the grandfather takes care of!"

AL: "The idea of a country breed is quite flexible, it is a set of physical characteristics that are culturally accepted... to see it clearly, you may have to have soaked in the environment a bit like Obelix in the pot! The Manech ewe is French, has white wool, black or red head and legs. The Manech Tête Noire have horns. Largely identical, the Spanish Latxa has slight morphological and color differences. The wool is always rustic (besides Latxa etymologically means "rough"). The blacks are historically more the classic sheep of the transhumance and the reds more those of the hills. There are black and red sheep on both sides of the border. Breeders of both nationalities have always exchanged their animals, despite the logistical difficulties and sanitary constraints inherent in moving the animals. These two breeds are very similar. For genetic improvement, by doing it together, it is possible to do better, and thus avoid that they become small sensitive breeds." 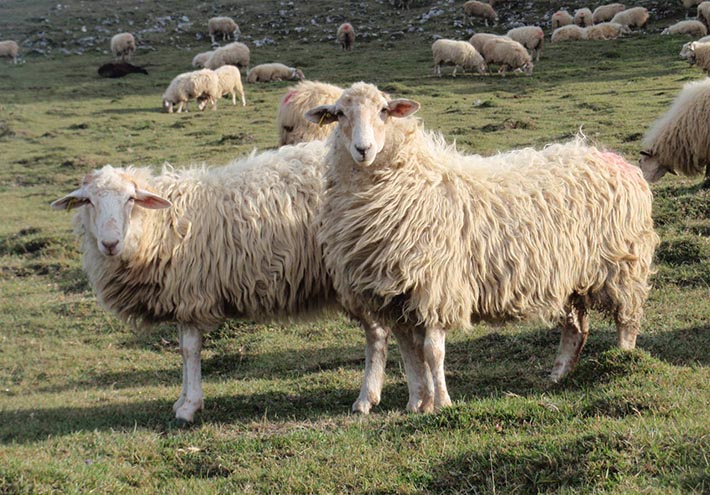 How does the ARDI project help to maintain an extensive breeding, more interesting from a cultural and environmental point of view?

AL: "The common objective is to have balanced and therefore profitable ewes. Improvement as we practice it consists of choosing the best rams in a collective manner and distributing their semen carrying the genes. It is essential to maintain an operational collective dynamic, because from a purely genetic point of view, and without mentioning the cultural aspect here, a breed maintained by a few breeders, let's say about fifty, reduces its capacities over time. Statistically, there are less possibilities to obtain individuals performing well on different characteristics with few herds. Also a small breed is more sensitive to abandonment by a number of breeders.

The originality of this project for Basque ewes, but also for Bearnais, is to develop two very important aspects for the sector: both it is necessary to optimize the choice of ram seeds but also to improve the organization of the diffusion of these seeds across borders, so as to share the genetic resources. Is it wise to gain a genetic benefit of 0.01% if it causes too many logistical constraints and breeders cannot travel to collect the seeds and inseminate the corresponding ewes?"

What is a balanced sheep?

AL: "For the Latxa and Manech breeds, genetic improvement helps ensure that they provide good milk, in sufficient quantity and quality, but also that they are healthy and adapted to their environment. They are called hardy, or the new fashionable term: resilient. They must adapt to the environment, resist the climate. In terms of zootechnics, they can graze on a rainy or foggy day without any worries and on uneven ground during transhumance." 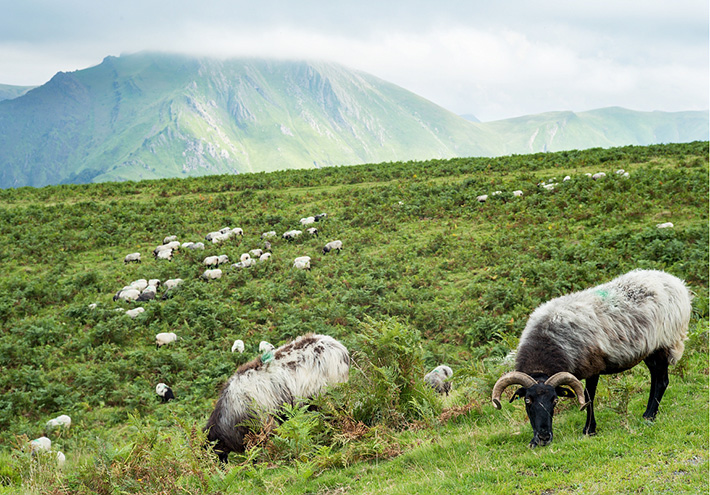 How do genetic scientists and breeders interact? How is the "selection scheme" constructed?

AL: "Genetic improvement in breeding has a long history and has always been a collective affair. Before the development of biotechnologies and artificial insemination, farms exchanged rams that appeared powerful at fairs. Since the 1970s, information has been systematically collected on their production level, but also on their reproductive capacities, their morphological characteristics (especially the shape of their legs and udders), their resistance to infectious and parasitic diseases, etc.

200 to 300 breeders delegate to their cooperative the choice of a batch of ram semen to meet the specific needs of the producers gathered. It's a bit like receiving a basket of vegetables from local producers chosen for the quality of their work, they don't know what's in it but they know it's good and diverse! Each year, the regional center selects the batch that is deemed balanced, based on the previous batch used and the environmental and economic constraints to be overcome. In the past, breeders favored productive animals, today they also look for animals adapted to the environment.

Some regions have gone so far as to merge several traditional breeds to create a new one. In France, the most emblematic selection policy is the one that shaped the Lacaune breed, which is today attributed to the Roquefort AOC. For the Latxa and Manech breeds, the future will tell us what choices breeders will make ... the ARDI project offers them scientific and collaborative tools to reinvent their own selection scheme!"

What is your role in the ARDI project?

AL: "In a flock, renewal of the flock is essential because a ewe only lives a few years, and this renewal is done with better animals - this is called the selection of breeding stock. Genetic improvement takes time because we do not manipulate genes, we choose the best animals among all the animals in the breed. The challenge is to gradually increase the genetic quality of the whole breed through a choice of high performing animals, including rams that produce semen. Today, computer tools, with databases and algorithms for processing and sorting information, make it possible to take into account a large number of animals and a large number of very diverse traits - not to put all the marbles in the same basket. My role is to design mathematical models based on genetics, to improve these algorithms and to take into account new data: information coming from the farms (animal characteristics, parentage) but also DNA samples taken and analyzed by my colleagues from INRAE and Spanish research centers. I am improving the tool to refine the description of the populations and to allow the breeders to make the best choice. This specific work on ewes is also used for mathematical tools that are used for the selection of cows or other livestock."

The ARDI project ends at the end of the year, has it met its objectives?

AL: "We have achieved what we hoped from a research point of view. Another of its successes, in my opinion, is that it is very unifying! It allows the genetic selection actors on both sides of the border to get to know each other better, it forces them to meet and talk to each other. On the linguistic level, it's crazy, we have trilingual meetings to find technical solutions, which leads us to ask new questions... The interest in maintaining the collective is essential. Let's keep in mind that these ewes are not very productive, so the temptation to replace them by more intensive breeds, sometimes in off-ground conditions (in France, the Lacaune and in Spain the Assaf, a breed of Israeli origin) is always to be fought. ARDI has helped maintain the link and the associated motivation!" 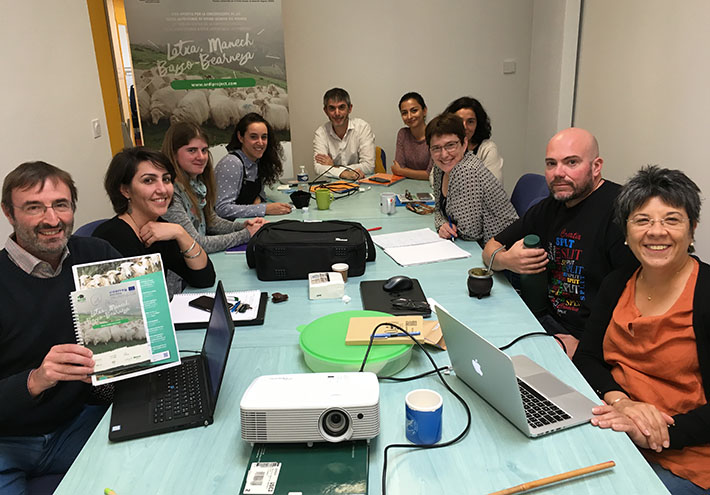 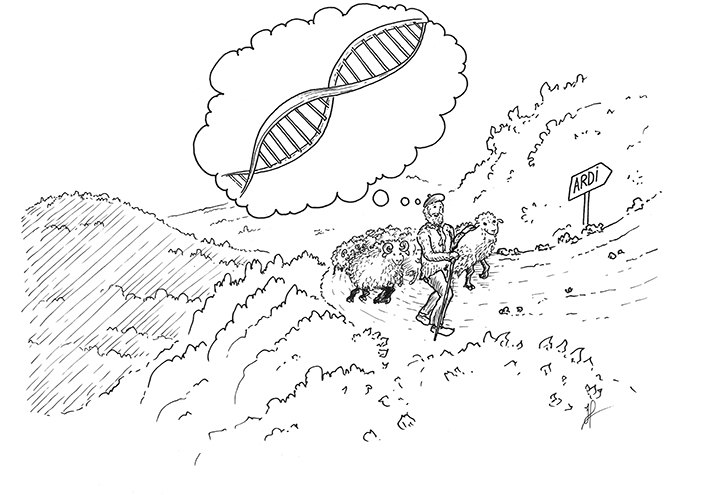 The ARDI project in brief
This cooperation project (2017-2021) covers several departments and regions (Haute Garonne, Pyrénées Atlantiques, Navarra and Euskadi). It is led by NEIKER-Tecnalia and brings together research and development structures: INRAE and IDELE (Institut de l'Élevage), but also cooperatives and breeders' associations: CDEO (Centre Départemental de l'Élevage Ovin), ASLANA (Association of Sheep Breeders of the Latxa Breed of Navarra), and ARDIEKIN (Selection and Artificial Insemination Center of the Latxa Breed of Sheep and the Carranzana Breed). The project has a budget of 1.155.072 € of which 65% is financed by ERDF funds within the framework of the POCTEFA program of cross-border cooperation France-Spain. 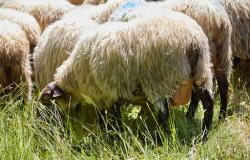 Visit the website dedicated to the ARDI project for more information!

The original version of this article was published on the Exploreur website on May 31, 2021.

H2020 GEroNIMO: thinking about the breeding of tomorrow

Within the framework of the European Horizon 2020 program, the “Genome and Epigenome eNabled breedIng in MOnogastrics” (GEroNIMO) project, involving teams from the Genetics, Physiology and Breeding Systems (GenPhySE) laboratory at the INRAE Occitanie-Toulouse center and the Animal Genetics and Integrative Biology (GABI) laboratory in Jouy-en-Josas, has been awarded 7 million euros over 5 years. This Europe-wide multi-actor project studies ways to improve genetic selection in animal breeding and to conserve genetic and epigenetic diversity, in order to provide new knowledge and perspectives to stakeholders, while taking into account current issues associated with sustainable development.

Clover and sainfoin, a good diet for sheep

If combined with grass to make silage, the tannins in sainfoin and the polyphenol oxidase in red clover preserve plant proteins during the fermentation stage and then in the rumen of sheep. This can improve the zootechnical and environmental performances of ruminant production.

The shift to high-performance agriculture

INRA has carried out a study commissioned by the General Commission for strategy and foresight (CGSP) to examine how agricultural production systems in France can be made more sustainable.