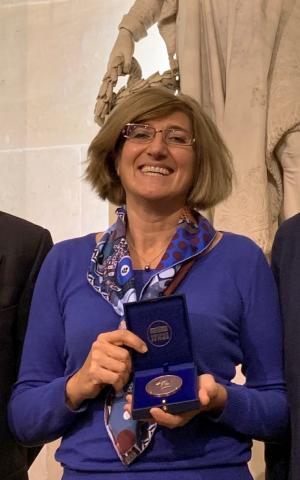 This year’s Grand Prix has gone to Véronique Bellon-Maurel, Head of IRSTEA’s Ecotechnology Division and of #DigitAg, the Digital Agriculture Convergence Lab. With a powerful vision for agriculture involving the use of digital technologies to move towards an agroecological future, Véronique Bellon-Maurel is also skilled in establishing mixed public and private partnerships to deliver impact. Guided by the principle that research should be turned into practice, she positions research collaboration between public and private partners at the heart of innovation and value-creation.

On hearing of her award, she commented: "If this prize hadn’t existed I would have wanted to invent it. Because it brings together science and technology, two approaches, two goals, two visions of the world that are too often treated as separate, or even seen as competing with each other. For all my working life I have called for science to be put to use to help technology. From my earliest research projects I decided that understanding must be a starting-point for action. Last, I am very proud to be the first woman to win this prize. It sends a message to young women that they have a place and a role in technology. And that we are expecting them."

An agricultural engineer (she is a member of the elite IPEF corps), Véronique joined the Montpellier teams at IRSTEA’s predecessor, Cemagref, in 1987. Here, her internationally-recognised research projects enabled, in particular, the development of near-infrared spectrometry (NIRS) for use in agricultural and environmental sensors, bringing advances in smart farming and improved processes. This work led to the creation of two start-ups, Ondalys and Indatech.

From 2008-9 onwards, she extended her research remit beyond the strict acquisition of measurements: having sought to measure the properties of agricultural products she then set out to evaluate their environmental performance. To this end, with Philippe Roux, she created the ELSA laboratory for life-cycle analysis (LCA) in 2008, followed by the ELSA-Pact Industrial Chair in 2013.

Since 2013, as the Head of the Ecotech Division, she has played a key role in a number of projects commissioned by national government. She was closely involved in the production of three reports for the Ministries of Agriculture and Research: The Future of the Agricultural Equipment Sector (Bournigal 2014), Agriculture Innovation 2025 (Bournigal et al, 2015) and the AgGate - Agricultural Data Gateway report (Bournigal, 2016).

In 2017 she launched #DigitAg, the Digital Agriculture Convergence Lab, after spending some 18 months developing a successful bid to become one of the ten national convergence labs funded by the government’s 2016 Investments for the Future offer.  #DigitAg has brought together a consortium of 17 members, including public research and educational institutions, technology transfer agencies, and businesses, whose common goal is to prepare for and support the development of digital agriculture and its associated businesses in France and the global South. Based in Montpellier, with secondary centres in Toulouse and Rennes, and with funding worth 9.9M€, #DigitAg is led by IRSTEA and aspires to become a global reference organisation for smart agriculture.

In September 2019, Véronique won funding from the Territoires d’Innovation investment initiative for an additional partnership project, OccitANum, which involved nine months of intensive partnership-building. OccitANum, (Digital Agroecology in Occitanie) is a LIT (local innovation laboratory), or ‘Living Lab’, set up to mobilise digital tools to accelerate agricultural and ecological transition for businesses, facilitate local food provision, build better links between consumer communities and farmers, encourage the emergence of new Agri-tech economic operators, and to disseminate the open innovation model on which it is founded. OccitANum will adopt this new participatory research and innovation model to bring together digital technologies and actors in the agroecological transition.

Water and soil pollution, resistant pests, dwindling biodiversity… the adverse effects of pesticides on the environment are well-known. But what if we used natural synergies between plants and the micro-organisms that live in soil to ease through the agricultural transition? Mycophyto, a young start-up based in Sophia Antipolis, proposes effective biological alternatives for farming and landscaping. We sat down to talk with Justine Lipuma, co-founder of Mycophyto.

Born of a meeting between know-how in French cheese-making and science and innovation, the start-up Les Nouveaux Affineurs aims to replace dairy-based cheeses with matured plant-based cheeses. Nour Akbaraly tells the story of this start-up, born in 2017.

Can organic farming manage without copper?

On 16 January 2018, INRAE presented the findings of a collective scientific expert report (ESCo) on the levers available to reduce the use of copper to protect organic crops. This expert report had been commissioned by the French Institute for Organic Farming (ITAB) and an INRAE federative research programme (the SMaCH metaprogramme). The approach of the ESCo involved an examination of the literature, and the results obtained could potentially be applied to other types of agriculture seeking to limit or eliminate the consumption of certain inputs.