The Asian hornet is a dangerous honeybee predator. Since its arrival in France in 2004, its invasion front has extended gradually to Spain, Italy, the United Kingdom, Belgium and Luxembourg. Possible factors that might restrict its spread are an absence of the water these insects require to build their nests, and altitude. Food resources are not limiting, because as well as predating insects, hornets can feed their offspring using other protein sources (meat or fish from market stalls, fishery waste, livestock carcasses). The only credible possibility to control this invasive pest is to limit its populations, and two techniques can be used at present: the relatively ineffective setting of bait traps for reproductive insects, the new queens that will found new colonies, and the other much more effective method of destroying the nests as early as possible.

INRA scientists and their British colleagues, specialists in using radio-telemetry in insects, have developed an original technique that involves equipping Asiatic hornets with radio tags so that they can be tracked back to their nests. 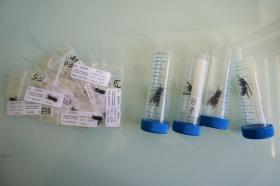 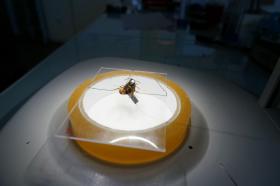 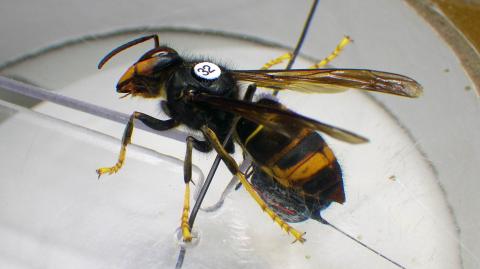 The INRA scientists captured “worker-killer” hornets foraging near beehives. They then equipped them with a radio tag which was suspended ventrally, tied with a cotton thread. After lengthy tests, the scientists selected workers weighing 0.35 g to carry a 0.28 g tag offering a range of 800 m. Indeed, they had previously observed that 80% of these worker insects could carry up to 80% of their body weight.

The tagged workers were trained to fly in a flight cage before they were released and the scientists could follow them at distance to their nest. It was thus possible to detect nests up to 1.33 km from the departure point of the worker.

This is therefore the first technique that can locate nests before the autumn and enable their early destruction. It may thus be possible to equip reproductives with tags in the spring when they establish their first nests and emerge during the day to find food for their daughters.

The INRA scientists are also conducting other studies on control of the Asian hornet. They have notably characterised strains of entomopathogenic fungi (Beauveria, Metharizium) that can infect and kill the hornets. This option could supplement the detection of nests into which these biocontrol agents, which are not environmentally harmful, could be injected.