The misty days of autumn...the grape harvest is upon us, as are INRAE’s annual research awards. In Colmar and Bordeaux, members of the "grapevine resistance” team are getting a bit misty-eyed themselves over their recently acquired laurels. Theirs is the story of scientists who are harvesting the fruit of long-term research on disease-resistant grapes.

Downy mildew (Plasmopara viticola) and powdery mildew (Erysiphe necator) are serious plant diseases. In the 20th century, they were largely fought using pesticides and, to a lesser degree, genetic improvements. In the early 21st century, INRAE launched an ambitious grapevine breeding programme: INRAE-ResDur. The current challenge is to develop new varieties with high-quality berries that are also resistant to both mildews. It is necessary to produce excellent wines while simultaneously reducing pesticide treatments.

Researchers are mixing and matching several pathogen-specific resistance factors and sources of resistance within individual grape varieties. France’s resistant lineages were created by INRAE researcher Alain Bouquet and his colleagues in the mid-1970s. They utilised Vitis rotundifolia, a North American species, as their starting point. In Germany, other lineages were derived from interspecific hybrids that combined cultivated grapevines with wild North American and Asian Vitis species.

The "grapevine resistance” team is taking this foundational work in several different directions. One axis is identifying and characterising the genetic factors that confer resistance to both mildews. Another is developing genetic markers for recognising individuals that carry such factors during the seedling stage. Indeed, the first phase of breeding focuses on selecting candidate varieties, which means researchers must have marker-based tools to sort through the populations produced by genetic crosses. The team is also creating bioassays for identifying resistance factors, designing new research facilities (e.g., greenhouses, growth chambers) that will facilitate its plant analyses, and further describing the genetic diversity of the pathogens that cause downy and powdery mildew.

The team’s discoveries form the basis for intermediate and final breeding of candidate varieties under production conditions. INRAE experimental units take responsibility for the intermediate breeding phase, and the team’s regional partners perform the final breeding phase, under the leadership of the French Wine and Vine Institute (IFV). During each phase, researchers evaluate grape and wine quality as well as resistance to disease (e.g., downy mildew, powdery mildew, and others) and pests. Then, the scientists seek to register the top candidates in the French variety catalogue; acceptance allows commercialisation.

Between 2000 and 2014, three sets of crossing experiments were performed. They have resulted in nine resistant grape varieties being registered in the French catalogue.

Established in 2011 at the Grande Ferrade winery in Bordeaux, the ResIntBio experimental site has been comparing disease-resistant winegrowing systems (i.e., grapes that are resistant to both mildews) with conventional and organic winegrowing systems. The objective is to explore system functionality and to compare agricultural, economic, and environmental performance. ResIntBio research has shown that using INRAE’s resistant grape varieties can reduce mean treatment frequency index (TFI) values by more than 90% compared to regional standards. In 2017, INRAE and IFV launched the French National Observatory for the Deployment of Resistant Grape Varieties (OSCAR) with the goal of collecting and sharing information on the dynamics of downy and powdery mildew populations. OSCAR also seeks to uncover emerging health issues and inform the development of adapted viticulture systems. This collaborative network has linked INRAE with 34 different partners from IFV, various chambers of agriculture, and a number of interprofessional organisations. It currently has 150 plots in production over 75 sites.

First and foremost, larger numbers of resistant grapevines mean smaller quantities of fungicides. Faced with clear societal demands, the industry must drastically reduce pesticide use to protect human health and the environment.

The creation of resistant varieties is also a major step in the right direction: towards public policies that promote global health and the adoption of strategic objectives by the vine and wine industries. Since 2020, the French government has encouraged winemakers to plant mildew-resistant varieties, including those produced by INRAE-ResDur. These efforts are part of the CEPP regulatory framework (Certificat d'économie de produits phytosanitaires). In 2013, technical regulations for cultivated grapes were adapted to take disease resistance into account during the registration process.

Just as important, the "grapevine resistance” team has changed perceptions, practices, and activities in the vine and wine industries. As Christophe Schneider states with a note of pride, "We have managed to get the entire industry to join our quest to genetically improve grapes."

The group’s success has involved a dash of daring on top of tremendous luck, expertise, and perseverance. The "grapevine resistance” team has accepted its award with equal measures of pleasure and humility. François Delmotte says it acknowledges the group’s "long journey", while Didier Merdinoglu speaks in more precise terms, "It is the culmination of 20 years of collaborative work". Laurent Delière almost seems to walk on air as he comments, "The award is a boost that will energise our group and propel us towards new adventures". Finally, Christophe Schneider emphasises that it is a result of "a beautiful partnership". Every one of the team’s members has expressed thanks for INRAE’s continued support and resources.

The "grapevine resistance" team has brought together agricultural scientists, geneticists, pathologists, and oenologists from several research units whose ambassadors are: 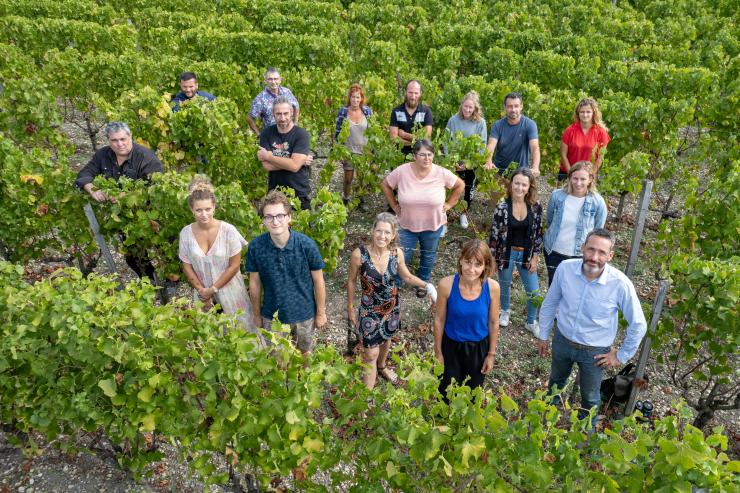 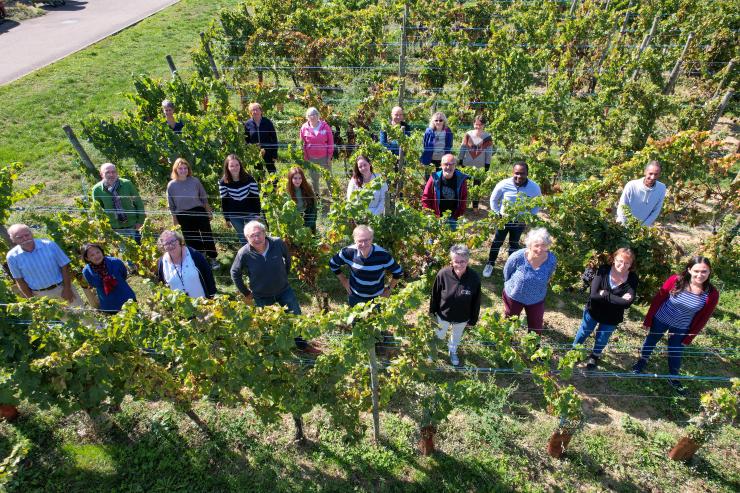 and not forgetting their colleagues and partners at the IFV; the Julius Kühn-Institut (Federal Research Centre for Cultivated Plants) and Fribourg Viticultural Institute in Germany; and Agroscope in Switzerland.

ACTION TODAY FOR THE GRAPES OF TOMORROW

Partnerships are being solidified with private-sector stakeholders, such as IFV and interprofessional organisations in France’s wine production regions. The goal: to create resistant grape varieties that also display region-specific characteristics.

On the research end, scientists want to use marker-assisted selection and multisite experimentation to reduce the time required to evaluate candidate varieties. They are aiming to drop from 25 to 15 years. Additionally, the search for new resistance genes continues with a view to offering different combinations. It goes without saying that future grapes will be resistant to downy and powdery mildew. However, the team is tackling other pests as well, such as black rot, phylloxera, and grapevine fanleaf virus.

Disease-resistant varieties are just entering into use. Laurent Delière comments, "We will be able to monitor the real-time effects of a given variety on pathogen populations at the landscape scale". Researchers will be able to watch for and deal with pathogens' attempts to evade plant resistance. To this end, they are identifying avirulence genes and developing new genetic tools that are both fast and effective. Team members in Bordeaux want to explore prevention tactics, such as prophylactic treatments that complement grape resistance or natural forms of disease regulation and biocontrol.

Indeed, resistant varieties may be the first paragraph of a new chapter in grapevine history: "the grapes of tomorrow may have no need for today's pesticide treatments or grafting techniques".

The germination rate for grapevine seeds is 50%, which means that around 500 seedlings emerge for every 1,000 seeds sown. Early on, 5 candidate varieties are chosen for use in intermediate breeding. Final breeding focuses on 10 varieties.