The most widely eaten vegetable in France, tomatoes have many hidden health virtues. Low in calories, rich in fibre, they also contain carotenoids, mainly lycopene, whose anti-oxidant and anti-inflammatory effects have been known for the last two decades. They also provide vitamins and minerals. But such health benefits depend on a large range of factors. First, they are linked to the concentration of such beneficial components, which, in turn, depend, among other things, on the tomato's variety and growing conditions. Then, the effects of those components depend on how well they are assimilated by the body, that is to say their bioaccessibility and bioavailability 1. Those properties are also influenced by the techniques used to process tomatoes.

It is all those factors that are being analysed at INRAE in a production/quality/health study continuum, that has given rise to some wide-scale multidisciplinary programmes 2.

The tomato's contributions to health

Lycopene has anti-oxidant and anti-inflammatory properties

Just by itself, lycopene possesses proven beneficial effects against oxidative stress by fixing reactive forms of oxygen. Linked to those anti-oxidant properties, as they share, in part, the same molecular pathways, lycopene has anti-inflammatory effects, which in humans are correlated to a decreased risk of cardiovascular complications, metabolic syndrome 3 and certain cancers. The work of Jean-François Landrier's team has contributed to efforts to characterise tomatoes by revealing lycopene's effects in situations of obesity. Obesity is accompanied by the production of inflammatory substances in adipose tissue, the liver and muscles. Those substances act on cellular insulin receptors, leading to insulin resistance and increased glycemia 4, risk factors for diabetes. In obese mice that are given feed that includes a tomato powder supplement, this cascade of events is abated by lycopene's anti-inflammatory effects. The same INRAE team has also demonstrated such effects in vitro, on adipocyte cultures.

“These encouraging results in mice have led to a clinical study in humans that is supposed to begin in 2024 at the La Conception Hospital’s clinical investigation centre in Marseille. It will involve observing the effects of tomato powder included in the food of prediabetic people, with a view to prevention,” announced Jean-François Landrier.

The tomato powder used in studies on mice or humans is a very interesting form for consumption. It is practical to use and could be available year-round. It is already widely used in industry, in soups and many different prepared dishes. “We know that lycopene is more bioavailable in tomato puree than it is in fresh tomatoes. It's a relatively stable substance. As part of our TomHealth 2 project, several teams 5 are working on optimising the tomato powder manufacturing process, in particularly the drying stage, so as to preserve its nutritional qualities,” added Jean-François Landrier. A similar project, TomAbility 2, is focussing on the properties of tomato puree.

Another factor that has to be considered: the tomato's growing conditions, particularly the impact of water deficits, which are becoming an increasingly significant problem against the backdrop of global warming.

“Tomatoes are an irrigated crop, whether in open fields for industrial use or in greenhouses/tunnels for table tomatoes. It is important to understand the influence that water stress has on tomatoes' health benefits, so as to adjust irrigation practices,” explained Nadia Bertin.

Some studies have shown that such stress may promote carotenoid production. That does, in fact, seem logical when you know that one of the physiological roles of carotenoids (see inset) is to protect plant cells from oxidative stress, which may sometimes accompany water stress 6.

However, the situation is more complex. According to Nadia Bertin, a range of work, including some by her team, has shown that the effects of a water deficit depend on its intensity, the stage of plant growth when it occurs, and, finally, the genotype of the tomato tested. Also, it should be recalled that when there is a water deficit, tomatoes have a lower water content, which does lead to more concentrated carotenoids, without any increase in their synthesis.

“In any event, our work has allowed us to identify the more carotenoid-rich tomato genotypes, such as, for example, the H1311 cultivar developed by Heinz. However, this genotype is less productive under stress. As is often the case, you have to find a compromise between yields, quality and resistance to stress. That is why all those components have to be fully integrated," concluded Nadia Bertin.

Versatility of carotenoids in tomatoes 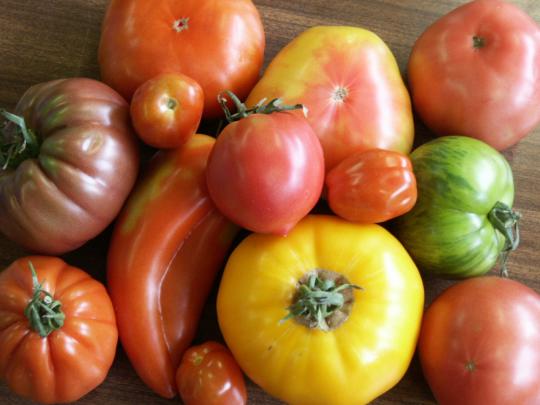 Carotenoids take part in a wide range of physiological mechanisms within plants, including growth, development and responses to environmental factors. As photosynthetic pigments, they contribute to the photosynthesis process. The colours they give flowers and fruit (red for lycopene, orange for beta-carotene) also help attract pollinators and predators.

Nadia BertinPlants and Cropping Systems in Horticulture (UR1115 - PSH)

The influence of genetics on nutritional requirements

PRESS RELEASE - Approximately 0.1%: that is the average genetic difference between two individuals. This small percentage is responsible for the variations of certain physical traits, such as eyes, hair, and height, but also for differences in our susceptibility to certain diseases and our capacity to absorb vitamins and phytomicronutrients (carotenoids, polyphenols, etc.), involved in the prevention of chronic disease. Based on the study of genetic interindividual variability, researchers from INRA and Aix-Marseille University have published a review on current knowledge of nutrigenetics in the Annual Review of Nutrition on 21 August 2018. The objective of this emerging science is to personalize nutritional recommendations in order to optimize nutrient, micronutrient, and phytomicronutrient allowances by taking into account genetic differences between individuals and groups of individuals.

An isocaloric 8 weeks dietary intervention with a Mediterranean diet (MD) in obese and overweight subjects with life-style risk factors for metabolic disease leads to a decrease in total plasma cholesterol proportionally to MD-adherence rates along with consistent gut microbiome and systemic metabolome changes, finds a research published in the journal Gut

The consumption of natural marine ingredients could prevent memory decline and loss of autonomy during aging. This is suggested by a study on the beneficial effects of a marine hydrolysate obtained from sardine heads using a dual approach: in vitro on cell cultures and in vivo on a preclinical model.