Once upon a time was the rose, domesticated thousands of years ago, and a biological research scientist who loved this queen of flowers. A long and beautiful relationship links Mohammed Bendahmane and the rose, which he recounts with passion and enthusiasm. It was first of all the story of a family: “my father taught biology so I grew up in an environment where biology was present all the time”, he explains, telling us that his brother also became an INRA scientist. So it was quite natural for him to follow a scientific pathway, with the aim of focusing his research on the plant world. He obtained a degree in biology in Morocco and then pursued his studies in France in the early 1990s, completing his PhD at CNRS in the field of plant virology. After a six-year stay in the USA, working on viruses and then plants, in 2000 he joined the Joint Research Unit for Plant Reproduction and Development in Lyon, where he still works. His love affair with the rose started on his return to France.

If you please, draw me a rose!

Mohammed Bendahmane’s initial research at INRA concerned the morphogenesis of plant organs, the aim being to understand how petals form and what determines their number: “When you offer flowers to someone, the first thing they look at is their shape, and therefore their petals!” But the purpose of his research was clearly not just aesthetic, even though this has its importance in attracting pollinating insects. He and his team identified two genes involved in the proliferation and expansion of petal cells, and indeed one of these genes is also very important in humans, where in fact, it is involved in 80% of cancers and plays a major role in regulating the rate at which cells divide. The higher the rate of cell division, the more the cells will divide in an anarchical manner: “this explains what might happen in humans, but we have demonstrated it in plants”.  Numerous oncology researchers now apply these findings, but Mohammed Bendahmane is pursuing his adventure with plants, advancing the hypothesis that by modulating the amount of proteins coded by this gene, it may be possible to increase the growth rate of plants of agronomic interest. This discovery would enable a gain of four days of growth over a 40-day period and thus offer practical agronomic applications that are currently being tested in the context of a partnership between INRA and a private firm.

From garden to test tube

But is not just a question of finding out what happens in the sixty or so roses that Mohammed Bendahmane tends in his garden. There are also scientific issues: “the rose has the greatest diversity of traits out of all ornamental plants”, and belongs to the same family of Rosacea as strawberries, raspberries, pears and apples. Understanding the genetics of roses can also help us to understand those of these other plants of agronomic interest. When Mohammed initiated his research on the rose, no genomic, molecular or biochemical information was available on this plant. He and his team started by sequencing the genes expressed during the development of flowers, roots and leaves, etc. “But this only accounted for 7% of the genome, so we needed to push towards the full genome!”  This was a major challenge for Mohammed Bendahmane, his team and their colleagues, the rose genome being highly complex because of the numerous inter-species crosses that have been made over thousands of years. The first step was to choose which genome to decipher from amongst 200 potential species. The lucky winner was Rosa chinensis “Old Blush”, a rose from China that flowers several times a year and is also the principal ancestor of modern rose varieties. Eight years later, in 2018, the scientists were able to announce that they had sequenced the rose genome! “It is one of the three best plant genomes to have been sequenced worldwide, alongside rice and Arabidopsis”, explains Mohammed, before adding modestly “this is a small step for man. The genome provides us with foundations but we can now look ahead to 20 years of research in order to read and understand it. Deciphering this genome has already enabled the team to elucidate the mechanisms by which a gene controls the formation of numerous petals, the flower and reproductive organs. Even more interesting, the scientists have identified a protein responsible for perfume biosynthesis which also exists in humans, where it has proved its ability to “detoxify” carcinogenic cells.

Building the family tree of the rose

Modern roses are the result of crosses between Chinese, European and Middle Eastern roses, each with their specific traits: Chinese roses have a very particular scent and flower several times during the year, while European roses are capable of resisting environmental constraints. Deciphering the genome has made it possible to track this domestication and determine the origins of different rose varieties. In order to clarify their results, the scientists did not limit themselves to a single genome but sequenced that of 14 other roses, including the first modern hybrid – “La France” – which was obtained by a cross in 1867. This work enabled identification of the provenance of several traits of interest in the rose and in some cases to show which genes control them. This also helped to reconstitute the family tree of Rosacea and, for example, showed that the strawberry and rose are in fact very close. And when we know that pear and apple trees take several years to flower, but the rose flowers in its first year, one can understand the value of identifying the genes responsible for these traits.

…and that's just the start of the story!

According to Mohammed Bendahmane, “there are still many things to discover”, and this genome is now being used throughout the world. When asked whether he would like to work on a plant other than the rose, this nature lover replies with philosophy and humour that “the rose has a long history with humans; its domestication dates from 3000 BC and the love affair continues, so I don’t see why I should stop!”  This work of major importance is now being rewarded by the Grand Prix from the French Academy of Sciences, an acknowledgement that the scientist fully appreciates: “it is an honour as a scientist and a source of pride for all members of the team who have worked with me”. These lengthy efforts are reflected in a quotation from Antoine Saint-Exupéry in The Little Prince: “It is the time you have wasted for your rose that makes your rose so important". 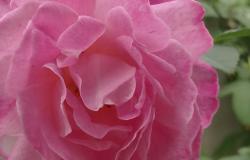 The rose: an ornamental plant emblematic of the cultural and economic history of mankind. An international consortium involving INRA, ENS de Lyon, CEA, CNRS and Claude Bernard Lyon 1 University, has deciphered the genome of the rose. This work has made it possible to trace the respective contributions of European and Chinese roses to the genome of modern roses, and to identify genes involved in the perfume and colour biosynthesis pathways.