The intersection between living things and minerals

I wanted geology with a bit of life

Soil is the thinnest layer of the Earth’s crust. Soil — or, more correctly, soils — are home to a quarter of the planet’s biodiversity, and are almost wholly responsible for the food we eat. Chenu became interested in soils over the course of her studies at the École Normale Supérieure of Fontenay-aux-Roses.

Chenu joined INRA in 1982, working in the Soil Science laboratory at INRA Versailles Grignon. There, she became interested in clay–neutral polysaccharide interactions in order to better understand biological aggregation phenomena. She received her Ph.D. in 1985.

“I knew I wanted to study the interaction between organic matter and minerals,” Chenu explains. “I was convinced — and still am — that a number of macroscopic soil phenomena, such as soil carbon dynamics, are determined by the interactions between minerals, organic matter, environmental conditions and microorganism activity.”

Chenu developed an innovative approach, using scanning and transmission electron microscopy techniques to study soils. She then combined her expertise in soil structure with that of her colleague Jérôme Balesdent, who studied isotope biogeochemistry — a field of that makes use of the natural abundance of carbon-13. She demonstrated that the composition of soil aggregates controls soil carbon dynamics — a cutting-edge international discovery that was lead by teams at INRA. A raft of scientific publications ensued. Chenu’s work gave rise to a new field of study that other researchers would further explore. It seems to be a common pattern in her work, Chenu confides.

At the time, the scientific community’s vision of soil organic matter was complex, and seen mostly through the lens of chemistry. Under the microscope, however, Chenu saw organic matter, microorganisms and metabolites, all signs of organic processes and adsorption at work, where organo-mineral associations play an essential role. It was a groundbreaking discovery in the field.

Twenty thousand leagues (or thereabouts) under the soil

Chenu went on to investigate spatial heterogeneity in soil, focusing on microbial hot spot activity and outcomes for plant residues. With a whole team behind her, Chenu developed new research methods and tools. Her work with Laure Vieublé-Gonod in particular generated a number of playful nicknames, such as the “deli slicer ” and the “custom french fry cutter”, for tools needed to extract soil samples. “We certainly had a lot of fun,” says Chenu.

At the same time, Chenu took on the mantle of management, becoming director of the Soil Science research unit in 1998. “I was exceedingly organised,” she explains. “In the morning, I was the Unit’s director; in the afternoon, I was a researcher.”

In 2003, Chenu traded her half-time position as unit director for a half-time professorship at AgroParisTech. A small but significant change, Chenu acknowledges. “I loved it. The interaction with students, planning curricula, being in charge of an interdisciplinary master’s programme: it was great.

In 2004, Chenu joined the Biogeochemistry and Ecology of Terrestrial Environments (BIOEMCO) laboratory, where she led the team researching organic matter. She worked alongside new colleagues, including Cyril Girardin, who shared Chenu’s interest in isotopic labelling of soil organic matter. Chenu continued her research into the spatial heterogeneity of microbial activity. Her work ranged from studying microbial ecology in various sizes of soil pores with her colleague Naoise Nunan to the interdisciplinary, French National Research Agency project on multi scale modelling and emergent properties of microbial degradation of soil organic matter (MEPSOM, 2010–2013). In collaboration with her team, Chenu demonstrated that the microbial environment has a greater influence on rates of organic matter biodegradation than the diversity or make-up of microbial communities present in the soil. Currently, Chenu can be found working in the Functional Ecology and Ecotoxicology of Agroecosystems (ECOSYS) Joint Research Unit (INRA, AgroParisTech). There, she can be found working on the Soilµ3D project — an offshoot of the MEPSOM project, coordinated by Patricia Garnier — continuing her research into microbial outcomes in soil micro habitats using 3D modelling techniques.

From the early stages of her career, Chenu has been bringing together research, training and teaching, combining her natural ease in explaining things with a smile that never seems to leave her face.

In 1998, the French ministry for ecology established the Soil Environmental Functions—Soil Heritage Management (GESSOL) programme, with Chenu as Chair of its scientific committee. It was a period of intense activity for her, grounded in public policy, with frequent communication initiatives. The work was driven by “a clear policy focus that gave meaning to the research we were doing,” she says. “I loved it. The team was really extraordinary.” In 2004, the French ministry for the environment established the Scientific Committee on Natural Heritage and Biodiversity, with Chenu as its vice president. She has fond memories of the Committee’s dynamic work, and for the potential to make a lasting contribution to the scientific community.

When public policy initiatives align with our field of research, it’s really wonderfu

In 2015, Chenu was named Special Ambassador for the FAO International Year of Soils, a unique role in which she sought to promote awareness of the multifunctional role of soils and the considerable pressures they are now under. She participated in the 2015 United Nations Climate Change Conference (COP21), and also took part in France’s 4 per 1,000 initiative on agricultural soils for food security and climate, and was vice president of its international scientific and technical committee.

“Our research focus is increasingly in the spotlight because of environmental concerns,” Chenu says. As a result, media outlets, the scientific community and public policymakers frequently call on Chenu for her expertise . Nevertheless, Chenu makes sure she is always able to keep a bit of free time to herself.

Research and teaching, a lifetime’s adventure

The 2019 Lifetime Achievement Award is a recognition of Chenu’s extraordinary and distinguished career. Instead of shining a light on her achievements, however, Chenu would sooner give prominence to important issues and collaborative efforts. For Chenu, the Award “will be a great opportunity to talk about soils, and a real celebration for the team as a whole.”. 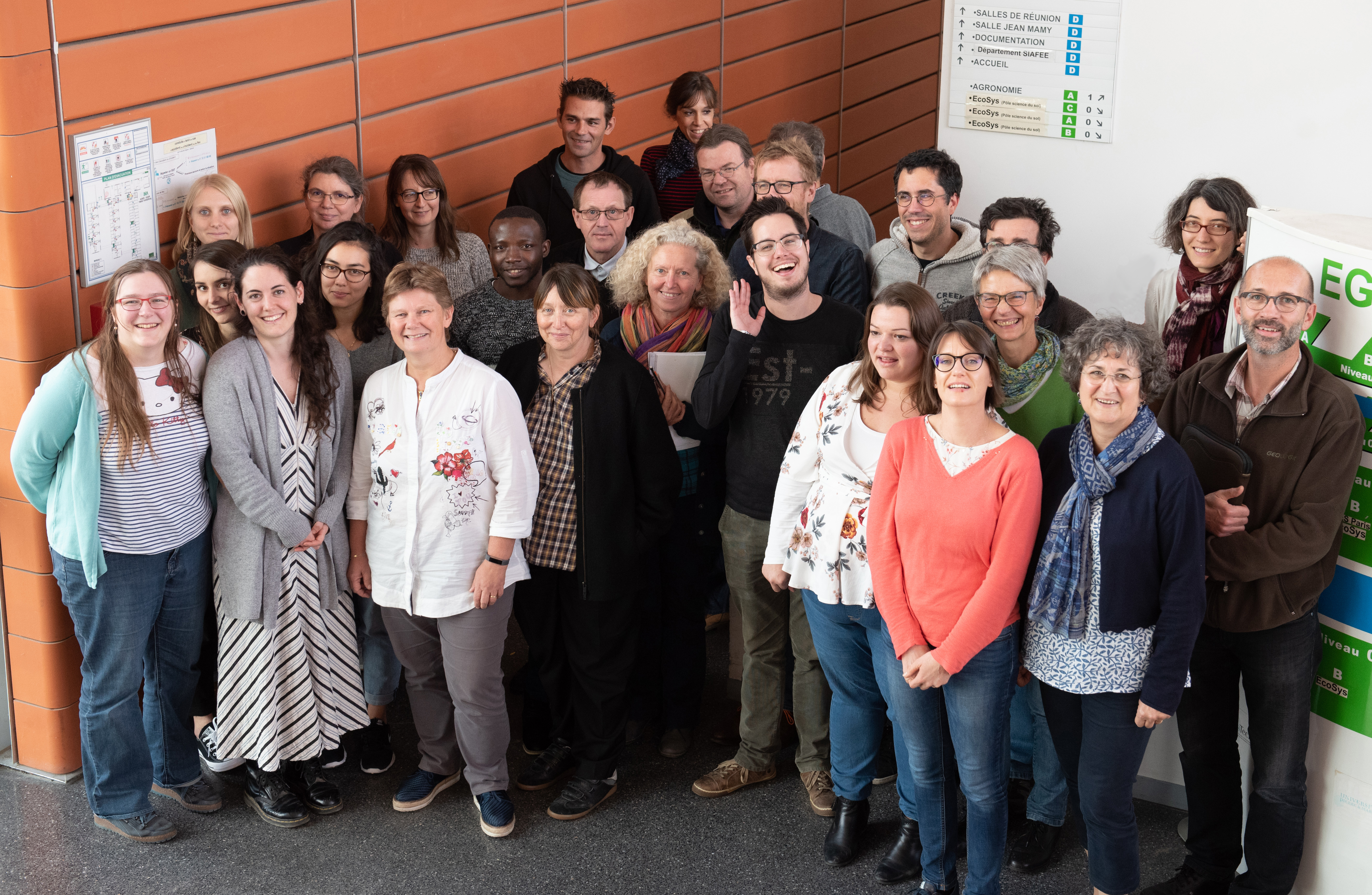 Chenu, her teams and her students are currently focusing their attention on the impact of agroforestry and conservation agriculture on carbon storage, analysing processes driving carbon persistence, microbial microhabitats and the ecosystem services provided by soil organic matter in urban micro-farms. Also on the go are a French National Research Agency project on the potential for agricultural soils to store carbon and a European network set up by Pierre Barré to study long term bare fallow. Chenu recently spoke in Australia about the important work of the network. “It is an important tool for understanding soil carbon stability and how it changes over time, and for testing processes over long periods, such as the priming effect, where soil organic matter decomposition rates increase after fresh organic matter is added to the soil .”
This work has frequently taken Chenu outside of the Île-de-France region, although perhaps not for much longer. Under the aegis of a European project, Chenu has recently taken on a roll that will see her return to the fold at INRA while maintaining her professorship at AgroParisTech. Could it be that her well-travelled childhood has encouraged her to stay closer to home now?