When she was little, Céline Pelosi wanted to be a veterinarian. As she got older, she took an interest in animal behaviour, particularly that of the great apes. As part of her Master’s degree in ecology, biodiversity and evolution, she took a class on earthworms taught by Patrick Lavelle, professor at Pierre and Marie Curie University and a brilliant soil ecologist. That is when she had a eureka moment, and realised she wanted to dig deeper and study soil ecology. To her, it made sense. “I like having my feet on the ground. Not the water, not the air, soil suits me just fine!” she says with a smile.

Ecological processes, from plot to landscape

From 2003 to 2005, the young student did several internships in INRAE’s Biodiversity and Soil Science research unit (BioSol) in Bondy, which was headed by Patrick Lavelle at the time. Céline learned a lot about soil populations and ecosystem services, thanks notably to the Millennium Ecosystem Assessment (MA). From 2001 to 2005, the MA tapped into the expertise of some 1,360 specialists from 95 countries to assess the consequences of changing ecosystems on human health and well-being.

Then opportunity came knocking, and Céline had the chance to do a thesis in this very laboratory of the French National Research Institute for Sustainable Development (IRD). But she didn’t want to pursue fundamental research in ecology. She knew that INRA, now INRAE, was the place for her, since the institute combines fundamental and applied sciences to allow for targeted research.

“That is how I started my doctoral thesis in the Agronomy research unit at the Versailles-Grignon centre”, she says. Under the supervision of Jean Roger-Estrade, Professor of Agronomy, her studies focused on the impact of crop systems on soil organisms, and in particular earthworms. This is the time that ecologists started making their way into agronomy labs.

Her thesis dealt with soil biodiversity at plot level, but Céline wanted to look at the bigger picture. Indeed, she was convinced that important things were happening at landscape level, so she set out to pursue post-doctoral studies in the ecology of landscapes in the Dynafor joint research unit (Dynamiques et écologie des paysages agriforestiers) in Toulouse. This allowed her to look at how landscape features (hedges, uncultivated areas, etc.) influence what is happening in plots. Her work dealt with how agricultural management fits in with ecological process management at the spatial level and came with a social aspect that she enjoyed.

Better assess the impact of pesticides on earthworms

In 2011, Céline became a research scientist at INRA (now INRAE) in the joint research unit EcoSys (Functional ecology and ecotoxicology of agroecosystems) in Versailles. There, she carried out work on soil ecotoxicology that led to approaches and tools for better evaluating the environmental risk of pesticides and quantifying how they affect soil organisms like earthworms and their close cousins, enchytraeidae. Both species are indicators of agricultural activity in farming systems.

To evaluate and curb the negative impact of pesticides on soil biodiversity, tests were carried out on earthworms before the products were put on the market.  The recommended species for testing, Eisenia fetida, stands up well to pesticides and is not easily found in cultivated fields. A paradox that the budding researcher explored by studying the sensitivity of several species of earthworms to pesticides to open up a discussion about how suitable they are for testing.

At the same time, Céline had a hand in modifying an international standard for ecotoxicological tests carried out on earthworms.  The goal was to offer an alternative to the species hitherto used by recommending Aporrectodea caliginosa, a species found in cultivated soil and more sensitive to pesticides and therefore more relevant. The new standard will come into effect in 2021.

The overall goal? Open up the lines of communication between ecotoxicology and agroecology to promote more sustainable agricultural systems.

Céline would spend the next seven years pursuing that goal, keen to bring ecotoxicology, traditionally limited to laboratories, into the field, with species that are more sensitive to pesticides and more present in soil. She also shone a light on landscape ecotoxicology as it relates to pesticides. From 2015 to 2019, Céline coordinated the Rescape project - Resistance of landscapes to pesticide transfers in soils and living organisms (APR 2014 Ecophyto), designed to evaluate the impact of landscape features (composition and structure) and farming practices (particularly  pesticide input) on landscapes’ resistance to pesticide transfers in soil and living organisms.

In September 2019, Céline left Paris for Avignon, where she joined the Mediterranean Environment and Modelling of Agro-hydrosystems research unit which carries out studies on soil physics, climate change and living organisms of soil. “After focussing on landscapes, I wanted to come back down to earth, so to speak, to better understand biophysical processes in soil”, she says.

Céline explored how enchytraeidae modify soil structure (interactions with other worms, sensitivity to other environmental factors, etc.). These organisms, less sensitive to pesticides than earthworms, can pick up where earthworms leave off if the latter are affected by pesticides, especially since the two happen to play a similar, and complementary, role in soil.

Céline also contributes, along with her colleagues from the research unit, including Yvan Capowiez, and those at the University of Avignon, to MédiClim, an experiment designed to study the impact of climate change in the Mediterranean region on soil, animal populations and related functions. 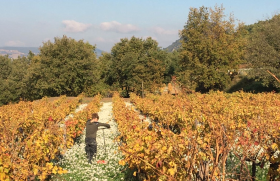 The team of experts is also carrying out research on soil revitalization within the framework of the ReVers project (Revitalization of vineyard soils by inoculation of earthworms, 2020-2023), winner of the  SUEZ “Acting for Natural Capital” call for projects in the “Technical and Digital Innovation” category.
In conjunction with local stakeholders, the project seeks to help revitalize degraded soils using innovative remedies designed to jumpstart biological interaction networks, like massive input of organic matter in soil and earthworm inoculation. The project promotes nature-based solutions as an alternative to current farming practices.
Along the same lines, Céline is involved in the creation of a start-up involved in producing and marketing earthworms to revitalize soil or for use in labs that carry out testing before bringing pesticides to market.

“It’s a new adventure, another facet of research”, exclaims Céline, whose goals is to put useful tools, the fruit of research, into the hands of farmers and improve risk assessments in agroecosystems.

“Bringing it all back down to people is key and makes our research meaningful”, she says.