Saint Nectaire, Cantal, Salers, Bleu d’Auvergne, and Fourme d’Ambert: these five PDO cheeses are produced on the natural grasslands of the Massif Central, in the commune of Marcenat. These summer mountain pastures located at an altitude of 1.000 metres, where in days gone by cows used to be carried up the mountain by railway, is home to the INRA Auvergne Rhône-Alpes experimental farm. In this beautiful landscape, at the heart of the Cézallier plateau, a team led by Bruno Martin from the Herbivore Joint Research Unit (UMR1213 Herbivores) works to establish the relation between the quality of the grassland grazed by the cows and that of the products obtained from the animals. Natural grasslands offer more than one benefit, including rich plant diversity and the fauna that comes with it. They are a rich natural heritage! In fact, Martin explains that some countries decide to stamp labels like “Origin Green” in Ireland or “100% Grass fed” in the United States on their products in order to enhance their value.

Natural grasslands, the secret behind the quality of our cheeses

Cheese will help preserve our grasslands.

In France, for over a decade now, INRA has carried out important studies to describe and authenticate the products that come from grass fed animals. Be it the taste or texture of milk or the flavor of butter, cheese or meat, researchers have ascertained the impact of grazing on product quality. The grasslands’ natural plant diversity plays a key role in cheese, which means that the link between product and land is particularly important for this product. For Bruno Martin, this is an argument in favour of PDO cheesemakers who seek to strengthen their strategy of standing out thanks to the quality derived from the place of origin. For example, specifications for Saint Nectaire stipulate that 90% of the grasslands used for the production of their cheese must be natural grasslands.

Researchers were also able to demonstrate the nutritional benefits of grazing for milk and cheese, especially in the case of diversified grasslands. They observed a substantial reduction in saturated fatty acids, an increase of polyunsaturated fatty acids like Ω3, better Ω3:Ω6 ratio, and an increase in the content of antioxidants and certain vitamins. The actual effects of grazing depend on the percentage of grass present in the animal’s ration; however, the nutritional quality of these products will always be greater than that of products derived from animals fed with compound feed or corn silage.

In recent years, researchers have shown interest in the microbiota of milk and cows—intestines, rumen, and udders. Within the framework of the DIVEM project (Diversité végétale et microbienne), Bruno Martin and his team started following two groups of cows last winter on the Marcenat Experimental Farm. One of the groups spent the summer on pastures with little diversification, mainly composed of grasses and legumes, while the other enjoyed a plot rich in diversity (see slideshow). The objective was to go beyond the gustatory and organoleptic qualities of products from grass-fed cattle, focusing on the role of tannins—plant secondary metabolites that modulate the microbiota dynamics. Researchers have found that plant secondary metabolites modify milk fat composition, although they do not yet know their action mechanisms on the animals’ rumen.

Thanks to the collaboration between the Herbivore Research Unit and the Cheese Research Unit, Marie Frétin’s thesis has demonstrated that the development of gustatory qualities of cheese is the result of the interaction between microorganisms and the chemical composition of milk and cheese. For example, milk fat composition—which can be modified through the cow’s diet—may influence the microbial communities on the surface of cheese which form the rind. Martin declares that the microbial and biochemical aspects are closely related. Advances in metagenomics offer tools to better understand the factors behind the composition of the microbiota of both the animal and raw milk. For Martin, it is imperative to value the link between product and land and to raise awareness of the key role of natural grasslands on the quality of our cheeses.

How many insects does a cow swallow while grazing? 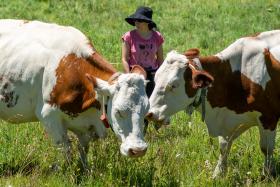 Gaëlle Maxin has been working on new foods for ruminants since 2016. Unlike pig and poultry breeding, the European Union has not yet authorized insects as part of the ruminant’s diet. But, how many insects will a cow need? Maxin has searched through scientific literature to find publications that study the amount of insects that grazing cows ingest. The issue is not so much health-related, as a matter of supply.

One of the challenges of these studies is to propose alternatives to the proteins currently used—mainly soy. Another important goal is to move towards a more circular economy, for example, finding better uses for waste. “On the ruminants’ diet we must evaluate more than just the nutritional value,” explains Maxin. In fact, multiple other elements keep gaining importance: the effects of the animal’s diet on the quality of the products, on the methane and ammonia emissions or on the animal’s health; the lack of competition with human food; the return to grazing on diversified grasslands, etc. Multicriteria evaluation is now the cornerstone of Maxin’s work.

A passion for animal sciences and a love of mountain life make Bruno Martin an interesting creature. “I was determined to combine both ‘sides’ of my life!” This clearly drawn path led him to a career as an engineer in dairy production in mountain areas. A steady climb since has allowed him to associate livestock farming practices with cheese quality.

Born of a meeting between know-how in French cheese-making and science and innovation, the start-up Les Nouveaux Affineurs aims to replace dairy-based cheeses with matured plant-based cheeses. Nour Akbaraly tells the story of this start-up, born in 2017.

Disarming a probiotic to improve its benefits

PRESS RELEASE- For more than a century, the Nissle 1917 strain of the bacterium Escherichia coli has been used as a probiotic to treat gastrointestinal disorders. However, this bacterium also produces a toxin, colibactin, which has deleterious effects on host DNA and might cause colon cancer. It is therefore crucial to understand the mechanisms at play in the strain if we wish to limit undesirable side effects. In a recent study, researchers at INRA, INSERM, the University of Toulouse III - Paul Sabatier, and ENVT managed to decipher certain pathways by which Escherichia coli Nissle 1917 produces both beneficial and toxic compounds. They then successfully created a modified strain with the same probiotic properties but an unactivated version of the toxin. This work was published on September 23, 2019, in PLOS Pathogens.