What gave you the idea to turn waste into pebbles?

It all started in March 2018: William is a stonemason who often works with tufa stone, which is commonly found around Angers. As a specialist in concrete formulation and an environmentalist, especially regarding waste management, he had the idea of turning it into pebbles. He eventually convinced his sons to join him in the adventure. They took part in a start-up weekend event held by AgroParisTech at Polytechnique. That’s where I met them and I was fascinated by their project. You might say I was adopted into the family! (Laughs). We officially created the start-up in January 2019. We’re specifically focused on non-recyclable waste. For now, we want to deal with “mixed” construction site waste such as plasterboard, plastic and PVC. We’re also attempting to recover sludge from wastewater treatment plants. Turning this waste into aggregate will be very useful since 360 million tonnes of aggregate is used every year for construction in France, making it the number one raw material for the sector! For example, aggregate is used to make road underlays or as a component in concrete. One kilometre of road uses around 3,000 tonnes of aggregate. Aggregate extraction must become more widespread going forward because not only is new aggregate not very ecological, but this resource is becoming scarce in some areas. We suggest using waste to make the raw material. 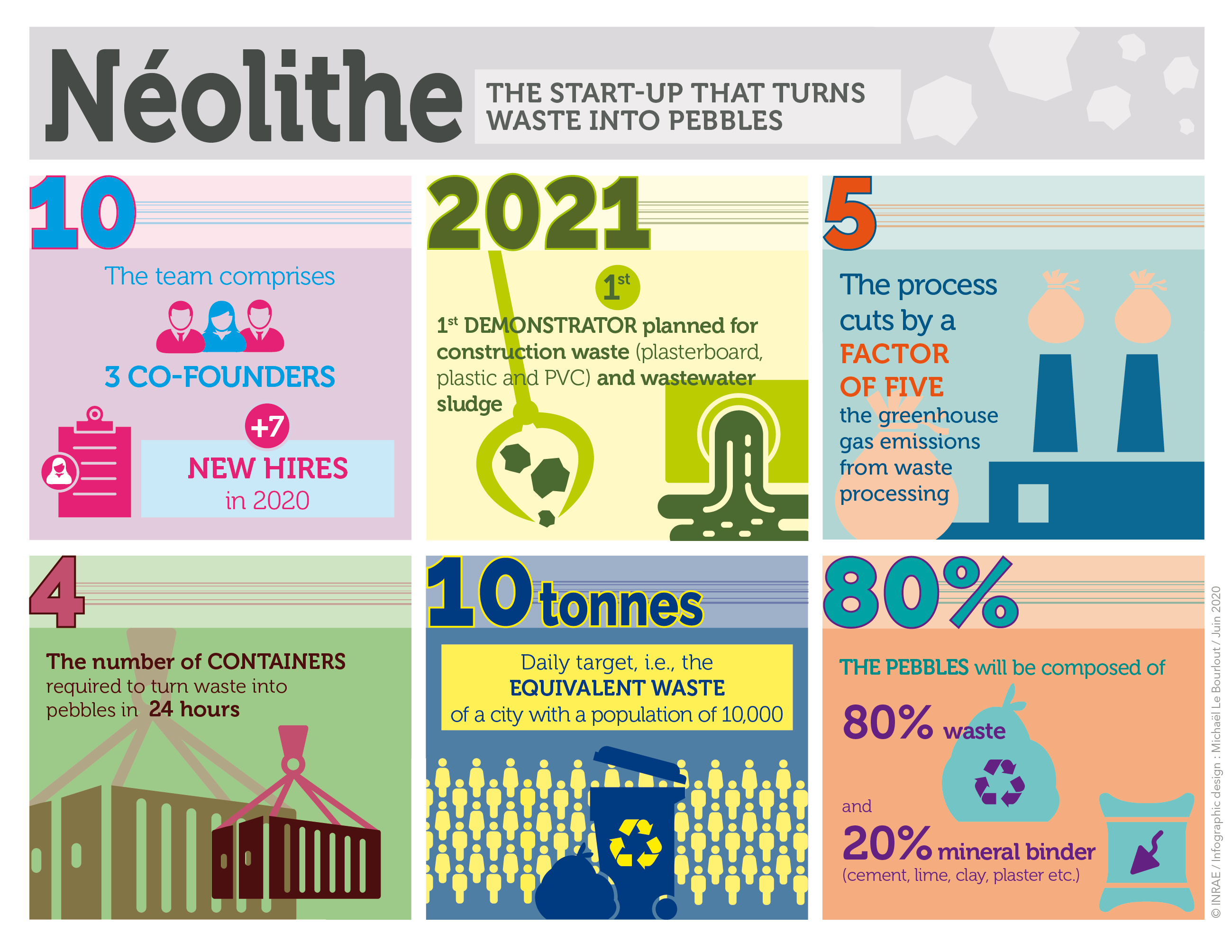 What is your connection with INRAE?

We were initially part of the 3BCAR programme, and we had meetings with INRAE researchers. They answered all our questions about processes such as grinding and drying. The three meetings we had helped guide our research and development. We’re partnering with ADEME; AgroParisTech; and the Polytechnique, Centrale de Nantes and Saint-Nazaire laboratories, and are also working with the IAR Bioeconomy Cluster.

So how do you envisage the future for your start-up?

4 containers to process waste into aggregate in just 24 hours

We’re currently in an experimental phase. We’re demonstrating the feasibility of our project to move towards industrialisation by October or November 2020. Our goal is to have a mobile facility to process waste locally, which would eliminate the need for minimum tonnage. Four containers would be set up at collection sites to process waste into aggregate in just 24 hours. Today, 30 million tonnes of waste are buried or incinerated each year in France, accounting for 6% of the country’s greenhouse gas emissions. Our fossilisers would put an end to this at the same cost as current methods. In Angers, we’re in contact with horticulturists, for example, who are holding onto large numbers of plastic pots they’d like to get rid of. We’re processing byproducts of the bioeconomy. Our first demonstrator is expected to be ready in 2021, and our final objective is to turn household waste into aggregate.

2G Ethanol: Futurol technology is almost on the market

At the end of 2018, commercialisation of the Futurol process was entrusted to Axens, and ARD acquired the pilot plant, a valuable tool that will support its international deployment.

Towards better methods for harvesting microalgae

Microalgae are currently a promising resource, notably for producing biofuels. However, harvesting them remains a challenge, which limits their exploitation at industrial scales. Scientists in the Joint Research Unit for the Engineering of Biological Systems and Processes - LISBP, have made discoveries that could help develop more effective harvesting methods. Their results were recently published in Algal Research.

Biofuels and biomaterials: a new enzyme could be a game-changer

A novel enzyme that can degrade the xylan which coats the fibres of wood cellulose offers new prospects of significantly optimising the breakdown of lignocellulosic biomass and the processing of cellulose. Three patents have been filed by INRA relative to the production of fermentescible sugars and the defibrillation of cellulose substrates.