In 2008, Guillaume Jubeaux joined IRSTEA’s Ecotoxicology laboratory in Lyon. The lab is now an INRAE unit for multidisciplinary research and development known as RiverLy that specialises in hydrosystems. 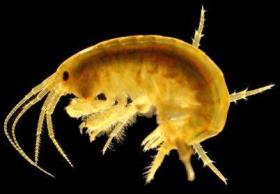 Guillaume’s relationship with the scud (Gammarus fossarum) began during his doctoral thesis, where he worked on the development of biomarkers for endocrine disruption in this little crustacean.

Now a qualified ecotoxicologist and co-founder of Biomae (Biomonitoring Aquatic Environment), a start-up carrying out specialist chemical and ecotoxicological monitoring of water and aquatic habitats, he is one of the company’s two directors, overseeing the technological side of the business.

How did Biomae get started?

Guillaume Jubeaux: At the end of 2012, once I had completed my doctorate, I was keen to become involved in developing and marketing research-based products and applications so I got together with two researchers from my laboratory, Olivier Geffard (who was one of my thesis supervisors) and Arnaud Chaumot, to set up a transfer project that could develop tools to assess the impacts of micropollutants (pesticides, metals, oils) on aquatic habitats and to track what then happened to them.

Ecotoxicology: at work in the space between chemistry and ecology

At that time, ecotoxicology was still stuck inside the lab and Olivier and Arnaud had been working since 2004 on an organism that they hoped would be useful for on-site testing. The scud, which is naturally prolific in French and European watercourses, is a small crustacean that reacts quickly to any significant levels of contaminants in its system. The two of them had perfected a way of caging these organisms so they could be placed directly into the water environments that needed to be tested. They had also developed techniques to analyse and measure the accumulation of micropollutants and their effects. Last, they had defined the reference values that would allow them to interpret these results.

In the course of 2013, while I was using the Créalys incubator in Lyon, now a SATT (acceleration and transfer company) and renamed Pulsalys, I met the business developer Laurent Viviani. He would turn out to be the ideal partner to run the operational side of Biomae, registering patents and protecting expertise, studying potential clients’ needs, putting together commercial offers and so on.  The following year, on 27 May 2014, Biomae formally came into being. 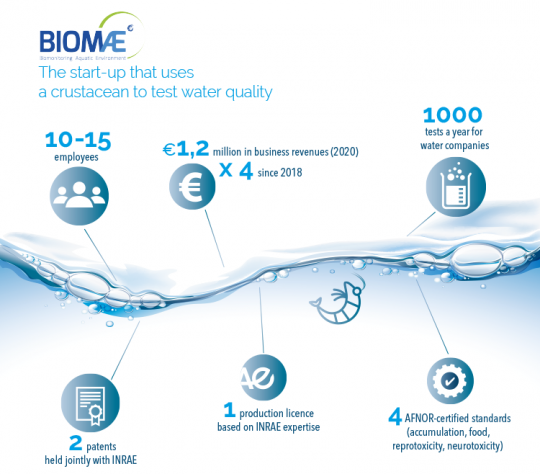 Do you have close ties with INRAE?

G. Jubeaux: Absolutely! We are an IRSTEA (now INRAE) spin-off. We currently provide AFNOR-standard integrative biotests that are the product of 10 years of research by INRAE. Until very recently Biomae was still hosted by IRSTEA and was able to benefit from the Institute’s offices and labs to support its work.

The other two Biomae founders and the joint inventors of in situ biotesting, Olivier Geffard and Arnaud Chaumont, have remained members of the INRAE Ecotoxicology team. They currently spend 20% of their time at Biomae, where they sit on the scientific board. Their complementary talents have allowed Biomae to draw on their comprehensive knowledge of aquatic ecotoxicology, crustacean ecophysiology, evolutionary biology and biostatistics.

Working with the INRAE research teams on the tools of tomorrow

We have excellent trusted third-party backing. Thanks to INRAE and our other partners we have been able to create a service offer that combines operational and scientific rigour. I should mention that we have participated in a number of research projects: we co-ordinated the BEGin project on active biomonitoring for water quality supported by Ademe through its Investment for the Future SME fund (2017-2018), and we are partners in the APPROve (integrated Approach to Propose PRoteomics for biOmonitoring: accumulation, fate and multi-markers) project led by the ANR (2018-2022).

What will be the market for this start-up? Where do you think it will go next?

G. Jubeaux: Currently, Biomae offers a standardised toolkit to players in the water sector that enables them to measure contamination levels and to assess the toxicity of any pollutants present in water. Our goal is to establish in situ monitoring of water and aquatic habitat quality but we would also like to carry out impact assessments, for example, testing the discharge from a stormwater attenuation basin, from a dam release, or even from pollution incidents.

Looking at Biomae’s story, there are two distinct chapters so far: first, the technology transfer which led to its creation, and then the period of expansion that followed the inclusion of our test for the bioaccumulation of micropollutants in the French regulatory framework. In the next chapter we plan to raise awareness of ecotoxicological processes and properties such as endocrine disruption and neurotoxicity, establishing their use in national and international reference methodologies. At the same time, we are continuing with our work on AFNOR toxicity test standardisation (three new standards will be published in 2020). We have moved our research base closer to our scud production sites on the Ain floodplain where we now have 300m2 of laboratory floorspace.

We are particularly involved in establishing a professional association for the water industry that could shape the French water market and help it to develop.

Building on our expertise to export Biomae

On an international level, several European countries (Belgium, Switzerland, Luxemburg) have expressed interest in our monitoring tools. Allowing myself to dream a little, I would hope that, in two or three years, we could roll out these tools to other European countries. So far, Biomae has managed to construct an analytical laboratory, to develop large-scale tools and to attract the interest of the public sector as well as private businesses. We must surely be capable of putting this know-how to work in duplicating our skills and knowledge in other countries.

When he discusses his career studying the ecological evolution of aquatic ecosystems, Scott McCairns, researcher at INRAE Brittany-Normandy, affirms that both luck, and timing, have been on his side. His recipe for success shines through his contagious enthusiasm: a curious scientific mind and a continual drive to expand his field of research.

What we don't know (about lakes) could harm us

PRESS RELEASE - While extreme weather events are increasing in intensity and frequency due to climate change, an international research team warned that lakes around the world could change dramatically, placing both ecosystem health and water quality at risk. They also noted the lack of information about the biological impact that strong storms have on lakes, particularly on phytoplankton, which are the base of food webs.