From 1995 to 1998, researchers from IRSTEA - which became INRAE on 1 January 2020 - implemented a vegetation monitoring mechanism in Provence, France. This system, which consisted of 325 clearly located and marked-out plots used for plant species inventories, allowed them to set up a database to calibrate a model that simulates changes in vegetation linked to variations in climate and soil conditions. This veritable forecasting tool monitors how Mediterranean flora adapts to climate change and, in that way, facilitates the work of managers and political decision-makers.

After the 2003-2007 period of severe drought and heatwaves, researchers undertook new fieldwork at the various sites in 2008, i.e. a decade after the initial measurements. This allowed them to check the accuracy of the model developed on plant behaviour relative to water availability and revealed variations of 5 to 25% in flora composition: those species with the highest water requirements had been replaced in part by more heat- and drought-resistant species. “These field observations support the theory that such differences, which are more noticeable in cool wet environments, are due to climate change. A new survey in 2019 will help fine-tune these initial conclusions, and long-term monitoring is planned. Other similar mechanisms have revealed that the great drought of 2015-2017 has led to a new type of large-scale dieback in the hottest and driest sections, untouched up to then, where conditions have become unsustainable even for the currently most resistant species," explained Michel Vennetier, an INRAE forest specialist.

Trees have two options for dealing with climate change, i.e. either they migrate through their seeds to extend their range beyond the boundaries of their normal territory towards more clement environmental conditions, or they adapt to the new environment. Such adaptation comes about, for example, by advancing the beginning of the spring-growth, flowering and fruit-ripening periods and increasing the depths of their roots while reducing tree height, leaf size and the diameter of sap-carrying vessels. When a species cannot migrate or adapt, the outcome is total or partial local extinction. "The Scots pine, in particular, has been very hard-hit: 50% of the stands of this species are experiencing dieback. The cork oak, white oak and fir tree are also in sharp decline in the Mediterranean. The holm oak and Aleppo pine, on the other hand, are doing well,” said Michel Vennetier. “Tree mortality is, however, a process that is difficult to understand in terms of how forests function, as generally several causes combine: heat, cold, a lack of water or nourishment, attacks by insects, fungus, diseases, etc., and sometimes, poor management."

Global change's impact on vegetation
Global change does have both beneficial and adverse effects, e.g. the increase of carbon-dioxide in the atmosphere may temporarily promote tree growth by facilitating photosynthesis and limiting water loss, but it also contributes to global warming. Warmer temperatures lengthen the growing season but may also increase the length and severity of summer droughts and the risks of frost in autumn and spring, with adverse effects. As water availability determines the composition of Mediterranean flora and its distribution, flora inevitably has to deal with longer periods of water stress.

Repeated fire and drought, a threat to Mediterranean forests

Fire is one of the greatest sources of disturbance to Mediterranean forest ecosystems, with 600,000 hectares burned each year (10,000 ha in France). Above and beyond the extent of land burned, scientists are focussing on the effects that fire has on plant population behaviour and the ecosystem's ability to regenerate. Thanks to the INRAE-coordinated IRISE programme, we now know that it is not a single fire that destroys a forest but repeated fires over too short a time span.

An increase in the frequency and length of periods of drought, such as those from 2003 to 2007 and then from 2015 to 2017, when combined with frequent fires leads to a collapse of the ecosystem's biological functions. Persistent drought after a fire slows down and even halts forest regeneration. In the same way, fire has a stronger impact on an area that has experienced prolonged drought. Four years of successive drought seems, then, to constitute a critical threshold in a forest’s resistance to fire. By intensifying the fire-drought combination, climate change weakens ecosystems. 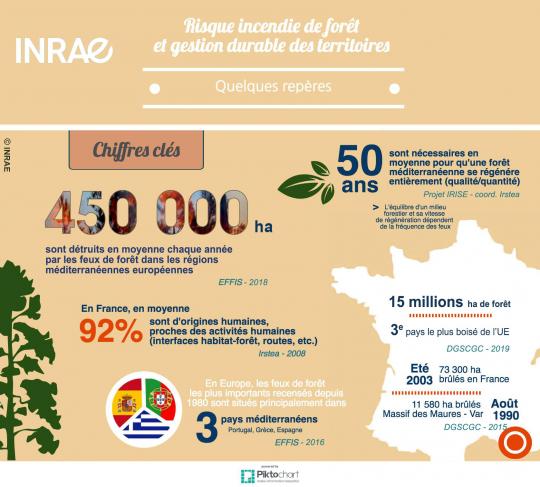 In areas subject to regular fires, the ground's biological activity is concentrated in the first few centimetres of soil, where the main part of its organic matter is located, at risk from combustion and erosion. By 15 to 25 years after a fire, most of the physical and chemical parameters of forest soil have regained their initial quantitative levels. But 50 years must pass in order to observe overall resilience in the ecosystem. Below that threshold, the ground's bacterial communities and fauna - vital components of the regeneration process - are less diversified and less active. It is not until 150 or 200 years without any fire that a high increase in carbon storage in the soil can be seen along with an enrichment of the vegetation's structure and composition.

A single fire can disrupt this regeneration process but does not compromise the forest's long-term regenerative capacity. That capacity will not be affected by another one or two fires over the 50-year period. But a fourth fire during that time can be fatal, as can two fires occurring very closely together (less than 10 years apart). At that "4th fire" threshold, species and communities that are vital for the ecosystem's functioning become increasingly scarce and the organic matter stock decreases in quantity and quality. Since fires can lead to large-scale carbon-dioxide emissions, the forest can no longer play its role as a carbon sink, which ultimately strengthens the greenhouse effect.

This knowledge offers the means to set Mediterranean forest management priorities: zones that have been subject to several recent fires and which one fire could irreversibly damage should be given priority over forests that have not burned in several decades, since the latter are more resilient. The far-too-rare older forests (more than 150 years old) must also be protected at all costs. Due to the important role that soil's organic matter storage plays in forest resilience, adding compost to re-establish forest soil fertility and environmental dynamics should be considered in those zones most weakened by fire or drought.

Ahmed Barkaoui is an engineer at the Bureau for Economic Theory and Applications (BETA) in Nancy - part of INRA’s Social Sciences, Agriculture and Food, Rural Development and Environment Division (SAE2). For more than 15 years now, this low-key mathematician/statistician, who is, however, an expert in his field, has focussed on developing economic models of the French forestry sector designed to anticipate and plan for changes and trends in that area.

With climate change, there will be significant changes to the forage production used to provide daily feed for cattle and sheep. What changes will farmers have to make on their farms to maintain an economically, environmentally and socially consistent and efficient system? The FARMATCH project has focused on preparing farmers by confronting them with virtual scenarios using computer simulations.