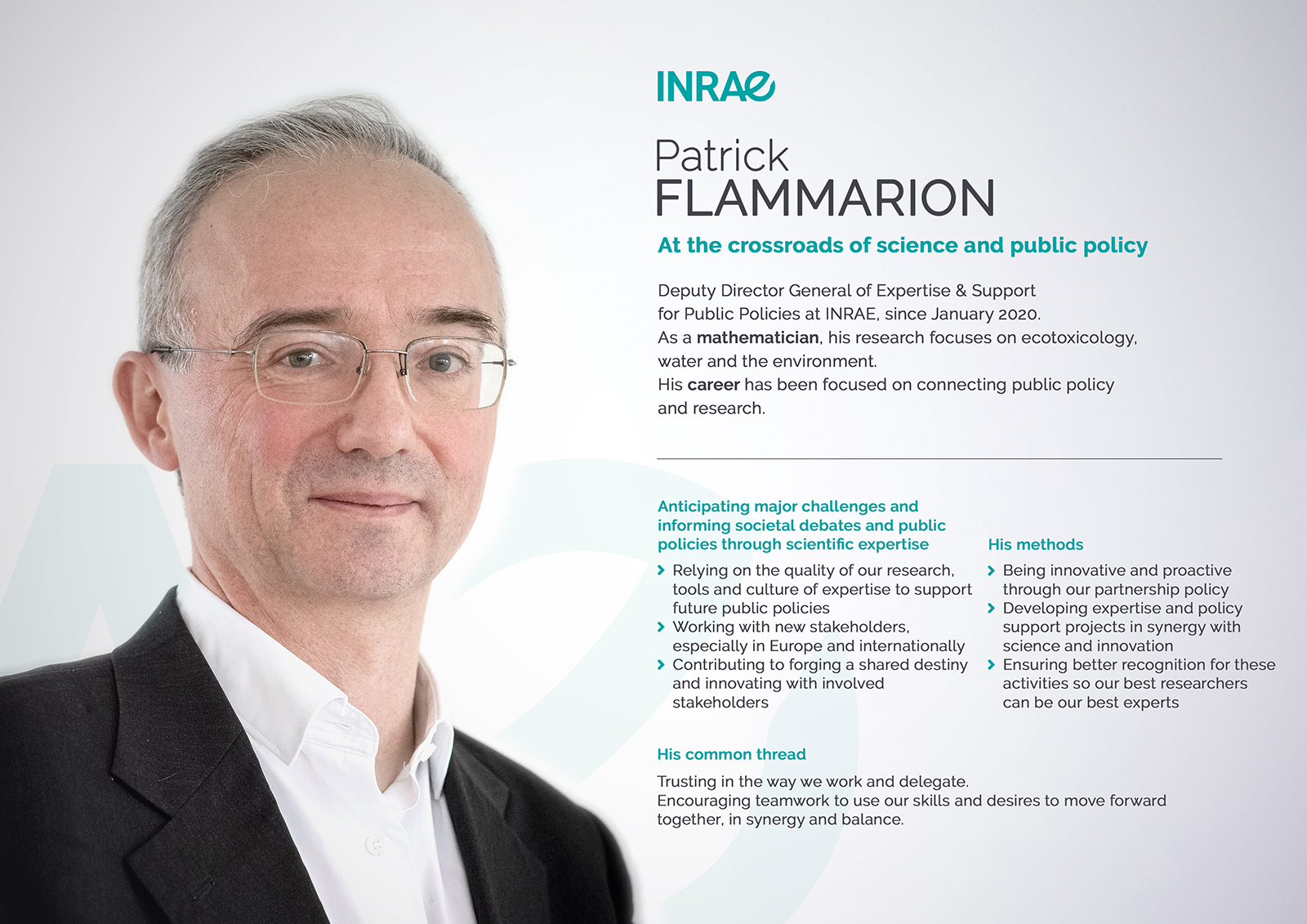 Through research, societal and public policy stakeholders can work together in synergy

Every day, the choices we make as a society generate new risks and test the planet’s limits. Agriculture, food and the environment all have a vital role to play in tackling these challenges. Public policies and decisions are also critical, whether at a regional level or on larger scales. “We can find solutions to adapt to the consequences of climate change and new ways to address the urgent Sustainable Development Goals promoted by the UN. We need to be more innovative and proactive so we can achieve the goals and take steps towards transitioning or transforming how we do things. Through research, societal and public policy stakeholders can work together in synergy,” says Patrick Flammarion. Since INRAE was created, Patrick has been at the helm of the General Directorate for Expertise and Support for Public Policies (DGDEAPP). His strong convictions, which have been moulded by his detailed knowledge of the field as well as the scope and potential of the Institute’s activities, are firmly anchored in INRAE’s ambitions for 2030.

The way the general directorate is set up is unique among research institutions. “We’re not the only ones providing expertise or public policy support, but we are unique in Europe because our activities cover the entire public policy life cycle: foresight, design, assessment and implementation support.” He explains that “what also sets us apart is that our activities are backed by excellent research and grounded in society’s needs, and supported by multiple partnerships involving scientists, economic players, public stakeholders and civil society. In return, our activities also provide precious insights to advance our research. There is a genuine research-innovation-expertise continuum.”

Regions and cities are opportune areas for interdisciplinary experiments

During his first year with INRAE, Patrick has been committed to meeting with public stakeholders to identify their needs and broaden and strengthen INRAE’s ties with them. For example, an agreement was signed with the French Ministry for the Ecological Transition. Along with his teams, he has also reached out to staff and spoken with all of the scientific management entities. The INRAE centres operate at an important scale: they have shown considerable enthusiasm for these activities and regional action is essential. “Regions and cities in France are opportune areas for interdisciplinary experiments, and they are ideal for implementing new approaches to expertise and public policy support. A good example is regional water management. The concurrent and constant evolution of resources, the climate and uses requires continuously adjusting public stakeholders’ objectives and our scientific knowledge,” Patrick explains.

Internally, a new framework is being developed to ensure these activities are more visible and promoted. They will be better recognised as a part of scientists’, engineers’ and technicians’ careers. Additionally, an internal call for projects has added further momentum to our expertise and support for public policies development in more innovative areas. These “fundamentals” will help us better position ourselves in Europe and internationally. A European foresight study on pesticides, launched in 2020, is a first step in this direction.

Throughout his career, Patrick has cultivated the connections between science, policy and society. “With my experience in research and public organisations leading specific projects on the environment and water, I’ve always worked hard to support the link between public policy and research so that the people I represent can work together. You have to strike a delicate balance between different worlds but it’s very exciting.”

Delving into research and environmental challenges through ecotoxicology

After receiving an engineering degree from Ecole Polytechnique with a specialisation in life sciences, followed by advanced studies at the French national school of rural engineering, water and forestry (ENGREF), Patrick entered the world of ecotoxicology 25 years ago. This field, which was “more an area of inquiry than an established field at the time”, draws on chemistry, biology, ecology, statistics and modelling. Not only was he able to use the skills he acquired during his studies, but he also found himself enticed by a deep conviction inspired by the field. “The chemical risks for human health and the environment seemed to be a critical issue to explore in order to address the questions that society was bound to have about long-term exposure to many different chemicals,” explains Patrick.

After completing his PhD in ecotoxicology in December 1997, he led various scientific projects and expertise studies at IRSTEA before receiving his accreditation to supervise research in 2001. In 2002, he managed the office of ecology and environmental risks at the French Ministry for the Environment. He was in charge of around 20 national research programmes, at a time when the French National Research Agency (ANR) did not yet exist. “These national research programmes helped direct multidisciplinary scientific communities towards priority areas of study by enabling dialogue between scientific programme advisory boards and steering committees of stakeholders, and especially public policymakers,” explains Patrick. For five years, he developed research and innovation in the areas of biodiversity; soil, water and air pollution; climate change, and environmental and health risks. It was an opportunity to apply research results to public policies and guide research towards environmental policy challenges.

In 2005, Patrick joined INRA as an advisor and Secretary General of the Management Board, where he oversaw INRA’s partnerships with the Ministries of Agriculture and the Environment. Three years later, he became the Deputy Director for Research, and then Director of Science and Technology at the National Office for Water and Aquatic Environments (ONEMA), now called the French Office for Biodiversity (OFB, previously AFB). “My job was to help create a new interface structure between science and public policy, and especially for water and aquatic environment issues, which brought me back to my first love as a researcher in aquatic ecotoxicology,” Patrick says.

Water at the European level

In 2013, Patrick took over as head of the Water Resources Scientific Division at IRSTEA and dove back into scientific management at AllEnvi, the French National Research Alliance for the Environment, to unite the scientific communities working in the field of water in France and Europe. “I led the creation of the strategic research and innovation agenda at the European level so that the Member States could achieve consensus on their water policies,” says Patrick. “It took a lot of listening and a constant search for balance. I was able to convince them to use foresight studies to truly shift their thinking instead of simply expressing needs that were barely extrapolated from reality.” In 2015, he was appointed President of the Strategic Steering Committee for the Environment at the French National Research Agency (ANR) and was tasked with drawing up a roadmap.

This merger is a scientific project in its own right

After being named the Deputy Director General for Research and Innovation at IRSTEA in 2017, he oversaw three scientific divisions (water, ecotechnologies and territories), with departments in charge of international development, public and private partnerships, evaluation and foresight studies. It was also in this role that he became involved in the merger between INRA and IRSTEA. “We saw that key synergies could be created between the two institutes’ respective areas of expertise and scientific challenges. This merger is a scientific project in its own right.”