What are “mating types”?

“Mating types” are self-incompatibility systems that promote outcrossing in plants, fungi and oomycetes. The gametes from two individuals-carrying a copy of each chromosome-only fuse into an egg or zygote if they are of opposite sexual types. How does this recognition take place in mating types? In potato blight, for example, phytol, a terpene common in plants, is modified and transformed into a hormone, which is then emitted into the environment. The opposite mating type individual perceives the signal, modifies the hormone and releases it to signal its presence to the other. Unlike plants and fungi, the genes involved in this process had not yet been identified in oomycetes. 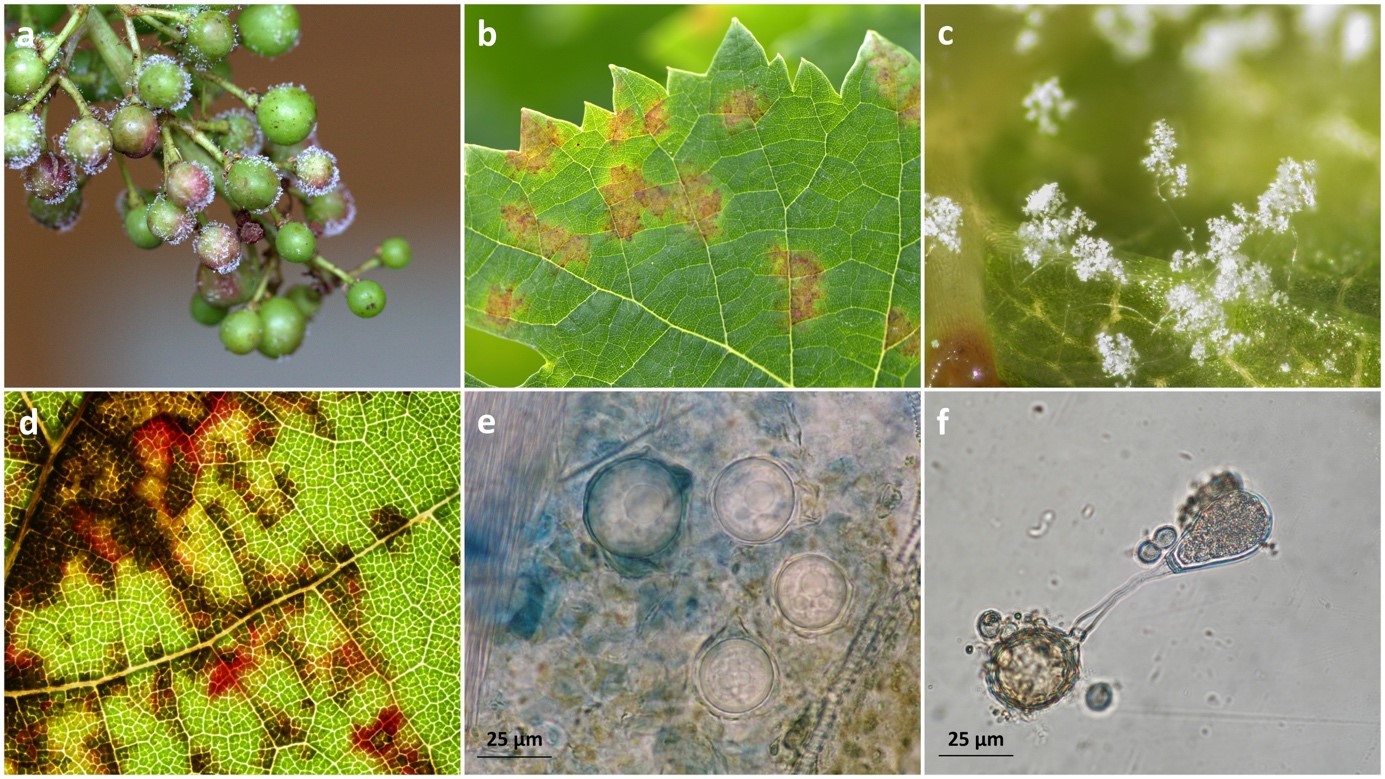 In their study, researchers from INRAE, the CNRS, and Paris Saclay University identified the locus[2] determining mating type in grapevine downy mildew. This is the first description ever of this locus in an oomycete. By associating genomic variations to mating types, identified by crossing a large number of individuals, researchers showed that one mating type (P1) was homozygous (Mat-a/Mat-a), whereas the other (P2) was heterozygous[3] (Mat-a/Mat-b). The mating type locus encompasses 40 genes, one of which could encode a hormone receptor.

A fundamental discovery, and prospects in the fight against downy mildew

These findings have crucial implications in understanding mating type evolution, since they reveal a unique determinism involving an asymmetry of heterozygosity similar to that of sex chromosomes (like the XY system in mammals). This system differs greatly from other mating type systems known in plants, algae, and fungi.

Downy mildew is one of the main diseases affecting grapevine, causing significant losses and requiring over ten fungicide treatments when conditions are favourable. As a result of this discovery, a new method to fight grapevine downy mildew can be envisaged, one that would focus on the sexual phase of the pathogen. Limiting the success of sexual reproduction could help reduce the intensity of epidemics the following year. The goal of the researchers responsible for this study is to develop a process to disrupt the sexual phase, for example, by saturating the environment with hormones specific to the recognition of mating types.

[1]  Unlike bacteria (prokaryotes), eukaryotes have a nucleus, which contains the DNA.

[2] Locus: precise location of a gene on a chromosome.

View the video: Germination of an oospore (“egg” originating from sexual reproduction) with its macrosporocyte containing mobile zoospores (asexual). The zoospores move using two flagella and their release will be the cause of the epidemic in spring.

A team of INRA scientists from Toulouse and Clermont Ferrand has developed a method that can identify the proteins responsible for the virulence of the parasite that causes downy mildew in sunflower. This disease can cause an almost total loss of yield in the event of a severe infestation. These findings have just been published in the journal Frontiers in Plant Science. This advance should facilitate the characterisation of genes for the resistance of sunflower to downy mildew.

PRESS RELEASE - INRA researchers, together with colleagues from the Institute of Vine & Wine Science (ISVV) of the University of Bordeaux, have published the first genome sequence of a grapevine rootstock. Their research culminated with the assembly and annotation of the American native Vitis riparia Gloire de Montpellier genome. Up until now, only the European variety Vitis vinifera had been sequenced. In most vineyards around the world, grapevine is grown grafted onto rootstocks, since they offer resistance to soil-dwelling pests—like Phylloxera—and improve its capacity to adapt to different environments. This high-quality sequence opens new avenues to identify genes of agronomic interest that do not exist in the European variety (disease and pest resistance, environmental adaptation) including some specific to roots. This sequence will also allow experts to envision new approaches to improve grapevines and their cultivation, which are highly threatened by pathogens, constrained growing conditions, and climate change. The results were published in the journal Scientific Data on 19 July 2019.

Nathalie Ollat is a research engineer at the Ecophysiology and Functional Genomics of the Vine joint research unit (EGFV) at INRA Bordeaux. Specialised for over 15 years in the study and improvement of grape vine rootstocks, she recently began analysing the impact of climate change on viticulture.