The oldest university in the western world, the University of Bologna (UniBo) is a major research institution in Italy and Europe boasting 11 Schools, 33 Departments and 87,000 students. Since forging its alliance with INRA (now INRAE) in 2015, UniBo has emerged as a major European partner for the Institute in their five priority areas for cooperation: food and nutrition, plant sciences, animal sciences, environment and ecosystems, and economics and society.

With nearly 200 co-authored publications in their fields of excellence for the period 2015-2021, the two research institutions have actively collaborated on numerous major projects (both completed and ongoing). The animal and plant sciences, agriculture and forestry, nutrition, and wastewater and waste recycling are central to this INRAE/UniBo collaboration. In the sphere of animal and human health, too, the two institutions have built a successful partnership working on microbiota.

The two research organisations have likewise been able to extend their working partnership to some of the major European projects driven by INRAE. The University of Bologna thus became one of the two dozen partners who signed the joint declaration of intent of the European Research Alliance towards a chemical pesticide-free agriculture in February 2020. UniBo has also joined E-Muse[1], the innovative training network co-ordinated by INRAE and launched in January 2021. Last, in the wider context of Italian and French involvement in the European PRIMA[2] partnership, established to address issues in the Mediterranean area relating to water management, agricultural systems and the agrifood sector, INRAE and UniBo are yet again putting their collaborative skills to good use on two research projects.

More generally, the two partners are of course colleagues in various European networks  - working together on food supply (FoodForce) and carbon neutral agriculture (ReSoil Foundation), for example -  and are fellow-members of global networks such as the International Advisory Council on Global Bioeconomy (IACGB).

Looking ahead, the partners are deploying their combined expertise to meet both European policy goals and the requirements of their respective scientific strategies in their response to the 2020 European Green Deal call for projects to support food transition. The DIET SHIFT [3] project, submitted in partnership with the University of Wageningen (NL), demonstrates this commitment.

This renewed agreement will facilitate the ongoing scientific dialogue between the institutions and will help them to respond to forthcoming calls for proposals from Horizon Europe, in particular those that concern the bioeconomy. 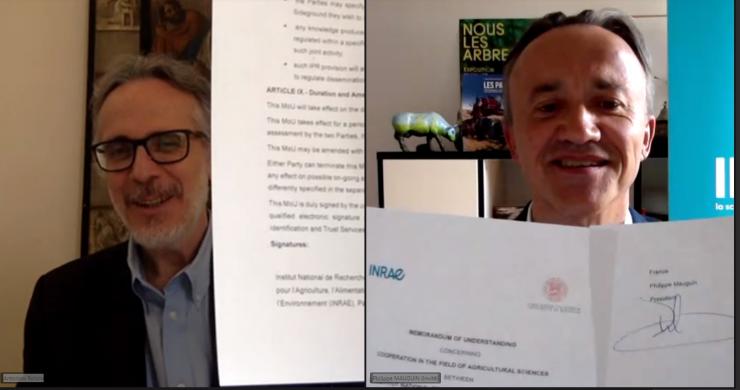 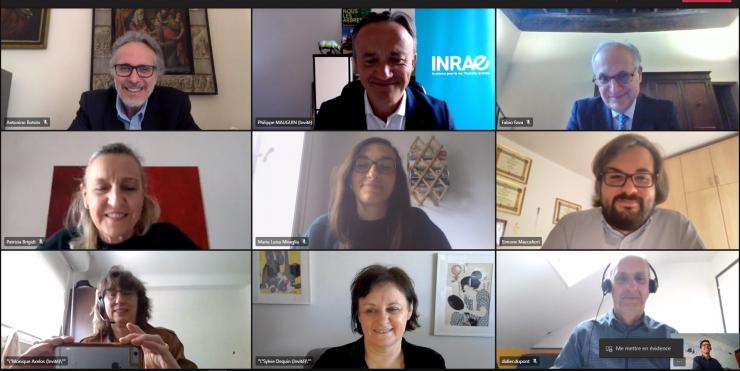 * Horizon 2020 has been Europe’s flagship funding programme for research and development in Europe. With resources of 79 billion euros and a strong focus on innovation, H2020 combines all the Research and Development funding instruments made available by the European Commission, its agencies and its public-private partnerships.

[1] Overseen by the SayFood Joint Research Unit, the E-Muse project (Complex microbial Ecosystems MUltiScale modElling: mechanistic and data driven approaches integration) is working to establish an innovative training programme to develop the skills of researchers with multidisciplinary talents in mathematics, bioinformatics and biology to design and use innovative multiscale modelling methodologies for the dairy industry. https://www.itn-emuse.com/

[2] Partnership for Research and Innovation in the Mediterranean Area

[3] Outcome will be known in May 2021. Coordinated by INRAE and WUR

In the context of a Qualiment® revitalisation project, a process for the fermentation of pea proteins has demonstrated its relevance to enhancing the sensory qualities linked to the use of plant proteins. Thanks to carefully selected microbial cocktails, it has been possible to formulate plant-based foods such as “yoghurts” and “cheese”.

PRESSE RELEASE - To support INRA’s collaboration in India on global issues such as sustainable development, environmental protection and food security, Girish Sohani, President of BAIF Development Research Foundation, India’s largest NGO in the field of agriculture and long-standing partner of INRA, visited INRA on 21 and 22 March and met Philippe Mauguin, President of INRA.