Producing scientific knowledge and valuing it in different forms (innovation, expertise, foresight, etc.) are two complementary missions of INRAE that require the development of multiple and varied partnerships. With a proactive policy of collaboration with its academic, socio-economic and institutional partners at regional, national and international levels, the Clermont-Auvergne-Rhône-Alpes Centre is particularly involved in this area. These collaborations are carried out contractually in the Centre’s 5 main domains of expertise, and can be based on its specific analytical and experimental devices. They involve four main types of partner: the French government (via French National Research Agency funds in particular), the European Union, socio-economic players and local authorities. In 2020, the contractual resources from these partnerships amounted to 11 million euros in total. Their origin is diverse, but mostly public. For example, INRAE and its partners benefit from infrastructures and equipment financed by French and European actors.

300 contracts were under management in 2020, including 35 French National Research Agency and 26 European contracts. The activity is also represented in a portfolio of patents (29) and licences (35).

The partnership is also involved in the field of science-society collaboration, whether in the form of participatory science or for the diffusion of scientific culture. Making society aware of what we do, why we do it and how we do it is part of the Centre's communication policy. More generally, it is part of the Institute's involvement in the science-society debate.

Agreements with academic research organisations in the region

INRAE's research is carried out in close collaboration with our academic partners (universities, research organisations, schools) with whom we share our units (Joint Research Units, Contract Units). They are included in partnership agreements.

Agreements aim to promote collaborations and partnerships by implementing an active and strategic site policy in terms of research and innovation, by coordinating transfer and innovation policies on the territory, and by jointly developing scientific culture and dialogue with society.  Partnership between the various research teams enables excellent research, particularly through joint involvement in the site’s major strategic projects.

The socio-economic partnership is diversified

A recognised expertise and foresight activity

Since 2000, our Centre is committed to a quality approach in order to contribute to scientific excellence, recognised professionalism, attractiveness and creativity in research and experimental units. Environmental management is becoming an important part of the units and experimental platforms quality system, most of which have been awarded national labels.

Outreach of the Centre

In 2019, the Centre's researchers published around 450 articles in peer-reviewed journals appearing in 240 different journals (source web of science). 20% of publications are in 8 major international journals and 55.40% are open access. In 48% of the cases, the publication was made with at least one collaborator from a foreign country, of which 30.40% with members of the European Union. The collaborations were carried out with 67 different countries. 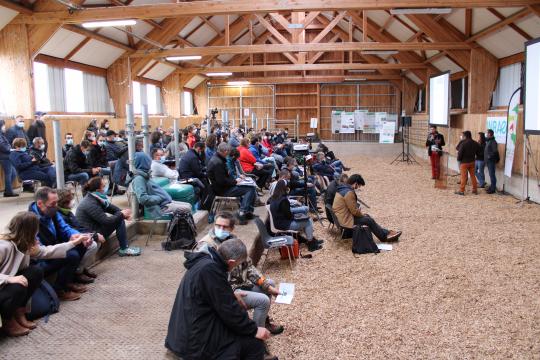 Organisation of national and international events

Each year, about ten major scientific or partnership events are organised or co-organised by our researchers and research units: days in partnership with academic, territorial or agricultural partners, seminars to launch or close major research projects, national and international symposiums. Among these, first rank major international symposiums make it possible to render the agronomic and environmental research of our centre visible at the international and territorial level.

The Centre continues its involvement with young people. Our technicians, engineers and researchers are involved in various schemes, in particular in conjunction with the education authority, to give more meaning and concrete objectives to student learning (support for schools, colleges and high schools, teachers, Accro'Sciences, Exposcience, job fairs, etc.). It is also done through major events dedicated to the popularisation of science (science fairs, open days, exhibitions, "scientific culture" events in the regions). Scientific culture is most often developed in association with our main partners such as the UCA, CAP 20-25 or the Astusciences association, with whom we co-construct many events (Courts of Science, Montagne et science, etc.).

Our Centre is an active and committed contributor to the dissemination of scientific culture throughout the country. This is evidenced, for example, by the "Clermont, UNESCO learning city" scheme, which includes Clermont-Ferrand in the worldwide network of "learning cities", in which we are heavily involved. It is an educational, scientific and cultural initiative, based on a genuine commitment to mobilise all available forces to make current knowledge accessible to citizens. In the professional world of livestock farming, another example would be the "grass days", organised each year with the Chambers of Agriculture on the innovations and advantages of "grass-fed livestock farming". Another original initiative is the regular organisation of "science bars", a multi-partner event co-organised by INRAE, which is a fun and original initiative to discuss and debate major societal issues. The researchers work is also reflected in the daily lives of citizens, for example in the field of nutrition and health, with the development of applications to better manage daily life, or information and prevention campaigns against ticks and the diseases they carry.