Thomas Opitz, a researcher with a basketball player’s build, welcomes us with a smile at the end of a thesis committee meeting. He is discreet and reserved, but quickly opens up to tell us more about what he studies: the random phenomena that drive climate, environmental and ecological risks.

For Thomas, there are always opportunities if there are data to exploit. The young researcher, who specializes in spatial statistics, spends his days working to explain natural phenomena that often astound us with their intense and brutal impacts: forest fires, landslides, storms, heatwaves, and more generally, environmental and agroecological risks. “I work on rare and high-impact phenomena using spatio-temporal approaches,” he says. “I study the past to better understand these phenomena, and the future to better predict and manage them. I also take into account that they could be amplified by climate change.” Does it sometimes feel like science fiction? Not at all – even if he does love to read sci-fi novels in his spare time! In the lab, his tools are statistical analyses based on field observations, and especially stochastic models, which are able to integrate uncertainty due to random behaviour. For Thomas, these models are like generic and modular toolboxes that he develops and draws from to study very different areas of application, ranging from forest fires to bees, crop pests and wolves.

This type of interdisciplinary work is a quite unique selling point

It was during his studies in Germany in mathematics with financial and actuarial applications that Thomas began to learn about such tools. He then completed a Master’s degree in Biostatistics at the University of Montpellier, driven by the many applications in biology and medicine. His thesis project gave him a chance to deploy his models on climate data and start developing rewarding international collaborations. These numerous experiences led to his being hired at INRAE in 2014. He joined the Biostatistics and Spatial Processes Unit in Avignon, which proposes novel statistical models to conduct interdisciplinary research with ecologists, agronomists, pathologists, epidemiologists and climatologists and other specialists. Demand from researchers from other disciplines for this type of approach is continually rising and the unit is practically bursting at the seams in its building! “This type of interdisciplinary work is a quite unique selling point,” says Thomas. The expertise of specialists in equations and theorems, in numerical implementation and in ecological, biological and physical mechanisms all come together on these projects. Their collaborative efforts have resulted in so-called mechanistic-statistical models that have been extremely valuable. For example, the unit has recently been very active through its approaches to COVID-19 epidemiology.

Being useful to society

It is Thomas’ work focusing on the combination of climate, environmental and ecological phenomena involved in forest fires that has given rise to a first major application at INRAE. He is studying the role of factors that promote forest fire risk: climate, human activities such as tourism and transport, and the type and structure of vegetation cover. His very unique models allow him to leverage “big”, irregular and challenging datasets. Available data are often characterized by both gaps and repetitions: for example, a galloping profusion of spatial data at high resolution from remote sensing but with only relatively short observation periods when it comes to extremes. “Such models allow us to predict the phenomena that will have strong impacts. More specifically, models can predict their probability of occurrence and their spatial extent and temporal duration, for locations and times that have not yet been observed,” Thomas explains. Another concern deals with the wide disparities between data collected according to scientific protocols and information gleaned through participatory science, where certain situations may be over-represented in the latter. This is the case, for example, in a project where Thomas is attempting to shed light on the effect of trapping Asian hornets (a relentless predator of bees) on the number of nests they construct. While data may seem very hard to exploit, Thomas calibrates his models to eliminate many different biases and take into account the remaining uncertainties, thus obtaining reliable knowledge from both small and big data(*).

The practical applications of his work become clearer when looking at maps and other visual illustrations produced with his models. For instance, maps created through collaboration with researchers in Italy and at the King Abdullah University of Science and Technology (KAUST – Saudi Arabia) help explain Italian landslide inventories. The short video animations used to visualize variations in the populations of pests and their predators according to landscape configuration (hedges, grassy field margins etc.) are another example. The aim is to “aid scientists, stakeholders and managers on the ground”, such as by eliminating the need for pesticides by planning orchards so as to favour biological control, or to support firefighters battling forest fires. “Which reminds me,” Thomas says, “Would the famous bridge of Avignon, immortalized in song, have withstood the floods of the Rhône if its builders had known how to anticipate the floods’ future magnitudes?” These are the types of questions that Thomas’ work can now address by putting forward various scenarios of extreme weather events, both realistic and with magnitudes that have never before been observed. Identifying and quantifying risks assists decision-making and helps identify the conditions for greater resilience. 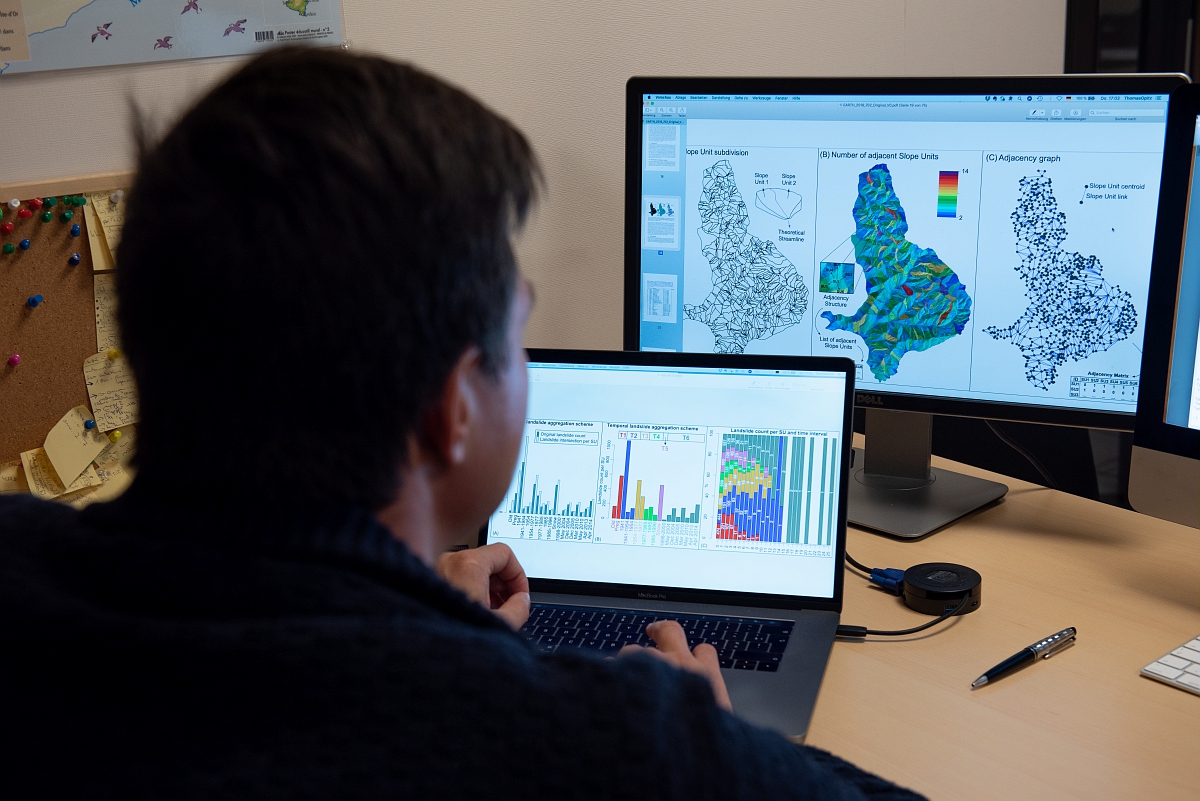 Knowing that “misfortunes never come alone,” says Thomas, “we have to move beyond current approaches that still too often study each risk separately. For example, heatwaves often accompany droughts that set the stage for crop losses and wildfires that release greenhouse gases that, in turn, can exacerbate extreme weather events.” The young scientist is now turning his attention towards research on this type of cascading risks, which INRAE has identified as a strategic research topic. To make better use of big data (beyond a few hundred thousand data points, part of them is discarded by state-of-the-art modelling approaches), he is also catching up on artificial intelligence, which he wants to hybridize with his models to better transform these large volumes of data into useful knowledge.

What INRAE means to you

INRAE is a great environment for conducting fundamental research and exploring practical applications that affect our societies as a whole. The theoretical side of research means Thomas has a lot of freedom in his work and can be creative. Brainstorming takes time. His work also calls for a lot of discussion and collaboration – with colleagues at his lab and at INRAE Avignon, at seminars and conferences, and by videoconference at the national and international levels.

Thomas’ work at INRAE aligns with his values: the freedom of research, a spirit of collaboration and a return to his roots. Indeed, INRAE’s research topics also connect him to his parents’ farm in Bavaria. “It’s motivating to work at an institute whose innovations relieve the often very difficult working conditions in agriculture”.

How it feels to be honoured

This longtime Bayern Munich supporter said it was rare to give the “Ballon d’Or” to a defender rather than a striker. He’s still amazed that it is the community of statisticians who provide the tools for research in applied fields that is being honoured! 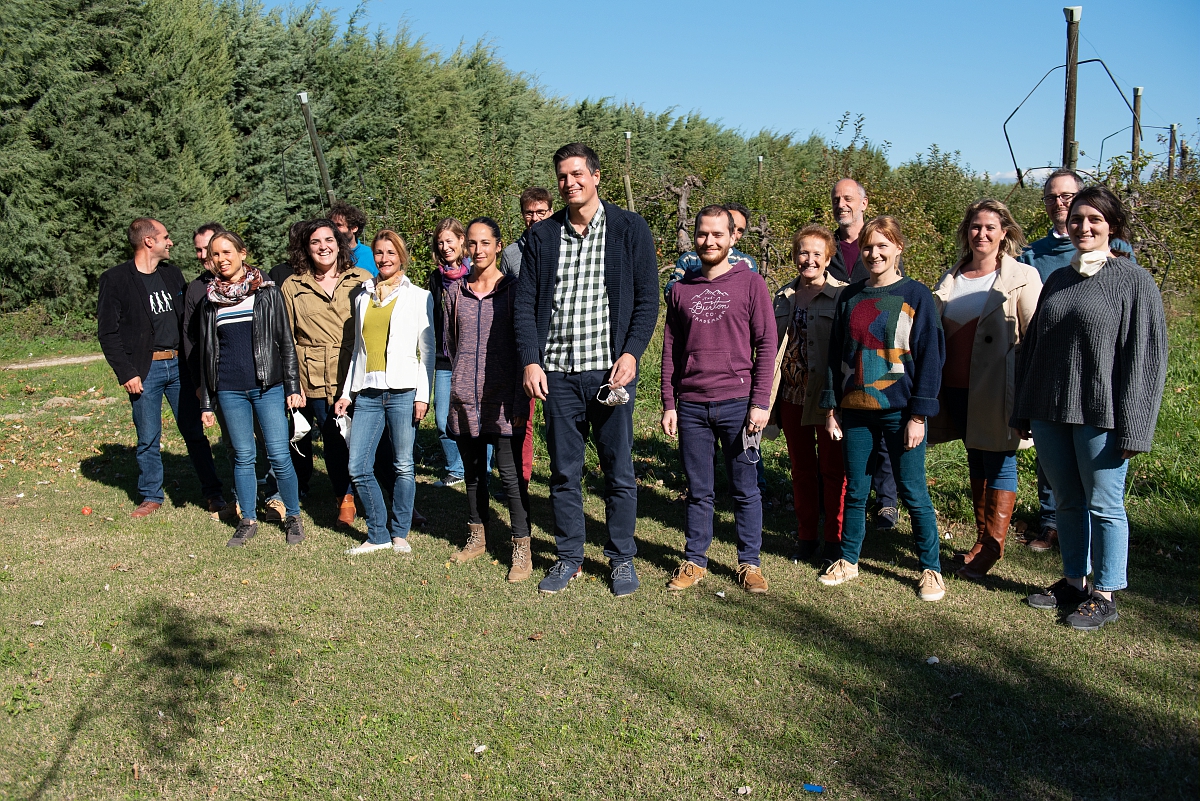 PRESS RELEASE - By the end of March, an INRAE team had already produced the first infection fatality ratio calculation for COVID-19 outside China. They identified a fatality rate of 0.5% based on French hospital data, adjusted to 0.8% when nursing home data were included. Their results were confirmed at the end of April by work carried out at the Pasteur Institute in Paris and by a New York study. The team’s analysis was published on 8 May 2020 in MDPI Biology.

Anticipating the future risks of fungal disease development in crops

Faced with climate change, farmers are adapting and modifying their agricultural practices. The CLIF project has focused on the consequences of changes in temperature and rainfall on fungal diseases to ensure that these adjustments take into account climate-driven diseases. The objective is better prediction, so farmers can react quicker and better.

REPORT - Rising temperatures and droughts will affect livestock and the quantity and quality of crops. In this report, we look at feedback from 10 projects, revealing the need to progressively adapt or embark upon more profound changes.