My environment at INRAE is exceptional due to its transdisciplinary nature

"My environment at INRAE is exceptional due to its transdisciplinary nature - physiologists, pathologists, geneticists, bioinformaticians. The skills of the entire group are needed to grapple with the issue of apple breeding! For producers, apples need to be easy to grow with regularly high yields, but they must also store well for distributors and meet the taste requirements of consumers, who have the final say and drive the market,"  according to François Laurens. A forbidden fruit for Adam and Eve, Dionysus' gift to the goddess Aphrodite, the globe-shaped apple has conquered the world. It is also the most widely eaten fruit in France in terms of volume. "A big, richly coloured apple has long been the model consumers prefer," explained François. So the world market is dominated by the yellow Golden, red Gala and green Granny Smith. However, since the 1950s, INRAE researchers have been striving to add a new quality: resistance to the main disease affecting apples, i.e. scab. Treatments for this fungus do, in fact, account for nearly half of the approximately 35 phytosanitary treatments used on apples each year. Breeding criteria need to evolve - a fact that is beginning to be taken into consideration by consumers and public authorities through pesticide reduction plans, particularly in Europe.

Trailblazing a new way of working with professionals

Taking up the mantle of his predecessor Yves Lespinasse, François Laurens launched the Ariane apple in the 2000s and then developed a new variety called Story ®Inored (1), with the first trees planted in 2012.

With this organisational innovation, we are five years ahead compared to Ariane

Story ®Inored is larger than its cousin Ariane but has a similar scab-resistance gene that reduces treatments by 30, or even 40, percent. However, the story of this apple differs from Ariane's because François understood the key role that professionals play in variety recognition. While Ariane's development took place entirely at INRAE, from sowing the first seeds to orchard trials, the scenario was different for Story ®Inored. INRAE prepared the progenitors, carried out the initial cross-breeding and the first greenhouse trials to eliminate scab-susceptible plants, and then the selected trees were evaluated directly by nurseries in several regions, allowing better ownership of the variety by the profession. A proponent of the force of unity, François encouraged the creation of a company (2) comprising about 20 French nursery professionals, which has become INRAE's special partner for apple improvement. "With this organisational innovation, we are five years ahead compared to Ariane. "The year-long sabbatical François spent in New Zealand in 1999 undoubtedly contributed to his determination to involve professionals very early on in variety trials: "in a very pragmatic way, New Zealand breeders are at the heart of the research system, which includes commercial aspects. When trials are completed, the variety is ready to be launched on the market." François is also in permanent contact with fruit sector professionals through a scientific interest group (GIS in French) that he has been co-facilitating since 2015. 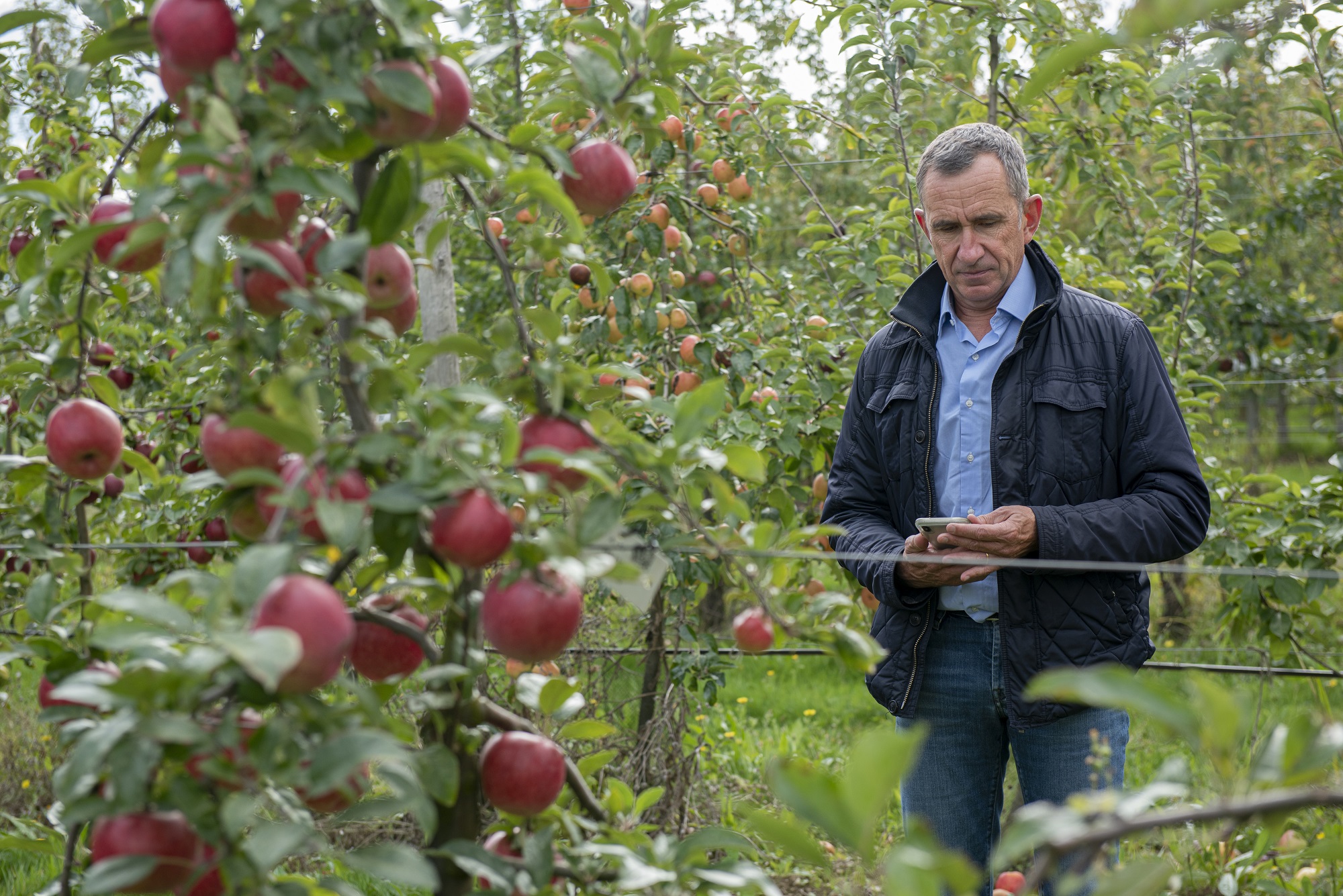 The fruit tree improvement process is very long: it took 25 years to get the Ariane apple and 15-20 years for the Story ®Inored. That is why crossbreeding to improve varieties is an ongoing process. In terms of scab resistance, research continues since this fungus has always been able to adapt to get around the resistance genes used. Other regions of the genome that carry different resistance mechanisms need to be included. As early as 2011, François, a true visionary, initiated local, national and European collaborative efforts with a view to developing tools and methods to enhance the effectiveness of breeding programmes and achieve more long-lasting resistance by combining several complementary sources of resistance. That is how he came to coordinate two programs that bring together a large range of public and private partners.

Thanks to his solid international network, François has lost count of the times he has worked abroad. He is currently coordinating three major European or international projects involving the transfer of more environmentally friendly crop practices to producers, improvement of variety evaluation procedures, and more accurate predictions about how varieties will behave in very different environments and against the backdrop of rapidly changing climate conditions. François always keeps in mind the applied aspect of basic research in his projects. In recognition of his career as an innovative and enterprising researcher, François was asked to organise the International Horticulture Congress, which takes place every four years, as ambassador of the City of Angers and, more broadly, of the relevant French scientific community. This approach was successful, since in 2022, the city will host more than 3000 attendees at this major scientific event. President of the organising committee, François has enthusiastically accepted the new challenge - a fresh scientific and human adventure combining research, skills and knowledge transfer, and training. The INRAE Awards? "Obviously, I was not expecting this and it took me some time to take in the news and announce it to the team. Even though the award has been issued in my name, I would like to share this recognition with my predecessors, my colleagues on the team, and the many researchers at the IRHS, INRAE and European research institutes," noted François Laurens.

And for the future?

In keeping with his principles of collaboration rather than competition, over the longer term François Laurens would like to establish a European consortium to share common breeding tools and programmes instead of having each country develop its own programmes as is currently the case. "We could begin with programmes that are less ambitious than the apple - for example, the pear, whose market is less extensive, or rootstock. We would gain in efficiency and resources, like every time with we work together rather than in competition with one another," concluded François Laurens.