The provisional death toll for the violent storms which hit part of Central Europe in the first half of July reached over 175 on Sunday 18 July. Germany has suffered the greatest losses, with over 150 deaths, followed by Belgium where dozens have died. The search continues for those still not accounted for, meaning that the final toll can be expected to be even greater.

How could this natural hazard have led to so many deaths when there had been ample warning of its arrival? What part was played in the disaster by the increasingly unpredictable weather patterns that accompany climate change? And how can we best prepare for this sort of event? We shall do our best to offer some answers to these questions.

1. What caused the flash floods in Germany, Belgium, Luxemburg and the Netherlands?

They happened because of the very extreme rainfall in these regions on 13 and 14 July. For example, the Deutsche Wetterdienst (DWD, the German meteorological service), recorded 154mm of rain in Cologne on 14 July, which is the equivalent of 154 litres of water falling on every square metre of ground! It was a deluge in the true sense of the word and the vast quantities of water meant that it was unable to soak into the ground, flowing instead over the surface of the land and running directly into rivers and streams.

The whole situation was exacerbated by the fact that 13 July had already been a day of particularly heavy rain, leaving the ground saturated with the rainfall of the previous days.

As for the weather itself, this sort of high rainfall event is relatively common in central Europe but the duration of this one was exceptional.

Such events occur when an isolated pocket of cold air – called a ‘cold drop’ by meteorologists* [*translator’s note : borrowing the popular and evocative Spanish name for these phenomena which are common in the Mediterranean]  – stalls naturally and settles over an extensive area. When this happens it can lead to very high rainfall accumulations within this defined area as the high volumes of water vapour contained in the surrounding warm air encounter the cold air of the depression and condense, falling as heavy rain in large quantities.

Nearly 130 dead and many more missing in the devastating floods that have swept Germany and Belgium (France 24, 17 July 2021).

2. Why are such serious floods happening during the summer?

From a French perspective, the striking thing about these floods – other than the shocking loss of human life – is the time of year.  We tend to see flooding as a winter event (such as the extensive January floods in the north of France in 1910), or we may possibly associate it with autumn in the Mediterranean.

But before bemoaning the disappearance of proper seasons, we should cast our eyes a little further afield, at which point we will discover that serious flooding in central Europe does indeed generally occur in summer, examples being the major floods on the Elbe in June 2013, the Danube in June 1965 and June 2013, and the Oder in 1997. In the Ahr valley which has been hit particularly hard by the floods of the past few days, the earlier floods that serve as reference points happened in July 1804, June 1910 and June 2016.

The twentieth-century French hydrologist Maurice Pardé considered these floods to form a distinct category, that of ‘central European-type floods’, which was characterised by the sort of ‘cold drop’ events witnessed over recent days.

3. Did climate change play a part in what happened?

The events of the past few days can be described as ‘classic’ in terms of both weather and hydrology. So at first sight there is no reason to bring climate change into the mix.

That said, what we can and should note, is that the rainfall intensities and volumes recorded were, properly speaking, ‘extra-ordinary’.

This development bears out the predictions of meteorologists on the consequences of a rise in global temperatures. Using the Clausius Clapeyron relation to express the relationship between the temperature of the atmosphere and the maximum quantity of water vapour it can contain, we can calculate that each additional degree Celsius will increase the total vapour content of the atmosphere by 7%. This increase in turn carries the threat of increased torrential downpours.

Other recent research on flooding provides further insights: in an article published in Nature in July 2020, Professor Günther Blöschl (Technical University of Vienna) demonstrated that, while the floods we are currently experiencing are not without precedent in terms of their numbers, this is the only point in European history where frequent flooding has been accompanied by high temperatures.

Indeed, looking at the other relatively ‘flood-rich’ periods experienced by Europe in the past (1560-1580, 1760-1800 and 1840-1870), we can see that all of them were colder than average, whereas the recent period is remarkable for temperatures that are well above the long-term average.

4. Had this extreme weather been predicted?

This is probably the most notable aspect of this July 2021 event for experts. The exceptional rainfall in West Germany and Belgium had been forecast as early as 12 July. Indeed, the European Centre for Medium-Range Weather Forecasts (ECMWF) had announced that there was a very strong likelihood of exceptional rainfall and had issued a warning which was sent to the German weather service (DWD).

The forecast was equally unusual in that it was accompanied by particularly high confidence levels.

What makes us say this? A consequence of the difficulty of the task of modelling the behaviour of the atmosphere is that our weather forecasts are ‘probabilistic’, based on what are known as ‘ensemble forecasts’. Several dozen predictions are generated simultaneously, each with slightly different starting conditions for the calculation. The degrees of similarity or difference in the outcomes make it possible to estimate the degree of certainty of a forecast.

By Monday 12 July, more than half the modelled scenarios suggested that extreme rainfall was possible. This degree of agreement is a rare occurrence and it will certainly have attracted the attention of forecasters in Germany. This then begs the question: did the warning message (and, above all, the information on the exceptional character of the expected rainfall) properly reach local decision makers? The question is a critical one because it is not enough to provide warnings to people, they must also be able to reach shelter and local authorities must be able to activate their preparation and response protocols. In Germany, making sure that warnings were properly communicated and that rescue services were prepared was a local responsibility. 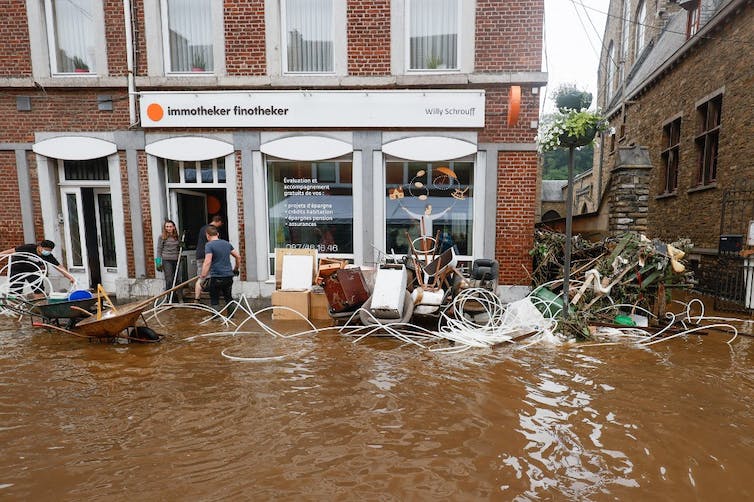 5. And should we be feeling worried here in France?

The scale of the current flooding in eastern France has been considerably smaller than that in Germany, despite the fact that new records have been set near the Belgium border. These floods were for the most part clearly forecast by the French flood warning service (SPC).

The vigicrues.gouv.fr website gave several days’ warning of the likelihood of flooding, although for small catchments the upper ranges of peak levels could be modelled only 24 hours beforehand – as it transpired, the levels recorded were at the top of the range provided by the ensemble forecast.

6. Can exceptional flooding be prevented?

Nothing can hold back intense rainfall. Once the rain has fallen, though, the storage of water to reduce flood peaks is a matter of engineering and of money.

The construction of dams or dykes to reduce peak flows on every minor river is clearly not practicable, so in these catchments we must be prepared to rely on a combination of flood warning systems and prevention and mitigation measures, such as legislating against new development on flood plains, taking steps to reduce the vulnerability of existing buildings at risk of flooding, and improving the provision of information to the public on actions to take during a flood.

On larger rivers, upstream of large towns and cities, it is possible to attenuate the severity of floods by building storage dams and dykes. These solutions cost money and they take up space, so it is important to weigh up the costs and benefits of their construction.

The spatial planning system, particularly in the form of restrictions on development in flood zones, offers a ‘common sense’ solution, but its efficacy comes up against individual interests.

As for what are known as ‘soft engineering’ measures (e.g. hedge planting, buffer strips), advocated by those seeking nature-based solutions, these are not effective for the sort of major flooding brought about by the exceptional rainfall seen in Germany over the past few days.

7. How should we prepare for this sort of event?

As we have seen, it is not enough to be able to predict exceptional flooding, not even with several days’ warning. Given the uncertainty that will always be associated with flood and weather forecasts, our chief need is to create a society that is genuinely risk-ready so that we can respond quickly to events outside the experience of the public.

We know it is possible to maintain a state of readiness to respond in a population where hazards occur frequently (earthquakes in Japan, for example). However, the task of preparing for flood events that are truly exceptional would appear a more challenging one.

It would therefore seem imperative for us to continue to work in a number of areas. We can improve our forecasting systems, how we respond to forecasts and how we communicate in an emergency. And, once the immediate crisis has passed, we have to continue our work to safeguard flood plains.

This article first appeared in The Conversation under a Creative Commons licence. Read the original article (in French), published on 18 July 2021.

Charles Perrinengineer in agriculture and environmentHydrosystems and Bioprocesses, Resources, Risks, and Restoration (HYCAR)

Maria-Helena Ramos, a hydrologist and researcher at INRAE (HYCAR Unit), is one of twelve scientists who sit on the international Scientific Steering Committee of the World Weather Research Programme (WWRP). She was nominated on 13 October 2020 to serve a 4-year renewable term.

Climate and environmental changes, modelling, risks, new societal challenges… using a broad consultation process, the international scientific community identified the 23 most important unsolved problems in the field of hydrobiology. Interview with Vazken Andréassian, director of the Research Unit on Hydrosystems and Bioprocesses, Resources, Risks, and Restoration (HYCAR) of the INRAE research centre of Île-de-France - Jouy-en-Josas-Antony who participated in this community consultation.

From the moment he started studying informatics, Patrick Taillandier's interest in research has grown unceasingly. He has worked in such diverse places as Australia, Vietnam, Lyon, Rouen, and Toulouse, cultivating an expertise in modelling complex systems, which comes in handy for managing risks such as floods, fires, and epidemics.