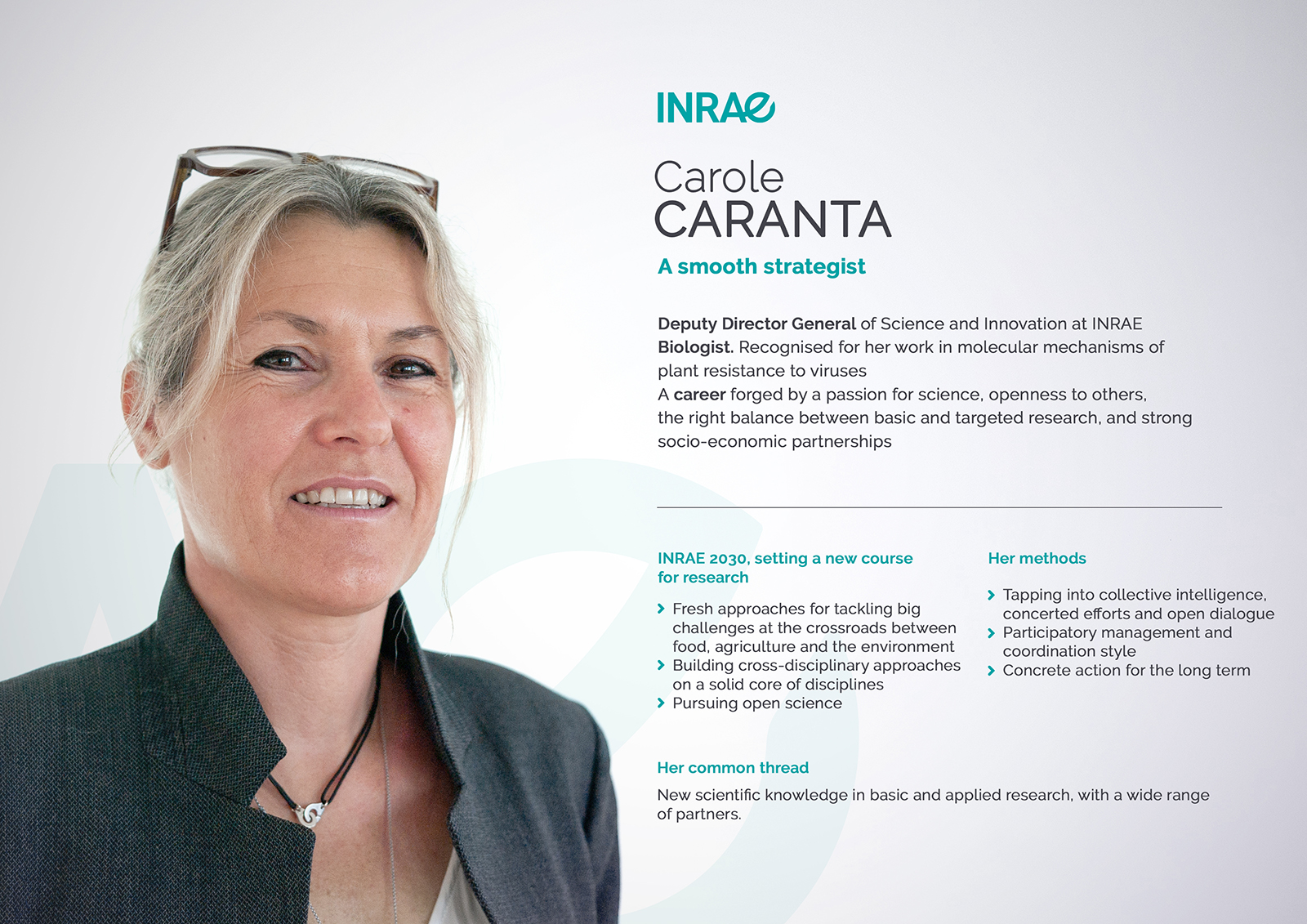 2021, INRAE came into being a year ago and it has launched its strategy for 2030. For Carole, it is also when her new term began at INRAE as Deputy Director General of Science and Innovation. Having already served as Associate Deputy Director General of Science and Innovation since January 2020, she was already “in the field”, rolling out the INRAE2030 strategic plan. At the close of four days of presentations and exchange with division heads to discuss the INRAE2030 strategic plan, she expressed regret that the health crisis is hindering direct contact in real time, without however slowing down progress. Carole is keen to keep the lines of communication open with all levels of the INRAE organisational matrix: research units, divisions, scientific directors and centres. Committed to team work, tapping into collective intelligence, and fostering mutually respectful exchange and dialogue, Carole intends to adopt a participatory management and coordination style through concrete action that is followed through and monitored over time.

“It’s about doing everything to foster and support the new directions research is taking”, says Carole. The challenges that INRAE is taking on at the crossroads of food, agriculture and the environment require a fresh approach to break down complex issues, tapping into the strengths within disciplines but also going a step further and adopting a cross-disciplinary approach. This is familiar ground for Carole: in 2020 she coordinated the finalisation of six Institute-wide brainstorming workshops to anticipate research needs and implement second-generation metaprogrammes designed to step up a cross-displinary approach and create new research communities. Several other projects are also following suit, she explains: continuing to pursue an open science and open data approach, services and competitiveness of research infrastructures and e-infrastructures, but also research with partners with a range of players, open innovation and stronger ties with universities and European and international partnerships.  “The social and environmental responsibility aspect of our research practices is also crucial to how we take on scientific issues linked to sustainable development”, explains Carole.

We take a look back at her career path, from the lab to strategic scientific projects at the interface of innovation and partnerships…

Bitten by the research bug

Daring to be passionate and staying open to possibility

Carole comes with a lot of experience under her belt: two terms as head of the Plant Biology and Breeding division; five years directing the Plant2Pro Carnot Institute, a key player in socio-economic partnerships for plant production in the service of the agroecological transition; and steering an interdisciplinary scientific foresight study on predictive approaches in biology and ecology. Neither the realisation of a childhood dream nor the fruit of a well-laid career plan, Carole explains how she got here: “I’m an enthusiastic person. I want to do things with drive and passion. It’s not about me, but about being open to possibility”. Carole was bitten by the research bug during a first summer internship when she was earning the French DEUG, a 2-year university general studies diploma, at INRA in Avignon. Several other internships in INRA labs followed, where she wrote her thesis. Her research focussed on genetics and resistance to disease in peppers and tomatoes. Then, Carole and her team discovered a molecular resistance mechanism preserved in the plant kingdom that allows plants to prevent viruses from replicating. Their findings earned them international recognition and Carole became more and more involved in leadership roles and scientific strategy before giving up research proper.  For her, it was “a fast and welcome evolution. Over the course of my career”, she continues, “I was lucky to meet extraordinary teachers, thesis supervisor, scientific colleagues and stellar INRA division heads who enriched me and believed in me. I think I was able to take their advice and answer the door when opportunity knocked”.

Steering the course, with a human touch

In 2012, when Carole agreed to take the helm of Plant Genetics and Breeding, she was faced with the task of merging a division traditionally focussed on targeted research geared toward socio-economic partners with the Plant Biology division, which was smaller in terms of staff and more focussed on basic research. Much to her surprise, Carole soon found herself in charge of the newly-formed division. Today, she very much appreciates the broad scope of the Plant Biology and Breeding division, “from world-class basic research, recognised internationally, to genetics, scientific experiments, genetic resource management and plant selection”.

Tapping into the hive mind

The merger was also enriching from a human point of view: “You can’t carry out targeted research and forge high-impact partnerships without a very solid foundation of basic research”. Working out a strategic plan and the division’s evaluation (2013-2014) were pivotal moments that also served to forge a sense of team spirit in the new division. To steer the course, Carole tapped into collective intelligence: “I have always liked working with groups, getting ideas going, working out a strategy and a vision. You have to get the best skills on board to make things happen”.

When asked, Carole says that her gender never got in the way, even noting, not without a touch of humour, that she was already the third woman to be named Head of the Plant Genetics and Breeding division in 2012… However, she appreciates the parity that has been achieved or is being achieved at INRAE: “a greater male/female balance means greater vision overall”, she says.

Toward agroecology with breakthrough innovations

After striking the right balance in the new division, Carole broadened her horizons by taking on a leading role in the Plant2Pro Carnot Institute, which continues to pursue very wide-ranging goals in genetics, plant breeding and biotechnologies, but also plant health with a focus on biological pest control, and finally agronomy, innovative crop systems, and digital farming. For all this, no less than 16 INRAE research units and three divisions work alongside three technical institutes.

Genetics is still a very competitive field that receives far more private funding than INRAE would be able to afford, for example in genomic selection. Carole explains, however, that “our research acts as a complement to, and an interactive part of, that which is carried out in the private sector”. For example, research into new traits for future crops that will become part of agricultural systems in line with agroecology requires that science get creative and set its sights on new horizons. The goal is to select plants that are more adapted to innovative farming systems and better exploit the microbiota of soil, or even to shift the focus onto “service” crops. “But industrial players won’t invest in these fields on their own”, explains Carole. “It’s too risky for them, even though the stakes for society at large are high. We steer our researchers toward this sector through incentives, scientific pursuits, and joint projects with partners”. Participatory research can be another source of innovation.

Carole will soon pass the baton for heading Plant2Pro to take on the top job of the public-private PlantAlliance consortium, which promotes plant genetics in all its dimensions to help design innovative crop systems that will ease through the agricultural transition. It’s a way of keeping one hand in her research field and staying true to her commitment to partnerships with socio-economic players.

The work-life balance of a woman in science

Carole is committed on all fronts, but is willing to share the keys to achieving balance: “I’m able to take a step back and look at things, which is important for these types of jobs”. She enjoys time spent with her large and blended family and friends, loves to travel, and practices sport. She makes a point of setting priorities for herself, even if it’s not always easy, “otherwise you end up working day and night”. That is why she keeps a close-knit team and puts all her trust in them: “I like delegating and I think I’m good at surrounding myself with the right people”.