In contrast to intramuscular vaccines, only nasal vaccines are able to block the virus in the nose by inducing local immunity in the nasal mucosa, i.e. the portal of entry and multiplication of the virus. The vaccine candidate, developed by the BioMAP team[1], would take position as the eighth nasal vaccine currently starting clinical testing in the world, and the only one based on viral proteins in France.

This SARS-CoV-2 protein vaccine candidate builds on the BioMAP team's expertise in mucosal vaccine design. In partnership with the biotech company Vaxinano, the team has already successfully developed an effective candidate vaccine to protect monkeys from toxoplasmosis. This stable, non-toxic and adjuvant-free nasal vaccine is based on a total protein extract from  Toxoplasma gondii, the infectious agent being produced by the team and further encapsulated in starch and lipid-based nanoparticles (Vaxinano technology). The SARS-CoV-2 nasal vaccine candidate is based on similar technology.

In a similar strategy, the SARS-CoV-2 vaccine protein component was designed and produced by the team, and then encapsulated by Vaxinano. The vaccine, consisting of the Spike protein with other viral proteins that are not prone to mutations, would protect vaccinated individuals regardless of the mutated circulating coronavirus variant strains.

This vaccine was first tested in vivo in a pre-clinical mouse model. Two nasal applications, three weeks apart, induced a strong humoral immune response – in particular of the mucosal compartment with neutralising Immunoglobulin A (IgAs[2]), which are polyspecific, i.e. more permissive against variation of the Sars-CoV-2 – along with a cellular response in the nasal cavities and lungs. The protective efficacy of the vaccine was also assessed in terms of survival and absence of clinical signs after infection on vaccinated animals, 100% of individuals survived with no clinical signs (respiratory distress, weight loss, etc.) unlike the unvaccinated control group. Second, the candidate vaccine was tested for contagiousness in the established Syrian hamster model, which mimics the human pathophysiology of COVID-19, again providing striking results with no viral detection in the lungs and nose of vaccinated/infected animals while unvaccinated/infected animals showed a high level of viral RNA in both lungs and nasal cavities. These results, highly predictive of the effectiveness of a vaccine in humans, allow us to predict that contagiousness between individuals is completely abolished. 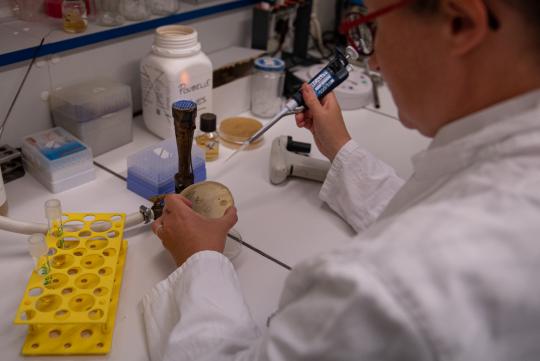 An easily administered, non-invasive vaccine as a first dose or a booster

Technically, the vaccine will be administered by means of a small adapter placed at the end of a needle-less syringe, allowing an ideal diffusion within the nasal cavity. Currently, a device developed for this vaccine specifically for humans is being evaluated in collaboration with the Recipharm/Resyca group. Non-invasive and requiring minimal logistics, this basic vaccination system would allow for a wider distribution to Europe and far beyond. Moreover, the vaccine is highly stable at room temperature and even longer at 4°C and thus would not require the strict logistics mandatory to maintain cold chain integrity, unavailable in most countries of the world.

A 100% French research and development consortium

Based on these results, the research team will rely on the skills of companies based in France, which have already been identified, to develop its vaccine for future clinical trials:

-GTP Bioways, a CDM[3], (Contract Development and Manufacturing Organisation) based near Toulouse,

-Recipharm, a manufacturer based in Monts, near Tours.

The transition to the clinical phase, supported by the ANRS/ Maladies infectieuses émergentes[5], is scheduled for the second half of 2022, with the perspective to bringing the vaccine to market in 2023.

Made possible by the financial support of the ANR and the Centre-Val de Loire Regional Council, as well as by the commitment of all the partners mentioned, this project still involves a number of stages to be completed before the vaccine is brought to market. It is set to provide a major improvement in the protection of populations, in terms of prevention, contagiousness, effectiveness on current and future variants, and increasing the percentage of people vaccinated and thus collective protection.

Interview with Isabelle Dimier-Poisson  (for English subtitles, click on parameters at the bottom of the video)

[1] The BioMap team of the Infectiology and Public Health joint research unit is directed by Professor Isabelle Dimier-Poisson, at the university’s department of medicine.

[2]  Immunoglobulin A (IgA) is an antibody isotype that plays a crucial role in immune function of the mucous membranes.  They are a first line of immune defence against toxins and infectious agents in the environment.

[3] CDMOs are pharmaceutical subcontractors whose core business is the manufacturing and packaging of medicines on an industrial scale.

[4] CROs are companies specialising in clinical trial organisation services for the pharmaceutical industry and for Public Scientific and Technical Research Establishments in France (EPST). CROs are involved in all phases of research and development particularly in the pharmacovigilance phase.

[5] Created on 1 January 2021, the ANRS/ Maladies infectieuses émergentes is the new autonomous agency of INSERM, created by the merger of the REACTing consortium and the National Agency for AIDS Research (ANRS) under the joint impetus of its two supervisory ministries, the Ministry of Higher Education, Research and Innovation and the Ministry for Solidarity and Health.

Identification of two pathways for SARS-CoV-2 entry into cells: towards new therapeutic strategies

PRESS RELEASE - SARS-CoV-2 is the virus that has caused the COVID-19 pandemic. Ideally, to prevent its spread, treatments should target the early stages of infection before the virus penetrates cells. A joint investigation by INRAE and Heidelberg University, Germany, has revealed the mechanisms by which the virus enters host cells. The results, published in EMBO Journal on 23rd June, show that SARS-CoV-2 uses two entry pathways: a fast route in cells expressing a specific protease* (TMPRSS2) on their surface and a slow route in cells devoid of this protease. These findings offer new perspectives for the development of antiviral strategies that would target both cell entry pathways adopted by SARS-CoV-2.

Research and innovation in animal health: a strengthened partnership between INRAE and Ceva Santé Animale

PRESS RELEASE - Philippe Mauguin, Chair and CEO of INRAE and Dr. Marc Prikazsky, Chairman & CEO of Ceva Santé Animale (Ceva), signed a first framework agreement aimed at consolidating their collaboration in animal health. This signature comes in the context of the Covid-19 pandemic and the outbreak of avian influenza in France. It affirms a shared objective of conducting joint "One Health” work, a global health concept at the crossroads of animal, human and environmental health and in particular, the prevention of infectious diseases of animal origin and the improvement of animal welfare.

Under the aegis of France, and notably the Ministry of Higher Education, Research and Innovation and the Ministry of Europe and Foreign Affairs, PREZODE, an initiative to prevent emerging zoonotic risks and pandemics, was announced on the occasion of the One Planet Summit for biodiversity held on 11 January. Three French research institutes - INRAE, CIRAD and IRD – teamed up with around ten other research bodies* in France, Germany and the Netherlands to launch PREZODE, which has already mobilised more than 1,000 researchers. This worldwide programme will combine research and practical steps. It was shared in December 2020 with more than 400 participants from 50 countries on 5 continents with the goal of open co-construction. International organisations like the WHO, OIE, FAO, UNEP**, the World Bank and European Commission have all expressed keen interest in the initiative.