To increase the attention paid to its research themes within the realm of European research, INRAE has developed a strategy for increasing its influence within European institutions, such as the Directorate-General (DG) for Research and Innovation, the DG for Agriculture and Rural Development, the DG for Health and Food Safety, the DG for the Environment, SCAR (the Standing Committee on Agricultural Research), and the European Parliament.

In tandem, the institute has established strategic partnerships with its counterparts in other European countries: 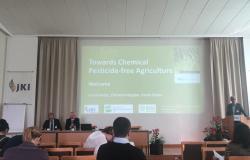 A strategy for encouraging and guiding research

To encourage its scientists to take part in European research programmes and to guide them along the way, INRAE has developed an integrated strategy that makes use of the candidates' research backgrounds, their research units and centres, specially trained representatives within the scientific divisions, and a system that provides training and information.